The governor wants to bar the ‘golden door’ to freedom, rather than light the pathway for those who most need to find it. 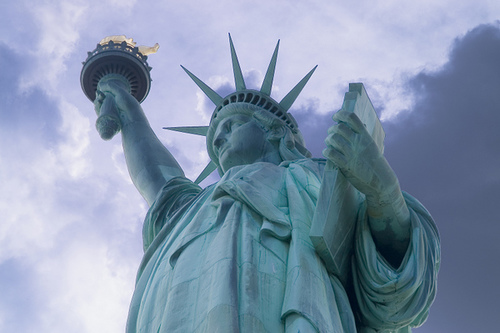 I have always considered the stirring words of Emma Lazarus to be the most patriotic ideal for which America stands:

Give me your tired, your poor,
Your huddled masses yearning to breathe free,
The wretched refuse of your teeming shore.
Send these, the homeless, tempest-tost to me,
I lift my lamp beside the golden door!

If ever there were people who are tired, poor, homeless, wretched, and tempest-tost, it is the Syrian refugees who have made their tortuous way into Europe trying to escape the barbaric Muslim-extremist violence of the Islamic State of Iraq and Syria (ISIS). The religious nihilism of ISIS followers has made civilians powerless against the capacity for violence ISIS has demonstrated countless times, as deadly in Paris as in Iraq and Syria.

It is these powerless refugees who have heard the promise inscribed on a bronze plaque as a part of the Statue of Liberty, a gift from the people of France to the United States nearly 130 years ago. The official name of the monument — “The Statue of Liberty Enlightening the World” — was a gift of friendship and is recognized as a universal symbol of freedom and democracy.

Where is the freedom symbolized by this monument in the words of Texas Governor Greg Abbott in a letter to President Obama:

Gov. Abbott’s words belittle and negate perhaps the greatest ideal of the American people since the Declaration of Independence declared that all people have unalienable rights — namely, the ideal that this country will be a refuge for those in the most dire need. The governor wants to bar the “golden door” to freedom, rather than light the pathway for those who most need to find it.

No one wants terrorists or criminals to settle in this country, whether through student visas, work visas, tourist visas, regular immigration processes, refugee status, or political asylum applications. Some right-wing commentators claim that Gov. Abbott’s position on Syrian refugees is justified because the perpetrators of the 9/11 atrocities entered this country legally.

However, such views ignore the enhanced surveillance activities and information-sharing (both internally and with allies) created by Congress after 9/11. These new processes and procedures should be capable of screening Syrian refugees to keep out any who may be deemed undesirable because of their past actions that show disrespect for our values of religious and political freedom or who have demonstrated they would be a danger to the well-being of our communities.

Undesirable people are in every nation, but singling out Syrian refugees for discrimination is as wrong as indiscriminately interning people of Japanese or German or Italian origin during World War II. Such actions by our government, whether in the federal system or in the states, stokes fear, resentment, and hatred among our people and appeals to the worst instincts of nativism.

All people who love freedom should reject the bigoted, xenophobic attitudes of Gov. Abbott. If there is a more unpatriotic and inhumane view than the one expressed by our governor, I can’t imagine what it is.