Lamar W. Hankins :
The dishonesty of Clemson and its football coach

Not only does coach Dabo Swinney use his personal Christian beliefs to recruit, he also uses religion to manipulate, control, and motivate his players. 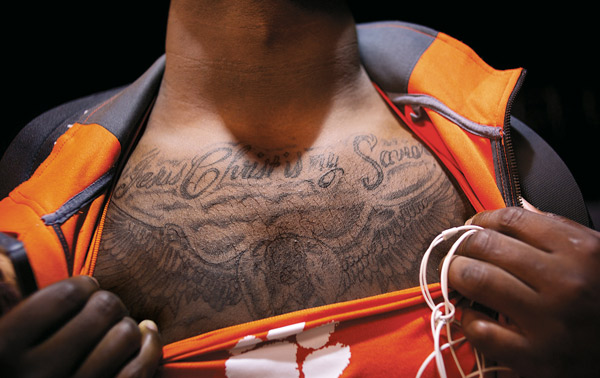 For the last half-century, Clemson University in Clemson, South Carolina, has been a coeducational, public institution. Lately, however, Clemson has seemed more like a private religious school.

Clemson’s head football coach, Dabo Swinney, recruits players based on his philosophy that being a Christian means that he has good values, so he lets all of his recruits and their families know that he is a devout Christian of the Baptist persuasion. Not only does Swinney use his personal Christian beliefs to recruit, he also uses religion to manipulate, control, and motivate his players.

Being religious has never assured that a person is moral, fair, kind, charitable, competent, or any of dozens more attributes one might want to associate with being religious. I suppose Swinney never knew that Hitler was a Christian (though he was Catholic, not Baptist), or that the Ku Klux Klan is a proud Christian organization.

What Swinney is, without doubt, is sanctimonious and disingenuous. In less judgmental terms, this is what the Freedom From Religion Foundation (FFRF) pointed out to Clemson when it filed a complaint recently charging that Clemson was violating the standard of separation of religion from government. A letter from FFRF staff attorney Patrick Elliott explained the violations of this standard:

[Swinney’s] religion is not the issue; it is his proselytizing in a public university football program. It is a bedrock constitutional principle that government employees cannot abuse their position to advance their religion. Unfortunately, the current climate of entanglement between the football program and religion sends a message of inclusion of fundamentalist Christian football players while excluding all others.

University records reveal that Clemson coaches are intimately involved in team bible studies, church services and other religious activities. Clemson University needs to take corrective action and ensure that coaches are not violating the Constitution. As it stands, the coach has failed to take responsibility for promoting Christianity as part of the football program and failed to state what, if any, corrective action he will take.

Swinney wants his football players to be “good citizens,” but he does not apply that standard to himself. Instead, he uses his public position (for which he is paid $3.15 million a year) to promote his brand of religion. And he has lots of supporters in doing so, including the university.

We believe the practices of the football staff regarding religion are compliant with the Constitution and appropriately accommodate differing religious views. Participation in religious activities is purely voluntary, and there are no repercussions for students who decline to do so. We are not aware of any complaints from current or former student-athletes about feeling pressured or forced to participate in religious activities.”

This is where disingenuousness rears its head again. Anyone who thinks that what a football coach and football team members do together is voluntary and unforced has never played football on a team where football is itself a religion, as it is at Clemson. The coercion doesn’t have to be overt. It is part and parcel of what it means to be a team player.

There are ways both subtle and obvious to pressure a football player to conform to the group’s behavior.

There are ways both subtle and obvious to pressure a football player to conform to the group’s behavior. However, considering the way Swinney recruits his players, it is doubtful that any start out expecting anything more than religious indoctrination along with learning the game plans, plays, and formations.

Among those rushing to Swinney’s defense were the Fox network’s hosts Clayton Morris and Tucker Carlson, along with Lou Holtz, football commentator and former head coach at Notre Dame for 11 years. Morris opened “The Fight For Faith” segment of Fox & Friends last week by asserting without evidence that “All over the country, Christian faith is under attack by atheists.”

Holtz said that he was tired of being bullied by atheists, that “atheism is a religion,” and that “now they want us to practice atheism.” Holtz did not explain exactly how one practices a lack of belief in a god.

As though he could see no difference between a private university and a public one, Holtz compared his experience at Notre Dame with Swinney’s at Clemson. And he dredged up the shibboleth — “no one on the team complained.” But what really seemed to infuriate Holtz is his claim that FFRF was demanding that Swinney give up his faith.

Of course, no one, least of all the FFRF, was demanding anything of the kind. What FFRF was asking is that Swinney and his university-paid football chaplain stop using their positions of influence over football players to proselytize for their personal religious views. Although the FFRF may disagree with Swinney’s religious views, it defends his right to hold them as a private individual, but not to push them on students from his position as a state official.

Morris favored having a football chaplain so that players would have someone to turn to voluntarily if they were having problems. None of the three men understood the difference between a “total institution” (a sociological concept) like the military, which has chaplains from a variety of religious and non-religious perspectives, and a football team, whose players can turn to whomever they might need in a personal crisis. Playing football is not like being out on a battlefield for weeks, months, or years at a time, isolated from such access. 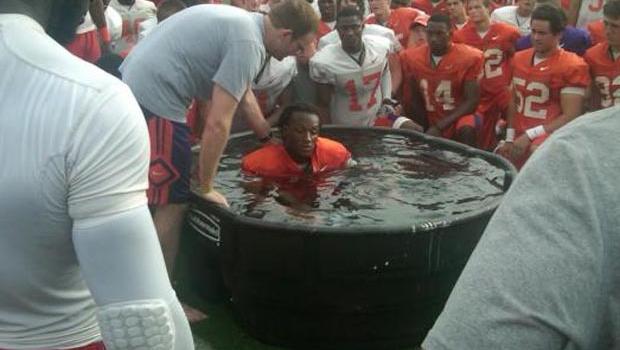 What Morris, Carlson, Holtz, Swinney, and Clemson officials all failed to acknowledge is the use of religion to build team solidarity. At least since the 1950s, football coaches have used religion as a psychological tool on which to build their team’s cohesiveness and camaraderie. They adopt a sort of “the team that prays together stays together” philosophy to win football games, or at least give the praying team an edge.

And in the case of Clemson, the teamwork went beyond mere prayers. Players were encouraged to attend revival-type meetings together (with personal testimonials and evangelizing) as part of the Fellowship of Christian Athletes, which Clemson’s football chaplain sponsored.

During the 2012 season, one player even had an immersion baptism joined by other players on the football field at the end of practice. I’m sure the event pulled all the team members closer together, unless one was a Jew, or Buddhist, or atheist, or whatever. And there have been some prominent atheist football players. Pat Tillman was one.

Religion can not only create cohesiveness, it also helps to control players. Slave masters used religion for the same purpose. Calling on the power of God to convince a young man to mend his ways can be a powerful tool in the hands of an authority figure like a football coach, who can end a college experience with the stroke of a pen. With God on his side, he has an extra measure of control. If invoking a supernatural actor helps produce a winning season, most coaches are concerned only with that result.

Clearly, such mind games can be effective. Football coaches have always sought ways to motivate or manipulate their teams to greater achievements. Jimmy Johnson studied psychology in college so that he could learn techniques to get better performances from his players. Apparently his studies paid off.

Sometimes, even placebos can help. My senior year in high school was supposed to be a championship year for the football team at Thomas Jefferson High School in Port Arthur. But halfway through the season, we were at five losses and no wins. Our head coach had to come up with something to change this sorry state of affairs.

Football coaches will do almost anything to win, and so will their supporters.

He announced that we would start getting vitamin B12 shots from the team doctor every Friday morning to boost our energy and give us more stamina for our Friday night games. Of course, this was utter nonsense, but none of the players knew that. We won three of our last five games. Football coaches will do almost anything to win, and so will their supporters.

To keep Clemson football in the religious business, Swinney’s supporters have attacked the FFRF as an interloper, coming in from Wisconsin to tell them what to do. It happens that the national headquarters for FFRF is in Madison, but I learned in school that we were citizens of the United States, which means that we have the right to operate freely anywhere within the 50 states.

No one should be seen as an outsider anywhere. No passport is required to travel from Wisconsin to South Carolina. And Clemson makes use of players from around the country — Ohio, Texas, Arkansas, Tennessee, Virginia, Georgia, and Alabama are all represented on the team, though most come from North and South Carolina.

The “outsider” claim is as bogus as the voluntariness claim. We are all governed by the same Constitution. Clemson faculty and coaches are required to honor the separation of government and religion just as much as someone in the same position in California or Maine. We are supposed to be “one nation, indivisible,” as the original pledge provided, before the politicians amended it to assert their anti-communist bona fides in 1954.

Some have floated the idea that Clemson’s religion-in-football approach is okay because Swinney tells the recruits up front that he’s going to push his personal religion on them. That makes as much sense as saying that being told up front that a football team will not recruit black players makes it okay. After all, if a player disagrees, he can go play somewhere else.

I suspect that the primary reason Swinney has gotten away with his religion-in-football approach for so long is that he is in an area of the country where most of the population is Christian. If Swinney were Muslim and pushing Allah on all his recruits, is there anyone who can honestly doubt that it would have been stopped before sundown on the first day Swinney was at Clemson?

What is going on at Clemson reeks of hypocrisy. It is intellectually dishonest at best. At worst, it is sophistry in the service of the majority’s religious views, to the detriment of the consciences of the rest of us, and to the Constitution.

1 Response to Lamar W. Hankins :
The dishonesty of Clemson and its football coach