Lamar W. Hankins : The Gospel According to Tebow 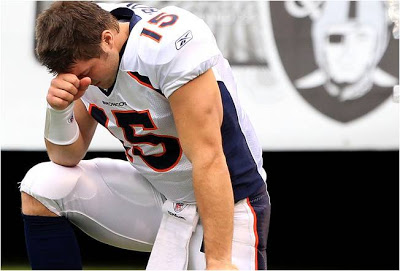 Denver Broncos quarterback Tim Tebow shown “Tebowing.”
Whose side is God on?
The Gospel according to Tebow

I don’t normally write about an individual’s religious beliefs unless that person is a politician using religion to further his or her political career. But the religion of Tim Tebow, the current quarterback for the Denver Broncos, fits into that genre, although Tebow uses his religion to boost the performance and popularity of a pro football team and his ambition to be a winner, rather than to boost political ambitions.

For those who don’t know, whenever Tebow scores a touchdown, he drops to one knee and assumes a prayerful stance, presumably thanking his God for making his success possible. Tebow is not alone in such public demonstrations of piety. Many football players who score for their teams engage in similar acts of religious fealty.

Some touch an area near their heart and point upward to the sky, the usually accepted location for God’s residence, as though giving God credit for their athletic accomplishment. Others kneel and make the sign of the cross, or some combination of religious demonstrations. Often, field goal kickers, just before the ball is snapped, cross their chests in the manner of priests invoking the blessing of the Father, Son, and Holy Ghost.

I’ve never understood why linemen don’t do the same for an excellent block they have made which allowed a halfback to break through the line and score, or gave time for the quarterback to throw a touchdown pass. Maybe players think God deserves credit only for the points on the scoreboard, not the grunt work it takes to make those scores. When Tebow gets around to writing his gospel for all to read, perhaps he will explain this aspect of the game.

There are other things I don’t understand about Tebow’s Gospel. Why doesn’t God help him throw better passes? He is a weak passer, with a lousy passing percentage. One would think that making Tebow a better passer would take some of the work out of making the Broncos a winning team. But maybe God likes to keep Broncos fans on edge. It makes the games more exciting than would a five touchdown lead.

But Tebow doesn’t stop with such public displays of righteousness. He talks up his religion constantly to fans, reporters, and teammates. Apparently, the entire Bronco team has embraced Tebow’s religion; maybe they figure it wins games for them.

I always thought that Jimmy Johnson, the former winning coach at the University of Miami and the Dallas Cowboys, was smart to study psychology as an undergraduate, even if he never intended to use that knowledge to produce winning football teams. He parlayed what he learned about motivation and human nature into an exceptional career in football that any coach would be pleased with.

Tebow may not have knowledge of psychology to help him, but he has learned the basics about group solidarity, optimism, and Norman Vincent Peale’s “Power of Positive Thinking.” He uses his religion to motivate, inspire, and achieve cohesiveness among his teammates. As long as he continues to give them confidence and help them win, few people in Denver are likely to object to his public displays of religious fervor. But if the winning stops, belief in Tebow’s leadership may wane, as may the Broncos’ reliance on religion to augment a mediocre team.

What Tebow has learned, whether intentionally or as a by-product of his piety, is nothing new to those who have played team sports, especially football. My high school football coaches encouraged (though, as a practical matter, we had no choice) the team to gather on bended knee before games (and sometimes afterwards) to recite The Lord’s Prayer in unison. The coaches knew that this praying together created group cohesion, especially in a demographically select group of Christians. I don’t know what might have happened if one of the few Jewish boys in our high school had been a football player.

The practice also resulted in an aura of supernatural power hovering over the team. If the players thought that God was on their side, it might give them more confidence to stomp the hell out of the other team. This was not a time to think about the Beatitudes.

In trying to understand the Gospel of Tebow, I have wondered why he doesn’t thank God for his mistakes as well as his accomplishments. After all, if God is helping him score touchdowns, the opposite must be true as well. When the team runs three lackluster plays and has to punt, why doesn’t Tebow thank God for helping him be more humble?

The huddle is a perfect place for all the players to take a knee for three seconds, praise Jesus, and call the next play, which might just be a doozy after paying homage to a God so awesome that he takes sides in a football game.

But such God-directed football inevitably leads to the problem of what God might do if two opposing football teams had a similar, if not equal, adherence to the Gospel of Tebow. How would God split the football baby?

We know that Solomon was wise enough when confronted with claims by two women that they were both the mother of a baby to offer a solution that demonstrated the superior compassion of one of the women, who was then awarded the baby. But how does this story relate to who wins a football game?

After all, in pro football we have “sudden death” to decide the winner in games that are tied after four quarters of regulation play. Of course, God could just not allow a score for 15 minutes of sudden death overtime play and the game would end a tie. Somehow, this doesn’t seem particularly Solomonic, however.

Lest someone think I am begrudging Tebow his heart-felt religion, be assured that I believe Tebow is entitled to practice his religion in any stadium anywhere. His practice does me no harm. What it does do is cause me to question the depth and wisdom of his belief in a God that cares about the score of a football game. What sort of God is so trivial that he/she/it would be concerned with football while there is so much suffering of innocents in this world?

I simply couldn’t understand how there could be a good and powerful God who’s in control of this world given all the pain and misery in it. We live in a world in which a child starves to death every five seconds, a world where almost 300 people die every hour of malaria. We live in a world ravaged by earthquakes and tsunamis and hurricanes and drought and famine and epidemics…

And I wonder why Tebow’s “good and powerful God” gives a damn about the Denver Broncos or any other football team, but not about the millions who suffer through no fault of their own. When Tebow can explain that to me, his public piety may make some sense. Until then, it appears to be nothing more than the same crass use of religion for private gain practiced by so many of our politicians.

2 Responses to Lamar W. Hankins : The Gospel According to Tebow