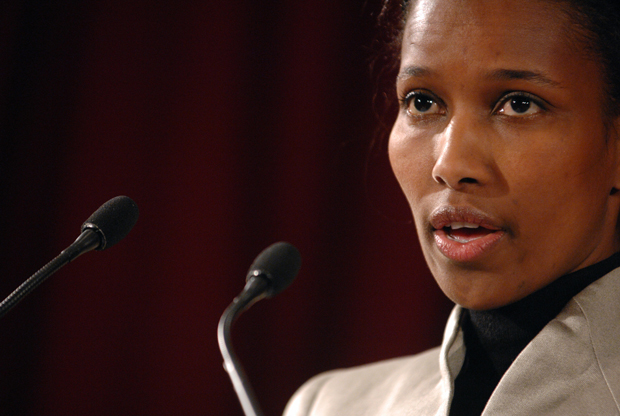 The Somali-born writer Ayaan Hirsi Ali was to be the commencement speaker next month at Brandeis University, named for former Supreme Court Justice Louis Brandeis. But voices of hysteria, censorship, and bullying won the day and Brandeis University’s president rescinded the invitation and the honorary degree she was to receive because of Hirsi Ali’s outspoken criticism of the widespread Islamic degradation and denigration of women.

I read her autobiographical book Infidel seven years ago. Her life story is compelling, educational, and unique. She left Somalia with her family as a little girl because of the civil strife in that country and lived in Saudi Arabia, Ethiopia, and finally Kenya. At the age of 21 she immigrated to the Netherlands, eventually becoming a member of the Dutch Parliament.

Because of her support for and work with Theo van Gogh in exposing the mistreatment of women in Islamic-dominated cultures, her life was threatened (van Gogh was shot to death on a street in Amsterdam). Eventually she sought asylum in the U.S., but the threats against her life did not end. She continues to require body guards for protection against Islamic extremists who seek to kill her.

I have not always agreed with Hirsi Ali. She worked for a time with the American Enterprise Institute, espousing dogmatic libertarian views. She is now a fellow at the John F. Kennedy School of Government at Harvard.

After reading some of her essays and listening to some of her speeches, I have thought her criticism of Islamic practices too expansive.

After reading some of her essays and listening to some of her speeches, I have thought her criticism of Islamic practices too expansive. She seems given to unsupported generalizations and often seems to equate cultural practices she encountered in her own life with Islam, when the religious doctrines of Islam do not require the practices (such as female genital mutilation). If she sweeps with too broad a brush when discussing Islam, that is easily remedied by other voices who are free to speak out in opposition to her views.

And that is the point for me. If a university in the U.S. cannot tolerate controversial views, it has no reason to exist. As Justice Brandeis understood, “enforced silence” does nothing to further a discussion from which we all can learn. More than once, I have picketed a speaker and then gone into the auditorium to listen to his views — a process that allowed me to be better informed in my criticism of the views he expressed.

Brandeis University was bullied by a petition supported by the university’s Muslim Student Association.

Brandeis University was bullied by a petition supported by the university’s Muslim Student Association. Opponents of Hirsi Ali on the Brandeis campus seem more in tune with the worst theocratic practices of Muslim-dominated countries, where suppression of undesirable ideas is forced on the population by threat of imprisonment or death.

Could it be that some of the opposition from Muslim students is because Hirsi Ali is an apostate and the students could not tolerate hearing the views of such a person? Whatever is the case, the symbolic stoning of Hirsi Ali’s voice will resonate against the reputation of Brandeis for a long time.

It seems self-evident to me that the answer for speech one doesn’t like is more speech, not less. Brandeis University has forever been tarnished by its suppression of a valued, though imperfect, voice for human freedom and women’s rights. Her courage is as impressive as her life story. It is a story that all people, especially graduating university students, could learn from. That, after all, should be a main purpose of a university.