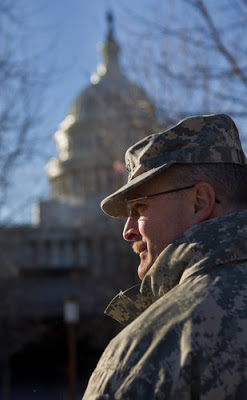 How quickly Americans lose interest in war when so few families are affected by its consequences. The wars in both Iraq and Afghanistan have done little more than acquaint much of the public with the geography of the Middle East.

Now, a rare truth-teller who works at the Pentagon has filed an extensive report, one year in the making, telling the military brass, the Congress, and the President just how dishonest the Pentagon and its civilian leadership have been about the war in Afghanistan.

Lt. Colonel Daniel Davis has risked his career — in just two and a half years he will be eligible to retire — to tell our government and the American people the truth about the futility and folly of continuing to risk the lives of our men and women in uniform serving in Afghanistan. He reports his concerns, as well, that continuing the war will kill countless innocents. This is a country that has known virtually perpetual war for more than 40 years, and been the locus of periodic war since the days of Alexander the Great nearly two and a half millennia ago.

This war has lasted for over 10 years, yet many Americans seem to have lost focus about what took us there. We were trying to capture or kill Osama bin Laden and his al Queda supporters who were then living in Afghanistan. But they all left shortly after the bombing started, and we committed more than 100,000 troops to the deadly affair.

After that, the mission morphed into occupation and regime change, then to the promotion of democracy, followed by training Afghans to control their own country with military power through counterinsurgency.

The Afghanistan War began after the terrorism of September 11, 2001, with congressional approval, opposed only by one congressional official, Rep. Barbara Lee (D-CA).

The faulty foundation of this American debacle has been explained by law professor Marjorie Cohn (Thomas Jefferson School of Law), a specialist in international law:

[T]he U.N. Charter provides that all member states must settle their international disputes by peaceful means, and no nation can use military force except in self-defense or when authorized by the Security Council. After the 9/11 attacks, the council passed two resolutions, neither of which authorized the use of military force in Afghanistan.

the invasion of Afghanistan was not legitimate self-defense under article 51 of the United Nations charter (to which we subscribe) because the attacks on Sept. 11 were criminal attacks, not “armed attacks” by another country. Afghanistan did not attack the United States. In fact, 15 of the 19 hijackers came from Saudi Arabia.

Had there been an imminent threat of an armed attack on the United States after September 11, President Bush would not have waited three weeks before initiating his bombing campaign against Afghanistan.

Professor Cohn cites a classic principle of self-defense found in international law and affirmed by the Nuremberg Tribunal and the UN General Assembly: the necessity for self-defense must be “instant, overwhelming, leaving no choice of means, and no moment for deliberation.”

This principle was not in play in our attack on Afghanistan.

In the fall of 2001, President Bush explained his reason for attacking Afghanistan: the Afghan rulers, the Taliban, were harboring Osama bin Laden and training terrorists. Most Americans seem to have forgotten that the Taliban offered to negotiate with the United States, but Bush did not want to reveal the specifics about why he thought Osama bin Laden and al Queda were responsible for the attacks, an assumption that few have quarreled with.

He preferred to attack rather than talk, even for a few days. And Afghan citizens and American and allied fighters have paid the price with their lives ever since — about 40,000 civilian deaths; nearly 3,000 military coalition deaths.

American taxpayers are on the hook for over half a trillion dollars (and counting) that has been borrowed to carry out the changing missions of the Afghan war. Together, the wars in Afghanistan and Iraq are approaching $1.5 trillion on the American credit card. So much for fiscal responsibility!

Now, in the midst of all this fiscal and human carnage, Lt. Colonel Davis spent a year during 2010 and 2011 on special assignment from the Pentagon to assess the war, especially to find out what our troops on the ground need and get that assistance to them. This assignment came after he had completed four tours of duty since 9/11 — two in Iraq and two in Afghanistan.

What he reported demonstrates the deceit inherent in governments gone mad with war as the solution to international problems. Davis had hoped to find evidence to support the assessments made by our military leaders in Afghanistan, but his report — “Truth, Lies and Afghanistan” — arrived at this conclusion:

Senior ranking U.S. military leaders have so distorted the truth when communicating with the U.S. Congress and American people in regard to conditions on the ground in Afghanistan that the truth has become unrecognizable.

His report was produced in two versions. The main difference is that the classified version is starker in its details than the unclassified one, but they tell the same story.

Davis traveled over 9,000 miles in Afghanistan during 12 months to complete his assignment. He spoke to American military personnel at every level. He went on mounted patrols, dismounted patrols, and coalition patrols in every part of the country where the current counter-insurgency is occurring.

He explained in an interview on Democracy Now! how a counter-insurgency has to be managed if it is to succeed:

[I]f you’re going to go into one and to try to win it, there are several things that have to happen, and all of them have to happen to one degree or another. Number one is that the host nation government has to be at least minimally capable, within cultural norms. The local security forces have to be minimally capable to be able to handle the security environment that exists, whatever that happens to be.

The people of the country have to be supportive of the host nation military forces and government. And the enemy forces, the insurgent force, has to be at least knocked down enough to where they can eventually be handled by the local forces alone. All of those things have to happen to one degree or another. And as I’ll argue, virtually none of them are the case in Afghanistan.

To drive his point home about the inadequacy of the Afghan security forces, he found everywhere he went that Afghan forces would engage the enemy only if attacked directly by them, but would not go outside their compounds or checkpoints to chase them, attack them, or harass them.

The insurgents have virtual free rein in Afghanistan anywhere coalition troops are not working or Afghan security forces are not stationed. And what American troops are doing he calls tactical activity — “We went on patrols, we went on attack missions, etc., but never enough to actually turn the tide militarily. And we now see graphically that’s exactly what didn’t happen.”

Lt. Colonel Davis’s assessment of our Afghan war is blunt:

[W]hen you’re given a mission that cannot — cannot — succeed militarily, then what is the purpose of the mission? I mean, why are we even doing this, if the United States is not benefited? … But we have to be incredibly careful about giving those soldiers and those leaders missions to ask them to put people’s lives at risk, to risk their own lives, when the United States is not going to be benefited militarily or any other way. That’s a problem.

When asked why he is willing to risk his military career to speak the truth as he discovered it in Afghanistan, Davis explains:

[T]here are thousands of Americans [fighting in Afghanistan] who are alive, full of body, full of hope, full of dreams, want to accomplish many things, have families, etc., who, known but to God, are marked for either death or wounding or having their limbs blown off or their genitals blown off in between now and this so-called end of fighting season 2013.

And if you can’t tell me that they’re going to gain some benefit for my country, I just morally cannot keep quiet. … I mean, the Army is built on what’s called the Army Seven Values, and it’s so important that we constantly reinforce those — you know, honor, integrity, moral courage, you know, those kinds of things that need to animate everything that you do.

And one of the things we’re taught is that, you know, if you see something that’s wrong, you’ve got to have the moral courage to do something about it. And in my view, this fell right into that category. So, you know, loyalty is one of those values, and I believe that I — my loyalty to the soldiers in the service who are still alive and who are still not wounded, but… will lose their lives or will lose their limbs or… suffer casualties and wounds in between now and then, I just owed it to them to do whatever I could to try to bring light to this, so that we can avoid that, if at all possible.

Author Chris Hedges has written about a “myth of candor” that envelopes all wars:

There is no more candor in Iraq or Afghanistan than there was in Vietnam, but in the age of live satellite feeds the military has perfected the appearance of candor. What we are fed is the myth of war. For the myth of war, the myth of glory and honor sells newspapers and boosts ratings, real war reporting does not.

Lt. Colonel Davis has exploded that myth of candor, and given us truth. No American can now say that he or she didn’t know.

This column is dedicated to the memory of my friend, the late Margret Hofmann, who as a teenager survived the horror of the allied bombing of Dresden before immigrating to the U.S. and becoming a life-long opponent of war. She died this past February.