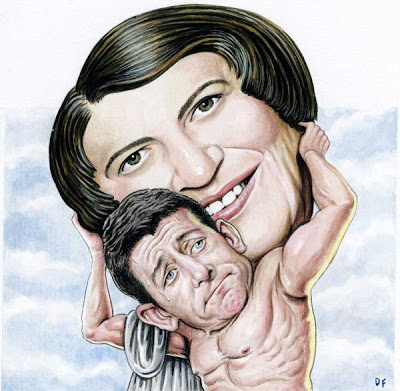 Paul Ryan is an extremist on issues of restricting personal liberty and using government to benefit the wealthy to the detriment of middle- and low-income families, and he is a hypocrite when it comes to fiscal conservatism.

Glenn Greenwald did a masterful job for Salon.com the other day outlining much of the evidence that demonstrates Paul Ryan has not acted to constrain government spending, nor to constrain the government during his time in office. For over a decade, Ryan has voted for the expansion of federal debt and the restriction of individual liberty almost every time he has had a chance to do so. How is such a person a conservative?

As Greenwald explains, Ryan presents himself as an Ayn Rand “Super-Hero of Individual Self-Reliance and Working Class Warrior against government debt, waste, and intrusiveness — whose actual life is a testament to the precise opposite values.”

Ryan managed to go to college after receiving Social Security survivor’s benefits through his high school years after his father died at an early age, benefits which he claims he saved up to pay for college. As Joan Walsh explained recently in Salon magazine, Ryan has “become the scourge of the welfare state, a man wholly supported by government who preaches against the evils of government support,” and he has become famous for “trying to dismantle the very program that helped him go to the college of his choice.”

After receiving a B.A. with a double major in economics and political science from Miami University of Ohio, he spent a few years on the payroll of several politicians and right-wing think-tanks. Occasionally, in the years before he became a Congressman at age 28, Ryan worked briefly for the family-owned construction business when he needed money.

Ryan seems incapable of acknowledging that government is a collective endeavor to cobble together a system that will make possible economic and social endeavors that can make life fulfilling for all the people. That’s the promise of our Constitution and the government it created. But Ryan has tried to fashion an image of himself as a self-made man who wants government to go away because it is not needed.

I recognized shortly after graduating from the college of my choice that I was able to go to college because of the sacrifices made by my parents, the excellent public school system I attended, the public transportation system that took me to school for several years, the public library I used regularly while in high school, the public roads over which I traveled to get to college and return home to visit my parents, the public postal system that allowed me to stay in contact with my family (and receive occasional checks for incidentals), the air traffic control system that looked out for my safety when I flew in an airplane, and the myriad other programs established for the safety of all Americans — food safety, water purity, air pollution control, mosquito eradication (particularly important where I grew up), flood control, fire protection, and police protection.

It was about the same time that I learned about the large sums of crop support payments paid to farmers in the county where I worked — payments that no one referred to as welfare, while assistance for other people was frowned upon and derided. I realized that all such government assistance was part of an effort to equal the playing field and create a fairer system so that the entire nation could prosper, no matter what personal circumstances or natural events interfered.

Obviously, there were abuses — it’s a system organized and operated by humans whose natures need to have some controls. Some people who received assistance did not need it, but the basic idea was to create a system that acknowledged that we were all in this together, and if we worked together, helping one another when needed, we would all be better for it. However, that spirit of cooperation was not infused in everyone equally.

Many years later I began figuring out that the tax system was rigged for the benefit of the wealthiest among us. All during this time when I was working, I paid payroll taxes on my entire salary to support the Social Security and Medicare system, but higher-paid workers did not have to pay those same taxes on much of their income. We allow major industries, such as the coal, oil, and natural gas companies to produce their products or conduct their businesses in ways that pollute our environment and leave the taxpayers to pay for the costs of environmental cleanup and health care for people damaged by pollution.

In a 2009 report, the National Research Council (NRC) estimates that the hidden costs of energy production in 2005 were $120 billion. Economists refer to these costs as external costs, including the economic effects to human health, structural damage, and the reduction in harvests caused by air pollution.

As the study explained, these external costs are hidden “because they are not reflected in the market prices of coal, oil, other energy sources, or the electricity and gasoline produced from them. Health damage from air pollution associated with electricity generation and motor vehicle transportation was found to be the largest single impact.”

During the 1960s and 1970s, my government spent nearly $600 billion to fight a war in Southeast Asia, a war that I did not support; but I was compelled to pay for it under threat of losing what little property I owned. The same sort of politicians who voted for the Vietnam War also voted for Bush’s two wars that have been continued under Obama and have cost the taxpayers about $3.7 trillion to date, according to Brown University’s Watson Institute for International Studies.

Ryan has supported all of these expenditures as a Congressman and wants to spend even more on defense in the years to come. His support for wars and interventions overseas suggest an extremist view about the role of the U.S. in the world, believing that “American Exceptionalism” gives us the right to tell the rest of the world how to act. In what way are these the actions of a fiscal conservative, or any kind of conservative?

Ryan voted for the expansion of Medicare to pay for prescription drugs (in a way that favored the pharmaceutical industry) and for the Wall Street and bank bailouts at the end of Bush’s second term. In fact, Ryan seems to have no problem with propping up the too-big-to-fail banks with an annual $60 billion subsidy, while extolling the virtues of the Free Enterprise system.

Also, Ryan is all for the government-sponsored patent system that gives pharmaceutical companies 20-year patents on prescription drugs. Dean Baker reports that these government-created monopolies cost taxpayers $270 billion more a year than they would pay in a free market system, and that there are efficient alternatives to financing drug research (see the Center for Economic and Policy Research report authored by Baker in 2004). In what way are these the actions of a fiscal conservative?

When it comes to restraining the power of the federal government, Ryan can always be counted on to support the government and diminish the liberty of all citizens. He voted for the original PATRIOT Act, its later modifications, and then to make its intrusive government powers permanent. He voted for the Military Commissions Act, which provides indefinite detention apparently for both resident aliens and U.S. citizens, who can be denied the Constitutional right of habeas corpus under the Act — the right to have a court compel the government to justify its detention of such people.

Ryan voted for the Protect America Act of 2007 to expand the power of the government to eavesdrop on Americans without court authorization for up to one year if the conversation involves talking to a person “reasonably believed to be outside the United States.” In what way are these the actions of someone who wants to restrict the power of the federal government?

Ryan has voted to deny same-sex couples the right to marry or to adopt children. He wanted to continue the military policy of discriminating against gays in the military. He wanted a Constitutional amendment to make flag-burning a crime. He favors the restriction of abortion rights, even supporting criminally prosecuting women who have an abortion.

He has sponsored legislation to give a fertilized egg the constitutional rights of a person, though millions are destroyed nationally each year in the normal process of nature, making such a declaration irrelevant and foolish. His legislation would criminalize in vitro fertilization and some forms of birth control. In what way are these the actions of someone who wants to restrict the power of the federal government?

Ryan claims to be an Ayn Rand libertarian, but he opposes medical marijuana and needle-exchange programs to reduce the spread of diseases among drug addicts. He opposes all drug use, including recreational marijuana. As Congressman Barney Frank said two years ago in a discussion with Ryan and George Will, it should be an embarrassment to conservatives that they want to tell people whom they can have sex with, whom they can marry, what they can read, what they can smoke.

Frank ended the discussion with the observation, “It’s the conservatives who want to intrude on personal liberty.”

As Glenn Greenwald recently concluded, “Whatever one wants to say about Ryan’s record, it is the very opposite of constraining the power of the federal government to intrude into the lives of individuals; indeed, it’s a testament to massive expansion of intrusive federal government power in almost every realm.”

While I am not happy with how President Obama has handled many of these same issues, it seems plain to me that Paul Ryan, Mitt Romney’s pick for his vice-presidential running mate, is an extremist on issues of restricting personal liberty and using government to benefit the wealthy to the detriment of middle- and low-income families, and he is a hypocrite when it comes to fiscal conservatism. His views about America’s role in the world can fairly be described as megalomaniacal — an all too common view among many, if not most, Americans, who seem to believe that America has the right to do anything, anywhere.

I agree with Ryan that our government needs to change its ways. But the change Ryan wants will take us further from a government that honors the purpose of our Constitution: “to form a more perfect Union, establish Justice, insure domestic Tranquility, provide for the common defence, promote the general Welfare, and secure the Blessings of Liberty to ourselves and our Posterity. . .”

Ryan would diminish justice in an already harsh system, destroy the minimal economic supports provided for our most disadvantaged citizens, engage in more interventionist wars abroad, push the government to provide more benefits for the wealthy to the exclusion of all others, and further constrain our liberties.

To call Ryan’s political goals “free market conservatism” is Doublespeak at its most dishonest and shameful.