Landrieu and the Saints : A New Day for New Orleans? 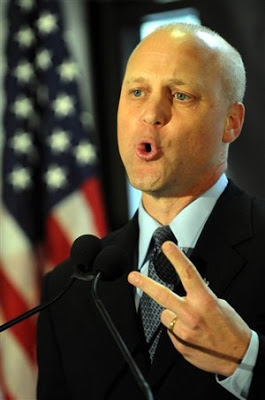 NEW ORLEANS — In a city consumed by the Superbowl and Mardi Gras celebrations, New Orleans elected a new mayor last weekend. Mitch Landrieu, the state’s current Lieutenant Governor, won 66% of the vote — twice the total of the other 10 candidates combined. Landrieu will be the city’s first white mayor since his father held the office, from 1970-78. Troy Henry, a former Enron executive, came in second place with 14% of the vote. Fair housing lawyer and progressive activist James Perry came in fifth with 3%.

Voters also made selections in a wide range of other races including sheriff, coroner, assessor, several different judgeships, and all seven city council seats. In contests where there were three or more candidates and no one received more than 50% of the votes, there will be a runoff on March 6.

The elections marked the consolidation of a change in the city’s political power structure. For more than three decades, most elected positions in the city were in Black hands. But now, in the context of mass displacement after Katrina — as well as low voter turnout — that has changed. For the first time in more than 30 years, New Orleans will have a white mayor and a 5-2 majority-white city council.

For now, the city is united in an ecstatic euphoria over its first-ever Superbowl championship and for a beautiful moment it seems like the country’s attention and support is focused on New Orleans. It’s an open question whether the city’s new political leadership can keep this often divided city together, and direct this attention and goodwill towards a much-needed revitalization. Even within the celebration, there are worrying signs.

On Saturday, January 30, the first major parade of Mardi Gras season — called Krewe du Vieux — rolled through the Marigny and French Quarter neighborhoods. The parade is known for it’s biting and often obscene satire, with floats often featuring the city’s public officials in graphic sexual poses. This year, the majority of floats depicted Mayor Nagin. He was a pig being roasted on one float, Nero fiddling while Rome burned on another, and buried in a cemetery in another.

Ray Nagin has not been a great mayor. In fact, as the city’s first businessman mayor, he has narrowed the public sector. He has been a champion of the demolition of public housing and has done little to fight the demolition of Charity Hospital, the city’s provider of free public health care. But many of those who have demonized the mayor (recent polls gave him less than 5% approval among white residents of the city and about 20% among Black residents) are missing their mark.

The problems in New Orleans began long before Nagin was elected, and were multiplied and amplified by Hurricane Katrina. New Orleans needed tens of millions of dollars to rebuild its infrastructure even before the Hurricane. Schools were falling apart, public transportation was unreliable, and the city’s tourist-based economy offered few career opportunities.

Today, more than 60,000 residential addresses — about a third of the city’s homes — remain empty or abandoned. The city has one of the nation’s highest murder rates, a homeless population estimated at above 12,000, and a police department facing federal investigation for a wide range of crimes, including post-Katrina killings of unarmed civilians. Even if we had a great mayor, it would not be enough. The city needs federal support and visionary leadership from all branches of government. Only time will tell if those needs will be met.

[Jordan Flaherty is a journalist, an editor of Left Turn Magazine, and a staffer with the Louisiana Justice Institute. He was the first writer to bring the story of the Jena Six to a national audience. Haymarket Press will release his new book, FLOODLINES: Stories of Community and Resistance from Katrina to the Jena Six, in 2010. He can be reached at neworleans@leftturn.org.]