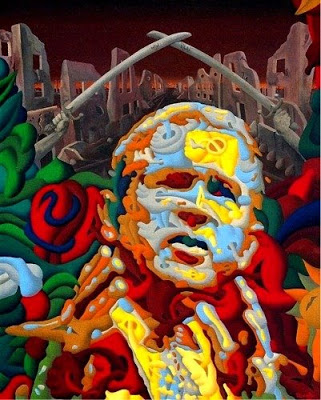 ‘George W. Bush and the Iraq’ by Werner Horvath
The NeoContry Fair

there’s William Kristol’s shrunken head and Karl Rove’s vestigial tail
have a piece of Richard Perle sent to you via U.S. mail
buy a single lock of Condeleeza’s petrified hair
when you see it you’ll be shocked but really try hard not to stare
cause it’s inside a locket made of an Iraqi family’s flesh
and when it’s opened it plays Toby Keith performed by John Tesch