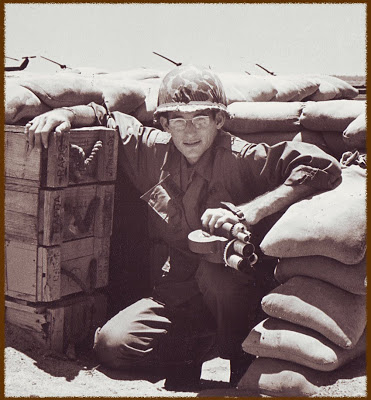 Afghanistan is an even older and thornier problem [than Vietnam]. And one that cannot be bombed into submission.

Forty three years ago as a young civilian correspondent and documentary filmmaker, I stepped off the plane in Saigon knowing nothing about the history of that country or its people, and little or nothing about why Americans were fighting and dying there. I had come to see the war of my time.

As a U.S. Navy veteran and young news anchor for a South Texas regional TV station it seemed a given that we were there to fight godless communism and that we were the good guys.

It was 1966 and WWII had been over for 21 years and hostilities in Korea had ceased in 1953. But Americans still saw our military and patriotism as Johnny marching home again to ticker tape parades. We had whipped the Nazis and the Japs, and fought the North Koreans and commie Chinese to a draw. Clearly American might was not to be messed with.

But by 1966 America’s claim of winning an honorable peace in South Vietnam was being seriously challenged by seasoned journalists in both Saigon and Washington D.C.. About the time I arrived, Morley Safer filed his story showing our Marines using a zippo lighter to set fire to thatch roofed homes in a rural village on a “search and destroy” mission. His was perhaps the first story that Americans saw that suggested America was facing bleak prospects of victory. We damn sure were not winning hearts and minds.

After a few months of sitting through bogus U.S. military press briefings which we called the “five o’clock follies,” and working with seasoned reporters from around the world, my Boy Scout naiveté disappeared. After a year of the outright lies and misrepresentations in Pentagon and White House press releases about things I had seen with my own eyes, my naiveté turned to a frustrated, simmering anger. An anger that was ultimately taken to the streets across America just a few years later.

Since the Vietnam War, accredited correspondents have no longer been allowed to freely move about and report on our wars. Reporters are now “embedded” within military units under their control and influence.

The parallels between America’s disastrous involvement in Southeast Asia and our costly and ill-advised involvement in the Middle East have fired up that frustration and anger anew. This time opposition by the average American to requests for more troops in Afghanistan is getting louder before the new call for 40,000 more troops has even been approved.

Our involvement in Vietnam started in 1950. General Eisenhower’s decision to send military advisers to help the South Vietnamese army was the start of a massive buildup of American troop strength which reached a high of 543,482 in 1969. In the early years in Vietnam the Pentagon was still using a set-piece, WWII battle mentality, and Communism was our new political devil. And this was a hot, sweaty jungle war with no front lines.

Very few Americans spoke or understood the sing-songy monosyllabic Vietnamese language. The history and dynamics of a very old country that had been at war in some form or another for more than a thousand years was lost on those tasked with guiding America’s efforts there.

The fiercest battles were being secretly waged between the Joint Chiefs of Staff and the Department of State. The State Department’s political and diplomatic findings were muzzled and marginalized. We bombed Hanoi while increasing numbers of young draftees and regular American troops were being slaughtered as they fought fiercely in unforgiving conditions for a cause they did not understand. Almost twice as many Vietnamese, insurgents as well as civilians, died from our bombs and bullets.

America’s strong belief in the efficacy of power reasoned that if bombing our way to peace was not working, there was no need to consider diplomacy or a new approach. Clearly we only needed to drop more bombs, send in more troops and the enemy would finally give up. And that is just what we did. The generals called for increasing the enemy body count to achieve peace and allow us to return home with honor. And our politicians went right along with that reasoning.

We failed to appreciate that we were in the middle of a very old private fight between North and South. Intelligence showed early on that a majority in the South was ready for peace, even a communist style of peace, and most of all wanted the “long noses” who they saw as raining destruction down upon them to be driven out of their country. In Vietnam there ultimately was no victory and no honor for America. Today Vietnam is peaceful and prosperous and an important trading partner with the USA, just like our top trading partner, communist China.

The military might mentality was challenged early on by president John F. Kennedy, who in 1961 bucked extreme pressure from the Pentagon and within his own White House, and refused to order combat troops into Vietnam, limiting our presence there to military advisers. JFK listened not only to his top military brass, but also to his State Department, particularly undersecretary George Ball who predicted pretty much what eventually happened, except reality was worse than what he envisioned. After JFK’s death his order halting combat troops was reversed by President Johnson, driven more by domestic politics than military necessity.

In Vietnam 58,000 American troops were killed, 155,192 were wounded or missing. The touted “domino effect” where all Southeast Asia would topple country after country to communism if we didn’t win in Vietnam now is easy to see as so much expedient political hysteria.

The story is, of course, much more complex than this, but the bare bones are that politicians and military leaders refused to listen to the State Department and other foreign service experts who laid bare the corrupt leadership of South Vietnam, and pointed out that this was a long simmering internal war of insurgency with strong nationalistic roots. The actual communist Chinese or Soviet Russian interest in and backing of the war was extremely limited.

Our desire to strike back after the attack on the World Trade Center and Pentagon on September 11, 2001, combined the totally inept leadership of the George W. Bush administration with, once again, expedient political hysteria. First we launched an inadequately planned and then insufficiently supported attack upon al Qaeda strongholds in Afghanistan. Osama bin Laden and his al Qaeda top officials escaped to protective sheltering by tribal supporters who had seen their country invaded by the British, the Soviet union, and now American and NATO troops.

Then, with political misinformation, outright lies, a cowed press and a Congress that asked few questions, our government launched an unprovoked invasion of Iraq, which had nothing whatsoever to do with the 9-11 attacks on the USA. This mad neo-conservative misadventure has had a massively destabilizing effect upon the Middle East and has bred more hatred for the USA and our military in the Arab world.

It has also unnecessarily stressed our military’s ready troop strength and equipment readiness with 4,300 U.S. troops killed and more than 30,000 wounded and injured as of September 2009. Cost of the Iraq war is expected to surpass the $686 billion present day dollar value cost of the Vietnam war by year’s end.

One of President Obama’s first actions after taking office was to make good on his promise to get us out of Iraq, and that is now underway. Though the dynamics, politics, religion and leadership are totally different from Vietnam, Iraq, like Vietnam, will ultimately reach its own destiny without the forceful imposition of American ideas and politics upon its ancient culture. We eliminated its despotic leader, but its people still must sort through complex religious and ideological differences on its own and they may or may not decide to remain some sort of democracy.

Afghanistan is an even older and thornier problem. And one that cannot be bombed into submission. Afghanistan was first invaded by Alexander the Great in 330 BC. The tribal warlords have never been successfully subdued. No “surge” of military troops will somehow completely overpower the zealotry of religious belief. Imagine foreign troops invading America trying to subdue and forcibly control ultra-orthodox elements of the Southern Baptist Convention or the Catholic Church, because they saw them as bad for the American people.

Afghanistan has never had organized, cohesive governance and is today just a fragile step away from becoming a failed state like Somalia. That is why it was an ideal location for Bin Laden to train his al Qaeda fighters. The American figurehead Afghan President, Hamid Karzai, has become a real problem for the U.S. as well as NATO. We had hoped, with our backing, he could somehow unify the disparate tribes flung through the mountains and badlands into a proud democracy.

But such dreams have been jarred by the reality of a Karzai-rigged national election with rampant vote tampering and voter intimidation. Karzai is no better than the warlords we want him to pull together. Karzai has now distanced himself from his American minders and has lost legitimacy in the eyes of the Afghan people.

Now we want to send in a massive number of new troops and equipment to somehow again “win hearts and minds” and drive out the Taliban with brute force.

While the Taliban have no designs upon terror against America or any of the other NATO nations now with troops in the country, they operate as brutal criminals in Afghanistan and neighboring Pakistan. An increased armed American presence there is a daily irritant to Afghans, as well as neighboring rogue areas of Pakistan caught between foreign troops who often cannot tell the difference between peaceful civilians and the Taliban.

Once more we are fighting a war where troops do not speak the language or understand the people and are tasked with fighting often in 130º heat. The goal of preventing Afghanistan from again becoming an al Qaeda terrorist training ground cannot be accomplished by bombing the country into submission. This is a complicated political, diplomatic and sociological challenge.

President Obama, in office less than a year, just like JFK, must soon make a decision regarding the politically charged prospect of approving or disapproving more troops being called for by a top military general. I hope he is aware of the assessment of others who have tried to subdue this ragged country:

“Afghanistan taught us an invaluable lesson . . . It has been and always will be impossible to solve political problems using force. We should have helped the people of Afghanistan in improving their life, but it was a gross mistake to send troops into the country.”