Too much naked truth for Mississippi prison workers when they get zapped by body scanners. 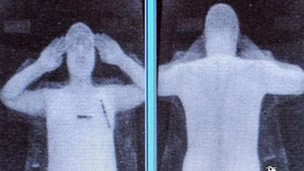 Here’s looking at you, kid! Graphic by Larry Ray / The Rag Blog.

There ought to be a law! And there might be one shortly to protect Mississippi prison workers from anyone sneaking a peek at their private parts.

Some Mississippi prison guards and other civilian prison workers are now required to stand in front of surplus TSA airport X-ray body scanners installed in the prison as they report for work. It is apparently part of their daily work check-in routine to be scanned for hidden contraband, and this has upset State Rep. Dennis DeBar of Leakesville. Not the contraband checks, but the X-ray machine that can see through workers’ clothes!

Rep. DeBar said some prison workers “are worried that a co-worker could see naked images of their bodies.”

Rep. DeBar told The Mississippi Press that he has proposed House Bill 926 because he, “has constituents who work at South Mississippi Correctional Institution, and some believe the scanners invade their privacy.” He said many of them “are worried that a co-worker could see naked images of their bodies.”

Speaking at the State Capitol, Rep. DeBar said, of his constituents: “We have a lot of religious people — Pentecostals and Baptists — who object to that.”

Some 250 TSA radiation-emitting backscatter (X-ray) airport scanners were finally dumped last summer and warehoused. The scanners’ flawed Rapiscan software never could be made to satisfactorily blur pubic or breast areas or much of the rest of the image for that matter. So to quieten the clamor from privacy advocates, they removed them from airports.

They were ultimately warehoused, then donated to state governments, and the Mississippi surplus property division is where the Department of Corrections latched on to 17 of them to “look for contraband.”

In classic Mississippi logic, House Bill 926 proposes “that the scanners be used only if there’s reason to suspect an employee is carrying contraband.” Well, if there is reason to suspect an employee is sneaking in dope or whatever, it isn’t like prison security folks don’t know how to do a full body cavity strip search. No need to fire up the old airport X-ray scanner.

Just have the suspected employee step into the office, strip, and bend over. But that nuanced logic may be too much to deal with. Maybe civil enough for prisoners but not for Civil Service employees?

The prison folks who grabbed up the X-ray scanners after the TSA dumped them also got the problematic and flawed Rapiscan imaging software that came with them which still bares all of the body, in 50 shades of gray. Well, maybe not 50, but detailed enough for a potential prurient peek.

However, Rep. DeBar’s Pentecostal and Baptist prison guards aren’t just left unprotected from surreptitious stealthy spying at their bare imaged bodies, real or imagined. The damaging personal invasion comes from from that scanner’s regular daily dose of X-ray ionizing radiation, a form of energy that can cause cancer.

The TSA and its big buck scanner suppliers all swear that the “amount of radiation is minimal.”

The TSA and its big buck scanner suppliers all swear that the “amount of radiation is minimal.” I have always wondered if that was true why do all European countries ban use of the ionizing radiation X-ray scanners?

Certainly, the occasional chest X-ray or scanner zap of an airline passenger should have a much lower cumulative effect on the body than someone being X-rayed daily. Hospitals and imaging clinics most certainly would forbid such an idea. Technicians and medical staff who monitor CAT scans and even chest X-rays do so from behind lead shields. And TSA workers located near the scanners also are provided shielding.

I would hope when the Mississippi Department of Corrections got their zillion dollar high-power airport passenger scanners for a few bucks they also got the operational manuals with the bright yellow pages that warn about the dangers of radiation exposure.

Cartoon images may be more appropriate to the needs of Mississippi. DeBar’s bill passed the House Corrections Committee yesterday and now will move to the full House for more debate.