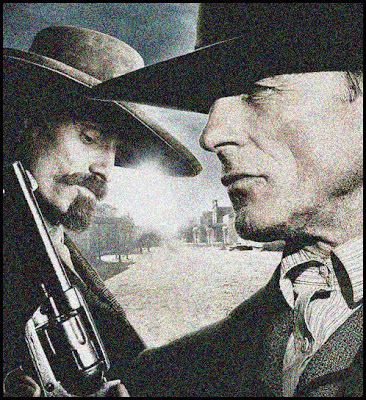 Our OK Corral: Shootin’ irons for all?
OK Corral in California?
Politicians packing heat, oh my…

Got an email this evening from a old friend who keeps a pretty good daily watch on the news, especially the really bizarre and extreme news stories about America in 2011. The article he forwarded had this headline:

The whole idea of elected representatives and lawmakers who want to make a law to let them pack a gun because they felt threatened by negative e-mail and mean phone calls triggered a top of the head response to my friend, Harry, who sent me the news article.

Here’s my reaction to these Left Coast pol’s whose proposed legislation would help fulfill the NRA’s desire to have everybody packing heat.

Harry, old friend, it occurs that by arming every person capable of loading a gun and letting them carry it in their belts, holsters, or wherever, we actually would create a non-nuclear version of MAD, Mutually Assured Destruction… sort of. It would be more mutual for some folks than others.

Problem is, that a couple of hours on a shooting range and a pat on the back is not going to really make a scared politician packing heat any safer from an enraged, focused person intent upon blowing him away.

Harper’s Magazine had a cover article last year on how this all really shakes out when someone decides to have a gun on him, or her, at all times. One’s thinking changes completely and the really remote chance that someone is going to do you harm becomes an obsession.

So, a simple advance, for a completely innocent reason, by someone into this legally ready-to-shoot-gun-toting person’s “territorial imperative” space around him could result in murderous gunfire.

Like the guy wearing a hood, or the turban-wearing tourist, or whoever you do not recognize and feel threatened by. Some poor soul fumbling for a paper with address on it in his pocket who was just trying to ask you where the city museum is located.

The whole mindset that life is like a cowboy movie reduces humanity and common sense to a perceived primal battle where everyone goes around with a semi-automatic bludgeon at the ready. Kill or be killed.

Had the federal judge in Arizona, Congresswoman Giffords, and her aides all been armed, what would have been the purpose of having a sincere meeting with constituents in a supermarket parking lot?

The nutcase young shooter would have still had the drop on all of them because he did not come there to talk about good government with Ms. Giffords. He came there to shoot her in the head, and all the folks around her for good measure.

Maybe someone in the crowd armed with their concealed weapon would have shot back at him, and maybe that scared shitless shooter blasting away wildly at the nutcase shooter would have killed lots of other folks as well.

What the hell happened to the American dream, Harry, and folks getting together to take part in it? Do we all want to be potential killers if we think someone is lurking out there with a shootin’ iron to kill us? Are we all walking out of that 1950’s Saturday double feature Western where the white hats always shoot and kill the black hats… has that become a movie in an endless loop in our scared collective psyche?

Ain’t like the craziness of the early 60’s at UT in Austin is it, Harry? What is really scary is that voters actually elected these whacko folks to represent them… and this is out in California, not Texas where the Governor packs a gun and shoots coyotes that get too close!

This entry was posted in Rag Bloggers and tagged California, Guns, Larry Ray. Bookmark the permalink.