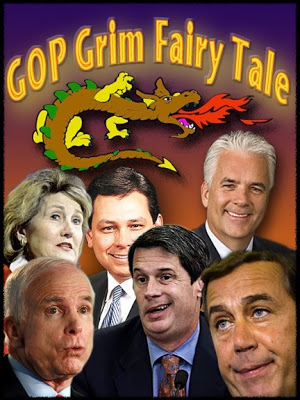 Instead of thinking about America first and a looming, worsening recession, these Righteous Right-wingers are thinking mostly of themselves and their political futures.

On November 4th, 2008 Americans overwhelmingly said ENOUGH! Voters said they had had enough of penny-pinching, closed-minded conservatives trashing our economy and our worldwide reputation. Yet those very conservative paragons of parsimony still haven’t gotten the message: “No one wants to hear from you any more.”

The Republicans have been working overtime telling GOP Grim Fairy Tales about “their plan” to fix America’s problems. Problems their leadership actually caused. The “liberal media” they have loudly denounced for decades has opened the airwaves to feature the worst and loudest of the nay-saying tale tellers, day after day. Boehner’s braying, Vitter’s vitriol, Hutchinson’s hollering, Ensign’s exaggerations, and McCain’s moaning has created a dismal daily din.

The three Republican Senators who did vote to approve a desperately needed stimulus bill have been hailed as heroes for joining the Democrats and low-life kamikaze rejects by their GOP chamber-mates.

Instead of thinking about America first and a looming, worsening recession, these Righteous Right-wingers are thinking mostly of themselves and their political futures. They know that their “base” back home, as ultraconservative and ultra-narrow as they are, will not hesitate to poison the next primary when they come up for reelection. The rabid folks back home will pick a new, even more strident wing-nut candidate to run against them if they don’t toe the line and oppose anything that doesn’t start with the words tax-cut, tax-credit or tax-rebate.

“The House Republican Economic Recovery Plan,” posted on the web by the GOP, lists five steps they claim will actually move us up out of their mess without spending any money at all. It seems clear why serious recovery plan economic experts didn’t show any interest in hearing all this again:

Nobel laureates, respected economists and lions of the financial world have characterized the present economic crisis as potentially as bad as the crash of 1929. All are clear that only massive quick infusions of cash from the U.S. Government can initiate a turn-around in the dangerous cycle of joblessness, tight credit, business failures and increasing human suffering across America. The private sector alone cannot pull it off without help, and repeating past mistakes like those made in Japan in the 1990’s clearly will not work either.

Republicans will continue shouting loudly that the experts are wrong, and that repeating Bush’s failed triple try at tax cuts will still, somehow, do the trick. They have to keep up the noise for the base back home. Pitifully, the rest of the Americans outside their home districts are of little concern to them because they will not be voting in their forthcoming primaries. And these bozos wear American flag pins in their lapels.

3 Responses to Larry Ray : Rebublican Obstructionists Still Don’t Get It