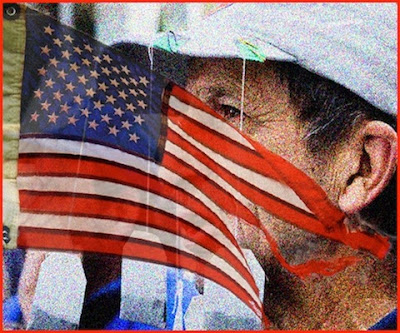 Graphic by Larry Ray / The Rag Blog.
A virus has been unleashed:
Tattered leadership and toxic tea

The voter virus was created by pseudo patriotism and the excesses of a previous decade of lax government whose singular priority was to reward the already wealthy.

Sober regulation of our banking and real estate industries was blithely and irresponsibly sidestepped for more than a decade. Then in late 2008 Wall Street’s wild, reckless ride came to a crashing halt. Finally the virus was loosed, infecting the American economy and reducing it to a rattling house of tumbling cards, all jokers.

Since 2009, more time has been spent by our elected leaders in assigning political blame than in launching a vigorous joint effort to cure and strengthen our economically bedridden nation. Confused Americans have not questioned flawed and false narratives from a brash, opportunistic, and well funded conservative chorus.

Repeated GOP mantras shamelessly blame the new black Democratic president for the entire mess, for all the nation’s out of control spending. But these duplicitous accusers never acknowledge the inherited debt racked up and left by their party.

This absurdity was parlayed into political propaganda gold by tax free groups, notably the “American Legislative Exchange Council” formed in 1973 by conservative activists. Finally, their time had come after the bruising they took in the 2008 Democratic election sweep. Millions of dollars from the ultraconservative billionaire Koch brothers slid into these “councils” as fast as they could qualify for nonprofit status.

The word “debt” is understood by everyone, and when the GOP heralded “an out of control national debt that must be stopped at all costs,” the warning was accepted as readily as an FDA ordered ground turkey alert after a multi-state Salmonella outbreak.

Raising the U.S. debt ceiling, was routinely done eight times under the Bush administration and countless other times all the way back to 1917 with no serious opposition whatsoever. But now “debt ceiling” was suddenly spotlighted and used as the hostage in a mad extortion plot.

The new conservative clog, after first finding their offices, quickly found the C-Span TV cameras and began immediately to promise their admiring ideologues back home that they would let America go into default unless a sweeping but ill-defined debt reduction bill was passed and signed by the president.

Most of these freshmen had no idea of how or why the debt ceiling has operated since 1917 or what the ruinous consequences of default would be. And they wore their ignorance as a badge of courage.

But back in November, 2010, Senate Minority Leader Mitch McConnell made the GOP goals and strategy crystal clear, setting the stage for the debt ceiling drama to come some seven months later. McConnell loftily proclaimed on national TV that if President Barack Obama wouldn’t go along with his key GOP goals, “the only way to do all these things is to put someone in the White House who won’t veto any of these things.”

After 27 years in the isolated, nurturing environment of the U.S. Senate, McConnell, who is worth an estimated $35 million dollars, has become the dour poster boy for America’s out of touch professional politicians. There are no poor people in elected office up in Washington.

Blinded by wealth and power, McConnell angrily told the nation that his forces would make the president bend to their will or they would have him removed… chilling echos from the 15th Century and the pronouncements from the House of Medici. And from that point forward with a new House majority all GOP votes were NO, hobbling the president and actively designed to make his life as difficult as possible.

Now, like the ending to a cookie-cutter Hollywood movie, Speaker John Boehner finally unclogged the congressional sewer main, and repacked the House sausage machine producing a 269-161 vote approving a budget agreement, thus certainly ending the threat of a U.S. Treasury debt default, and setting the stage for a heroic rally on the U.S. and foreign stock markets.

Boehner sent the winning sausage recipe on to the Senate where it was approved and sent to President Obama for signature, leaving a full twelve hours before the Treasury Department would have gone into default for the first time in the nation’s history.

Both chambers on The Hill think they have swallowed bitter pills but it wasn’t strong enough medicine to wipe out the voter virus. As America’s woes worsen, the voter virus will thrive on increasing universal voter disgust with the endlessly sorry and unacceptable performance of their House and Senate leaders.

The voter virus is predicted to attack the CDC (Completely Dysfunctional Congress) and erupt into a nationwide epidemic on November 6th, 2012. Mark your calenders.