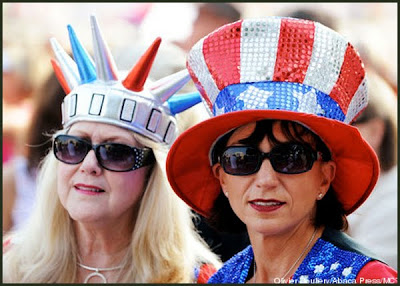 I talk with friends in Italy almost daily and this past year it has been challenging to try to answer their questions about political images beamed to them from America. They are mystified by the clots of angry, mostly white and mostly “mature” Americans who wear strange clown-like hats sometimes with “tanti bustini di tè” (lots of teabags) dangling from them.

Friends in Naples ask, “Who are these people and why do they dress up like that? Is it some sort of folk tradition? Do they still not like dark-skinned people? Why are they so angry?” All are valid questions, especially with the steady stream of news, photos and video being fed constantly to Italy. The loud and bizarre gets lots of play there just like it does here.

Protests have their extremes in Europe, to be sure. French farmers dumped tons of manure in front of McDonald’s outlets protesting U.S. sanctions. And in Brussels it was not blood running in the streets last year, it was milk. Part of a continuing Pan-European farm fury included the scene below, protesting government controlled milk prices. Frustrated farmers presented a clear message that was milked for all it was worth with not one funny hat, misspelled poster, or misplaced metaphor.

So, how to explain why those frustrated, not too well informed, and very noisy Americans gather to “take their country back” while all decked out in giant Red White and Blue top hats and other strange attire? I was recently asked by my friend, Guido, “Larry, why is the woman with the yellow flag with the coiled snake on it telling everyone not to step on the snake? Is she a snake worshiper?”

For years Italians have seen documentaries about Christian sects in rural America who dance wildly inside their churches while holding and even kissing live poisonous snakes. So, coiled rattlesnakes on flags at heated political gatherings suggest to Italians a reasonable association with the American snake handlers they have seen. But snakes as a national symbol of American patriotism is neither quickly nor easily explained.

You can imagine the challenge in trying to talk about the why and who and what of raucous Tea Party gatherings. I have been unable to connect Boston revolutionaries’ dumping of crates of tea into their harbor over unfair taxation with today’s small tea bags hanging off gaudy sequined hats. Not for my Italian friends or for myself.

The simplistic appeal of Glenn Beck’s dreck, to the people in funny hats is particularly difficult for my friends to understand. Italians who have seen him think Beck is a game show host. I just agreed with them and continued on telling about the Great American Snake.

Explaining the yellow “Gadsden flag” to my Italian friends involved starting with a satirical article written by Ben Franklin in 1751 which included a cartoon showing a timber rattlesnake chopped up into eight pieces. Each piece represented one of the eight colonies. Franklin, tongue in cheek, suggested that since the British had sent convicted criminals to America, we should send rattlesnakes to England by way of thanks.

Four years later Continental Congress Colonel Christopher Gadsden reportedly used the image of a coiled rattlesnake that had been painted on marching band snare drums of U.S. Marines interdicting British naval supply ships arriving in the new colonies to create his “Don’t Tread On Me” flag.

Col. Gadsden presented the first feisty banner to his home constituency in South Carolina. It became one of several early American flags. The flag’s image is still all over the place today, even on Nike’s 2010 World Cup soccer ball images, at Boy Scouts of America camp sites, and as the Tea Party’s official flag.

So somehow it makes perfect sense to lots of the disgruntled and fearful here at home to see a 62 year old American woman in an out sized floppy Uncle Sam hat waving the rattlesnake flag warning you not to step on her patriotism… however she may define that. Why she can’t be just as patriotic in regular street clothes puzzles a large majority of Americans as well as my Italian friends.

I will hazard a guess that she and most of the other snake flag wavers have no more idea of the flag’s history than Guido. But to her she is a tightly coiled patriot fighting fascism, communism, socialism, and all the other isms that the new black American president and rabid liberals have in store for her. No real need to define or understand all those isms because “everyone knows what they are.” 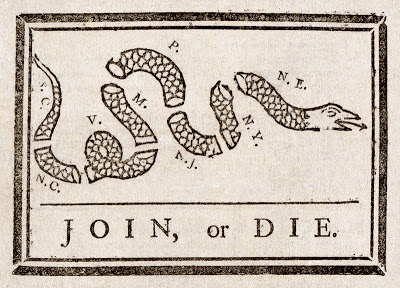 Benjamin Franklin’s woodcut cartoon from May 9, 1754. Image from Library of Congress / Wikimedia Commons.
Guido, on the other hand, can give you a clear, quick definition of Fascism and communism. His parents lived under Mussolini’s Fascist rule. Italy has a Communist party which is represented in its endless postwar coalition governments, and Italy is by and large a social democracy just like a most of Europe today.

Guido asks, still trying to understand the ladies pictured at the top of the page, “That lady in the hat with the colored horns on it, is that for good luck?” In Italy, an animal horn amulet made of real gold or even red plastic wards off evil. I deftly try to say that she is wearing a standard issue Statue of Liberty party hat that has nothing to do with the evil eye or with France who gave the statue to the USA. “So the USA never sent rattlesnakes to France?” I allowed as how I just wasn’t sure about that.

Sarah Palin is easier for Italians to understand since they have had their own national nutcase, Prime Minister Silvio Berlusconi, who dominates the news with his benighted bumbling and endless internationally embarrassing pronouncements.

Berlusconi is a billionaire media mogul. Sarah Louise is hard at work Twittering her way to becoming a multi-millionaire from speaking fees for her illogical, vacuous God and Country utterances. Sarah Louise has a nice figure, nice looks, and great legs, and if she married Berlusconi it would be a marriage made in heaven. And Sarah speaks in tongues. But I digress.

Trying to sum up the discontent, anger, and bizarre headgear issues, I offered a list of suggested questions Guido could toss around with his friends over a cup of tea before we have our next political chit chat. The ladies at the top of the page might take a glance at these as well.

What happens when big government gets out of your life, starts spending less, and each individual American State bears the responsibility for its citizens’ welfare?

Will all the Tea Party folks turn in their Federally subsidized socialized Medicare cards and expect the state and their own private insurance to take care of their health?

When the already collapsing bridges, dams, highways, and other infrastructure finally totally crumbles away while no one has been paying any higher taxes, will the states somehow take care of all those problems within their boundaries? You think Wall Street and your local banker might step in and help you while staying out of your life as well?

And when “the government” has been purged from your lives and “returned to The People” — except for “when Federal Government assistance is needed” — what will the rules be that define when and how much assistance?

Finally, who will make those rules? Mad folks in funny hats who created their own brand of social democracy state bystate?

I look forward to my next chat with Guido. He wants to talk about this great nation of America and how it is made up of immigrants. His great uncle Tonino lived in Brooklyn.