Latest About Obama From Toby Keith, New Darling of the Right 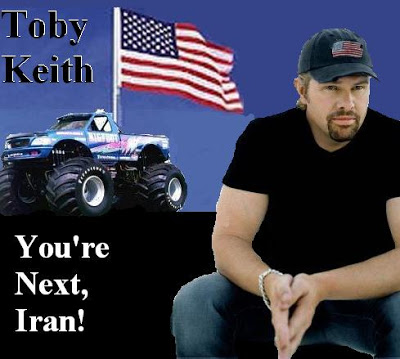 Keith: Obama ‘Talks, Acts, And Carries Himself As A Caucasian’
By Max Blumenthal / August 5, 2008

Last week, I reported for the Huffington Post that country singer Toby Keith had performed a pro-lynching anthem on the Colbert Report, and would be playing the same song soon on the Tonight Show with Jay Leno and a slew of nationally televised talk shows.

The lyrics of Keith’s song, “Beer For My Horses,” which I transcribed, could hardly be less explicit — “Hang ’em high, for all the people to see.” In my piece, I also noted the racially tinged nature of the song’s video and the forthcoming movie that Keith’s song inspired.

The response from right-wing blogs was swift and strident. Townhall.com whined that “The Liberal Lynching of Toby Keith” had taken place; Lonewacko claimed that Keith was actually “promoting lawful executions.” And Keith found an avid defender in Robert Stacy McCain, the disgraced former Washington Times reporter and avowed neo-Confederate who once allegedly ranted in the middle of the Times newsroom that slavery was “good for the blacks and good for property owners.”

The comments section of my post was immediately swarmed by right-wing trolls twisting themselves into contortions to defend the indefensible. A typical comment read: “I can’t believe that this Max can’t find something real to complain about in this crazy world… I think Max is the bigot — he obviously hates country music, country singers and Southerners.”

Describing Keith’s over-produced truck commercial schmaltz as “country music” besmirches the dignified tradition established by Bill Monroe, Johnny Cash and Dolly Parton, while insulting the innovative artists propelling the genre into the future, from Neko Case to Son Volt to my good friend Dave Bryan (hear his music here). At his best, Keith is Merle Haggard with a lobotomy. But that’s beside the point.

The comments by the literally hundreds of trolls who leapt to Keith’s defense are significant for only one reason: they reveal the extent to which the radical right has anointed Keith as a icon of its movement. Keith’s schlock rock is the soundtrack of the culturally deprived australopithicenes who populate the cyber-caves of freeperland and comprise the movement’s most fervent activists. As a bellicose chickenhawk who has risen from the ranks of the rural working class to become “White Trash With Money,” Keith has carefully calibrated his image to fit the sensibility of his fans.

Now, Keith has trained his sights on Barack Obama, attacking him in language that startled even the notoriously reactionary radio jock Glenn Beck. During Keith’s appearance on the July 30 broadcast of Beck’s show, he remarked, “I think the black people would say he [Obama] don’t talk, act or carry himself as a black person.”

“What does that even mean?” the audibly shocked Beck replied.

“Well, I don’t know what that means,” Keith drawled, “but I think that that’s what they would say. Even though the black society would pull for him I still think that they think in the back of their mind that the only reason he is in [the general election] is because he talks, acts and carries himself as a Caucasian.”

How will Keith’s fans explain away his remarks without rejecting the essential thrust of his argument? The comments section is open.

Toby Keith’s latest: Obama “talks, acts, and carries himself as a Caucasian.”

One Response to Latest About Obama From Toby Keith, New Darling of the Right