Latest on the McCain Hoax : Campaign Role in Sensationalized News 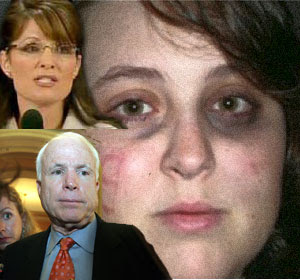 See ‘Rick Sanchez Calls Out Media That Fell For “Mutilation” Hoax’ by Sam Stein — and two Videos — below.

John McCain’s Pennsylvania communications director told reporters in the state an incendiary version of the hoax story about the attack on a McCain volunteer well before the facts of the case were known or established — and even told reporters outright that the “B” carved into the victim’s cheek stood for “Barack,” according to multiple sources familiar with the discussions.

John Verrilli, the news director for KDKA in Pittsburgh, told TPM Election Central that McCain’s Pennsylvania campaign communications director gave one of his reporters a detailed version of the attack that included a claim that the alleged attacker said, “You’re with the McCain campaign? I’m going to teach you a lesson.”

Verrilli also told TPM that the McCain spokesperson had claimed that the “B” stood for Barack. According to Verrilli, the spokesperson also told KDKA that Sarah Palin had called the victim of the alleged attack, who has since admitted the story was a hoax.

The KDKA reporter had called McCain’s campaign office for details after seeing the story — sans details — teased on Drudge.

The McCain spokesperson’s claims — which came in the midst of extraordinary and heated conversations late yesterday between the McCain campaign, local TV stations, and the Obama camp, as the early version of the story rocketed around the political world — is significant because it reveals a McCain official pushing a version of the story that was far more explosive than the available or confirmed facts permitted at the time.

The claims to KDKA from the McCain campaign were included in an early story that ran late yesterday on KDKA’s Web site. The paragraphs containing these assertions were quickly removed from the story after the Obama campaign privately complained that KDKA was letting the McCain campaign spin a racially-charged version of the story before the facts had been established, according to two sources familiar with the discussions.

The story with the removed grafs is still right here. We preserved the three missing grafs from yesterday:

A source familiar with what happened yesterday confirmed that the unnamed spokesperson was communications director Peter Feldman. Feldman was also quoted yesterday making virtually identical assertions on the Web site of another local TV station, WPXI. But those quotes, which we also preserved here, are also no longer available on WPXI’s site, for reasons that are unclear.

This is problematic because the McCain campaign doesn’t want to have been perceived as pushing an incendiary story that not only turned out to be a hoax but which police officials said today risked blowing up into a “national incident” and has local police preparing to file charges against the hoaxster.

There’s no evidence that anyone from McCain national headquarters put out a version of events like this.

After the story appeared on KDKA’s site and this and other pieces in the local press started flying around the political world, an Obama spokesperson in the state angrily insisted to KDKA that it was irresponsible for the station to air the McCain spokesperson’s incendiary version of events before the facts were fully known, according to two sources familiar with the discussions.

After that, KDKA went back to McCain’s Pennsylvania spokesperson, Feldman, and asked if he stood by the story as he’d earlier told it, but he started backing off the story, a source familiar with the talks says. That prompted KDKA to remove the grafs.

Feldman couldn’t immediately be reached, and a McCain HQ spokesperson declined to comment.

The big political story of the day revolves around what turned out to be a non-story. Several media outlets (the vast majority conservative) were left with egg on their faces after they trumpeted up the tale of a McCain volunteer who claimed to have been assaulted by a large black man because of a McCain bumper sticker on her car. On her face was carved a backwards ‘B’ (meant to represent Obama’s name). The Drudge Report called it “mutilation.”

It was a hoax. And now, some in the fourth estate are left to explain why they pushed this apparent political ploy. Those in the business who showed some prudence are calling out their competitors for taking the bait.

On CNN today, anchor Rick Sanchez did just that, naming the outlets that not only reported but actively pushed the story of Ashley Todd. In addition to explaining why his station didn’t report the story, Sanchez dug the knife in a bit deeper when it came to Hugh Hewitt, the conservative radio talk show host who appeared on CNN Thursday and blamed “that side” (i.e. the Democrats) for engaging in “extraordinarily” disturbing acts.

“Part of the story is the fact that it was reported by the media,” said Sanchez. “We would not be telling the story now had it not been carried by so many outlets. As I mentioned before, it was mentioned on, as a matter of fact I have a list and not to mention names, but the initials of the news organizations are Fox News, the Pittsburgh Post-Gazette and Newsday. And also radio talk show hosts went on their radio stations and talked ad infinitum about the story yesterday, one of them even seemingly being a braggadocio about it when he was on the air with our own Wolf Blitzer yesterday.”

Separately, the College Republicans — a group of which Todd is a member — sought to distance themselves from the whole affair, telling the Huffington Post: “When Ms. Todd initially contacted us claiming to have been attacked, our first reaction was obviously to be concerned for her safety … We are as upset as anyone to learn of her deceit. Ashley must take full responsibility for her actions.”

2 Responses to Latest on the McCain Hoax : Campaign Role in Sensationalized News