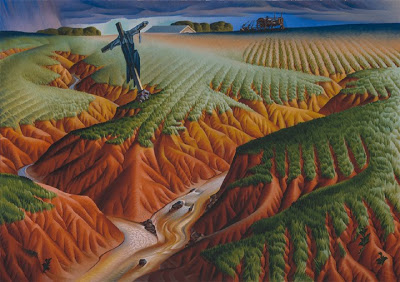 “The Crucified Land,” 1939, oil on canvas by Alexandre Hogue.
Our devastated common dwelling:
Easter for the crucified Earth

Easter is a celebration shared by Jews and Christians, and is a metaphor for the present situation of the Earth, our devastated common dwelling.

Etymologically, Easter means passage from slavery to freedom and from death to life. The Planet, as a whole, is passing though a severe Easter. We are within an accelerated process of loss: of air, of soil, of water, of forests, of ice, of oceans, of biodiversity, and of sustainability of the very Earth-system. Terrified, we witnessed the Earthquakes of Haiti and Chile, followed by tsunamis.

How does all of this relate to the Earth? When will the losses end, or where will they lead us? Dare we hope, as in Easter, that after Good Friday of the passion and death, new life and resurrection will always burst forth?

We need a retrospective look at the history of the Earth to shed some light on the present crisis. In the first place, we must recognize that earthquakes and disasters are recurrent in the geologic history of the Planet. There is a basic rate of extinction that is part of the normal process of evolution. Species exist for millions and millions of years, and, then they disappear. Like an individual who is born, lives for a certain time, and dies. Extinction is the destiny of individuals and species, including ours.

But beyond this natural process, mass extinctions exist. The Earth, according to geologists, may have experienced 15 such great extinctions. Two were particularly grave. The first, 245 million years ago, with the rupture of Pangea, that single land mass that broke apart, giving birth to the present continents.

That event was so devastating that it decimated between 75% and 95% of all the living species then in existence. Beneath the continents, the tectonic plates continue to be active, colliding with each other, overriding or drifting apart, in a movement called continental drift, which causes the earthquakes.

The second occurred 65 million years ago, caused by climatic disturbances, rising of the sea levels, and warming — events generated by a 9.6 km asteroid that fell in Central America, causing huge firestorms, tidal waves, poisonous gasses, and a long darkening of the sun. Dinosaurs that had dominated, sovereign, upon the Earth, for 133 million years, totally disappeared, and 50% of other living species as well.

The Earth needed ten million years to completely remake herself. But it allowed for a wide range of biodiversity such as never before in history. Our ancestors who used to live in the treetops, feeding on flowers, shivering with fear of the dinosaurs, could come down to the ground and make their way, culminating in what we are now.

Scientists, like Ward, Ehrlich, Lovelock, Myers, and others, believe that another great extinction is occurring, one that began some 2.5 million years ago when vast glaciers began to cover part of the Planet, altering the climates and the sea levels. That process was greatly accelerated by the appearance of a truly devastating meteor, namely, the human being, through his systematic intervention in the Earth system, particularly in recent centuries. Peter Ward (O fim da evolução, 1977, p. 268), says that this mass extinction is clearly visible in Brazil, where over the last 35 years, four species were definitively extinguished each day. And he ends by warning: “a gigantic ecologic disaster awaits us.”

It is the existence of earthquakes that destroy everything and kill thousands and thousands of people, such as in Haiti and Chile, that creates in us a crisis of meaning. Here we must humbly accept the Earth such as she is, generous mother or cruel stepmother.

She follows the blind mechanisms of her geologic forces and ignores us, which is why the tsunamis and cataclysms are so terrifying. But she passes information to us. Our mission as intelligent beings is to decode that information to avoid damage, or to use it for our own benefit. Animals capture that information, and before a tsunami hits, they fly to the highest places.

Perhaps at one time, long ago, we also knew how to capture that information, and defend ourselves. We have lost that capacity now, but to supplement our deficiency, there is science. Science can decode the information that previously the Earth passed to us, and suggest strategies of self defense and of salvation.

We are the Earth herself, with her consciousness and intelligence, but we are still in the youthful phase with very meager learning. We are entering the adult phase, learning how to better handle the energies of the Earth and of the cosmos. Then, the mechanisms of the Earth, through our knowledge, will stop being destructive. We all must grow, learn and mature.

The Earth hangs from the cross. We must take her from there and resurrect her. Then we will celebrate a true Easter, and we will be able to wish: Happy Easter!

1 Response to Leonardo Boff : Easter for the Crucified Earth