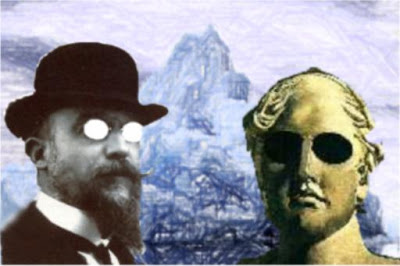 Image from Camelia Elias / FRAG/MENTS.
The World Society of Blindness

These are global problems that transcend our paradigm of specialized knowledge. Life does not fit into a formula, nor caring into a calculus equation.

Poet Affonso Romano de Sant’Anna and Portuguese Nobel Laureate for literature, Jose Saramago, have made “blindness” a theme of their severe criticisms of present day society, which is based on a reductionist vision of reality. They showed that there are many conceited seers who are blind, and a few blind men who are seers.

It is pompously publicized now that we live in the society of knowledge, a sort a new age of light. Effectively, that is the way it is. We know more and more about less and less. Specialization has colonized all areas of knowledge. The knowledge gained each year is greater than all the knowledge accumulated in the last 40 thousand years. If, on the one hand, this brings undeniable benefits, on the other, it makes us infinitely ignorant, putting blinders over our eyes, and thus preventing us from seeing the whole.

What is at stake now is the totality of human destiny and the future of the biosphere. Objectively, we are paving our way to the abyss. Why is this brutal fact not seen by most specialists; neither by the heads of State, nor by the immense means of mass communication that claim to predict possible scenarios for the future? Simply because, for the most part, they are cloistered within their specific knowledge, in which they are very competent, but which, for the same reason, blinds them to the urgent global problems.

Which of the great centers of world analysis of the 1960’s foresaw the climatic changes of the 1990s? Which Nobel laureate in economics foresaw the economic-financial crisis that has devastated the more developed countries in 2008? They were all eminent specialists in their limited fields, but ignorant with respect to the fundamental questions.

In general, we see only that which we understand. Since specialists only understand the small portion that they study, they wind up seeing only that minimum part, remaining blind to the whole. To change this type of Cartesian knowledge we would have to undo consecrated scientific habits and recreate an entire world vision.

That the fields of physics, chemistry, biology, quantum mechanics, and others are independent is an illusion. All areas of knowledge are interdependent, a function of the whole. The science of the Earth system was born of this perception. From it derives the Gaia theory, which is not just a New Age topic, but the result of very detailed scientific observation. It offers a basis for global policies to control the warming of the Earth, which, in order to survive, tends to reduce the biosphere and even the number of living organisms, human beings not excluded.

The COP-15 on climate change in Copenhagen was emblematic. Since in our culture the majority is held hostage to its habit of the atomization of knowledge, what dominated the speeches of the heads of state were limited interests: levels of carbon, degrees or warming, investment quotas and other partial data. The central question was different: what destiny do we want for the totality that is our Common House? What can we collectively do to guarantee the necessary conditions, such that Gaia may continue being inhabitable for us and all other living beings?

To grasp that whole, we need systemic learning, together with cordial and compassionate reason, because it is this type of reasoning that moves us to action.

We urgently need to develop the capacity for integrating, for interacting, the capacity of re-linking, of re-thinking, to re-do that which has been undone; and the capacity to innovate. This challenge is addressed to all specialists, so that they may be convinced that a part without the whole is not a part.

By integrating all these pieces of knowledge we will redesign the global view of reality, to be understood, loved and cared for. That totality is central to a planetary consciousness: yes, this one, the era of a guiding light that will free us from the blindness that afflicts us.