Leonardo Boff : Will It All End in Greece Where it Began? 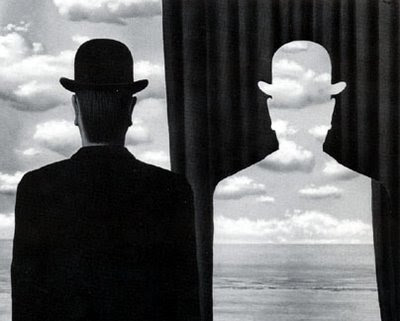 Dualism via Magritte. Image from Natalie Sanders.
It all began in Greece.
Will it all end in Greece?

Our Western civilization, now globalized, has its historic origins in ancient Greece, during the VI Century, before the current era.

The world of myth and religion, which was then the organizing principle of society, collapsed. To bring order into that critical moment, over a period of about 50 years, one of the greatest intellectual creations of humanity took place. The era of critical reason appeared, expressed through philosophy, democracy, theater, poetry and aesthetics.

Socrates, Plato, Aristotle and the sophists were paradigmatic figures who gave birth to the architecture of knowledge, underlying the paradigm of our civilization; there were Pericles, the governor at the head of the democracy; Phidias, of the elegant aesthetics; the great tragic writers, such as Sophocles, Euripides, and Aeschylus; the Olympic Games, and other cultural manifestations, too numerous to list here.

The new paradigm is characterized by the predominance of a type of reason that omits any awareness of the Whole, any sense of the meaning of the unity of reality, that characterized the so-called pre-Socratic thinkers, founders of the original thinking.

In this moment the famous dualisms were introduced: world/God, man/nature, reason/sensibility, theory/practice. Reason created metaphysics, that in Heidegger’s understanding objectifies everything, and sets itself as the holder of power over that object. The human being no longer felt he was part of nature, but placed himself above her, and subjected nature to his will.

This paradigm reached its highest expression one thousand years later, in the XVI century, with Descartes, Newton, Bacon, and others, founders of the modern paradigm. The dualist and mechanical world view was consecrated by them: nature on one side and the human being on the other, prior to and above nature, as her “teacher and owner” (Descartes), the crown of creation in function of which everything exists.

The ideal of boundless progress was developed, that assumes that progress can continue infinitely into the future. In recent decades, greed to accumulate transformed everything into merchandise, to be negotiated and consumed. We have forgotten that the goods and services of nature are for everyone and cannot be appropriated only by a few.

After four centuries of applying this metaphysics, this way of being and seeing, we see that nature has paid a high price for this model of growth/development. We are now reaching the limits of her possibilities. The scientific-technological civilization has reached a point where it can destroy itself, profoundly degrading nature, eliminating a great part of the life-system and, eventually, eradicating the human species. It could result in an eco-social armagedon.

It all began in Greece thousands of years ago. And now it looks as though it all will end in Greece, one of the first victims of the economic horror, whose bankers, to salvage their profits, have pushed the entire society into desperation. It has reached Ireland, Portugal, and Italy. It could extend to Spain and France, and perhaps to the entire world order.

We are witnessing the agony of a millenarian paradigm that is apparently completing its historic trajectory. It can still be delayed for a few decades, in a moribund state that resists death, but the end is predictable. It cannot reproduce itself with its own resources.

We must find another way of relating to nature, another form of production and consumption. It must develop an awareness of dependency with the community of life and of collective responsibility for our common future. If this change does not begin, we will be sentencing ourselves to extinction. Either we transform ourselves, or we will disappear.

I make my own the words of the economist-thinker Celso Furtado:

If, that is, we change paradigms.

[A Brazilian theologian, philosopher, educator, and author of more than 60 books, Leonardo Boff lives in Jardim Araras, an ecological wilderness area in the municipality of Petrópolis, Rio de Janeiro. Boff is Professor Emeritus of Ethics, Philosophy of Religion, and Ecology at the State University of Rio de Janeiro. A former Franciscan priest with a doctorate from the University of Munich, Boff was an early advocate of liberation theology. In 1991, after a series of clashes with the Vatican, Boff renounced his activities as a priest and “promoted himself to the state of laity.” See more articles by Leonardo Boff on The Rag Blog.]