"Liberty City 7" and the Marginalization of Black Discontent 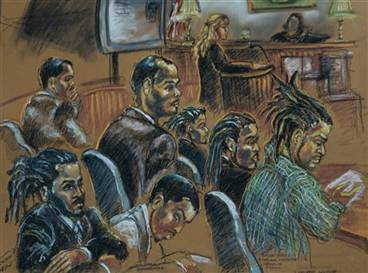 In this courtroom drawing, U.S. Attorney Jacqueline Arango, center, makes her closing arguments before Judge Joan Lenard during the so-called “Liberty City Seven” trial in Miami on Thursday, Dec. 13, 2007
The Vendetta Against Black Men
By Salim Muwakkil / May 13, 2008

Despite the rise of Sen. Barack Obama, black men remain in the bull’s-eye of governmental repression and police brutality.

The government is currently re-trying six black men who have already faced two hung juries in a case accusing them of planning to blow up both the Sears Tower in Chicago and the Miami FBI headquarters.

Known as the “Liberty City 7,” after the low-income Miami neighborhood in which they lived, the seven arrested men could soon become domestic casualties in the war on terror. (In December, the jury acquitted one of the men but then deadlocked on the remaining six. On April 16, a second trial also ended with a hung jury.)

Close observers of the trial argue a case of government entrapment. The two FBI informants — immigrants from Lebanon and Yemen to whom the government paid more than $130,000 for their services — had incentive to exaggerate the scope of the plot. And, it turns out, they were the ones who suggested the targets, purchased the surveillance equipment and supplied the transportation.

More troubling is the larger inference that black radical groups like the Moorish Science Temple, to which the men had a peripheral connection, are somehow in league with Islamic radicals like al Qaeda.

It’s an example of how American law enforcement tends to marginalize black discontent by attributing it to more organized external forces. This is a tendency rooted in U.S. tradition: black radicals and civil rights activists of past eras were often linked to communists and other “outside agitators” — as if the progeny of enslaved Africans needed Karl Marx to detail their gripes about life in America. Now, apparently, the government claims the link is with Osama bin Laden.

Despite no verdict of guilt, the men have been locked up since their 2006 arrest. Incidentally, U.S. Immigration and Customs Enforcement agents took into custody the man acquitted during the first trial and transported him to a detention center in Lumpkin, Ga., a day after the trial ended. Deportation proceedings have since begun against the man, a legal U.S. resident originally from Haiti.

Surely, these six struggling black men — who neighbors contend were simply trying to provide positive role models and improve their crime-ridden community — pose no serious threat to national security. However, by implying the men have mysterious Islamic links and a general hatred for America, the government can justify persecuting them.

And if that’s not enough, consider the case of Sean Bell, an unarmed black man who died in a 50-shot fusillade of police bullets in Queens, N.Y. In November 2006, Bell had a bachelor party at a strip club the day before his wedding and was leaving with two friends when undercover officers confronted and then shot them. The officers mistakenly thought the men were armed and reaching for their guns. Bell’s surviving friends said their attackers never identified themselves as police officers.

The three cops who fired the bullets killing Bell and injuring his friends were acquitted of all charges. The judge ruled, essentially, that the officers’ fear justified firing 50 bullets at the unarmed trio.

The Bell case is just one of dozens — perhaps hundreds — of similar cases of police abuse against young African-American men.

In Chicago, for example, police — reportedly chasing a seat belt scofflaw — broke into a South Side home on April 30 with no warrant and arrested six members of a family, including two juveniles. Witnesses and lawyers for the family members say the police acted abusively. Among those arrested and brutalized was Elijah Henderson, 18, one of two youths wrongfully arrested in the 1998 murder of 11-year-old Ryan Harris.

“I don’t think it’s a coincidence that this young man, who was falsely accused 10 years ago, is now in a lockup, beat up by Chicago police,” says Andre Grant, Henderson’s attorney.

Obama spoke briefly about the Bell case, urging aggrieved New Yorkers to express support for the judge’s not-guilty ruling. But he has said nothing publicly about the Liberty City 7 verdict and re-retrial or the problems of police brutality in his home city.

By downplaying these racial grievances, Obama is doing his part in the implicit deal he made with the American public to avoid any suspicion of playing the race card.

The Rev. Jeremiah Wright disrupted that deal, so he had to go. Question is: What else will go with him?

Salim Muwakkil is a senior editor of In These Times, where he has worked since 1983, and an op-ed columnist for the Chicago Tribune. He is currently a Crime and Communities Media Fellow of the Open Society Institute, examining the impact of ex-inmates and gang leaders in leadership positions in the black community.