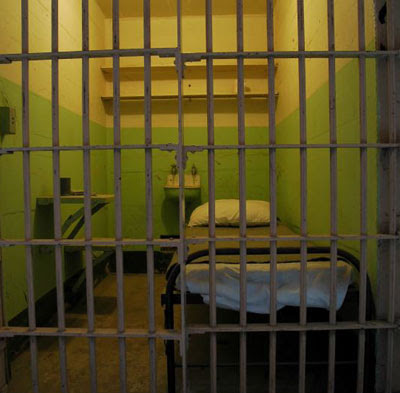 The Radicalization Of An American Prisoner
By George Peter Jr. / December 5, 2008

During a hearing before the Senate Intelligence Committee in 2006, high- ranking F.B.I. officials testified that the Bureau considered U.S. prisons to be “fertile grounds for extremists”, and that they were in the process of developing “threat assessments” for those individuals who may have become “radicalized” during their incarceration.

Listening to those officials postulate a variety of theories as to the perceived radicalization of American prisoners since 9/11, ranging from a misguided identification with terrorist leaders such as Osama bin Laden, to the radical preachings of jailhouse religious leaders, it became readily apparent that today’s F.B.I. is as out of touch with reality as the one headed by J. Edgar Hoover, which for decades denied the existence of the mafia.

As one who has been confined in the Illinois Department of Corrections since 1967, I myself have observed a change in the attitudes and political philosophy of the average American prisoner, shaped not because of an external event occurring in some distant land, or the importation of some radical religion; but instead, due to the unrelenting assault upon prisoners by state houses around the nation, the unwillingness and/or inability of states to protect those who are imprisoned in their penal systems, the dual-standard of justice imposed upon prison guards who commit criminal acts against prisoners, and the daily vilification and demonization of those caught up in the criminal justice system, best exemplified in such television shows as “Cops”, “Nancy Grace”, and MSNBC’s “Lockup” the ultimate in reality programming.

To help one get a clearer understanding of this issue, let us utilize the eyes of a hypothetical prisoner (we’ll call him “Tony”) returning to the Menard Correctional Center, after living in the outside world for the last decade; what would he observe? Probably the first thing he would sense is a feeling of abandonment, due to the near complete abolishment of any meaningful rehabilitative programming. Thanks to the efforts of William Jefferson Clinton, the college classrooms have been long shuttered, as have the vocational schools, due to the elimination of prisoner access to the federal government’s Pell Grants.

Tony would further note that the prison has abolished every organizational recreational activity previously used to release tension and help maintain control of the facility. Now he would find himself confined in a space 4′ 3″ by 10′, with another prisoner, for a minimum of 159 hours a week, with little but a television set to help while away the hours. His cell is so small that it contains no table or chair, and the space between the bunks is so small 26″ that he must sit on the toilet if he wishes to write a letter. Other than that, his only options are to lie down, or stand up.

Although lockdowns occurred during Tony’s previous incarceration, they were primarily used in response to large-scale confrontations between various factions of the prison community, and to conduct periodic searches for contraband. He will now see that they are routinely scheduled to facilitate employee absences over the Thanksgiving and Christmas holidays, as well as the annual deer-hunting season.

When he walks into the dining room, he will discover he is now allotted only ten minutes to eat a barely palatable meal, but due to the miniscule portions, that will be more than a sufficient amount of time. Surprisingly, he will learn that the prison guard’s union has publicly described the food served as “barely edible1.”

If he believes that the conditions he is confined under are unconstitutional, this is probably at least partially attributable to the fact that the federal enforcement of civil rights laws has dropped precipitously since 1999. According to the Transactional Records Access Clearinghouse at Syracuse University, the Justice Department has seen the prosecution of civil rights cases fall by one-third through 2005. Additionally, the state statute that allowed clergy and attorneys to monitor the constitutional rights of prisoners was repealed.

Borrowing some reading material from a neighbor, Tony reads multiple examples of the duplicitous nature of the criminal justice system, how it inflicted Draconian penalties upon those who committed trivial offences during incarceration, while those employed by the government would receive, at worst, a mere slap on the wrist, when discovered abusing those under their control. The penalty imposed upon Colorado prisoner Douglas Wilson for passing out an extra cheese sandwich to fellow convicts was three additional years in prison; while in May 23, 2006 Illinois prison guard Clarence Howard was sentenced to two years probation for smuggling drugs into the facility where he worked.2 When Pennsylvania prisoner Darren Miller threw urine on a guard, he had 15 more years tacked onto his sentence, whereas Hawaiian prison guard Brian Freitas was placed on one year’s probation for his rôle in the murder of prisoner Antonio Revera.3

However, what Tony found the most appalling were the direct assaults upon the minimal rights of those confined all around the country. When inmates had the audacity to actually seek the protection of laws enacted by state legislatures, they discovered the courts unwilling to ensure the safeguarding of these basic rights. When the mother of a Connecticut prisoner sued the state for the failure to treat her son in accordance with the state’s “Patient’s Bill of Rights”, the prison system did not deny the allegations; rather they claimed in court that the Bill of Rights did not apply to prisoners. The state’s supreme court agreed.

After receiving numerous complaints of employee misconduct against youths confined in Oklahoma’s maximum security prison for youthful offenders, the state’s attorney general’s office declined to investigate, citing budgetary woes. This is the same state that chose to expend millions of dollars to secure additional life sentences against Timothy McVie’s co-defendant, Terry Nichols, after he had already received a life sentence in federal court.

Closer to home, Tony gained a degree of understanding as to why Illinois’ prisons appeared to be in a state of mismanagement. This came to light as he read about the investigation of the March 2, 2006 murder of an inmate at the Muddy River Correctional Center, where it was discovered that assistant warden Julie Wilkerson’s only apparent qualifications for her job were the campaign contributions she made to Governor Rod Blagojevich. Ms. Wilkerson is a former music teacher, with no prior prison experience.

Tiring of this self-flagellation, Tony turns on the television, where he discovers that law and order shows appear to be the flavor of the day. As he looks in on “The Nancy Grace Show”, he quickly discerns that Miss Grace routinely projects an attitude of unbridled anger and animosity towards anyone who disagrees with her prosecutorial mindset. Most frightening in her telecasts are the incessant and one-sided diatribes spewed forth against whichever criminal defendant she is focusing on in that particular episode. While her viewers may not be cognizant of her ability to appreciate the finer points of due process, the Georgia Supreme Court has, as it rebuked her on multiple occasions for her “unethical behavior” in securing criminal convictions. In comparison to this bubble-headed bleach blonde, Ann Coulter is a flaming liberal.

Flipping the dial, in search of something less intense, Tony tunes into “Cops”, a program devoted almost entirely to showing slow-footed African and Appalachian Americans attempting to out-run the police unsuccessfully, I might add and then being body slammed to the ground when they get caught. While not a serious show, it still serves to humiliate and dehumanize those appearing on it.

Lastly, he tunes into MSNBC’s “Lockdown”, undoubtedly the most insightful of the crime programs he has seen, as the camera takes the viewer into prisons across the nation mostly maximum and super-maximum security for an up-close and personal view. Unfortunately, what it so clearly displays is the rampant brutality and stifling isolation these human beings are exposed to, year after year. Little mention is made to explain how these prisoners could possibly be expected to successfully re-enter society after surviving this man-made hellhole.

As this story comes full circle, Tony wishes that for just one day, those high-ranking F.B.I. officials could experience what prisoners around the nation have to live with on a daily basis. Only then could they begin to conceptualize the mis-treatment being inflicted upon those incarcerated in America’s prisons, and the anger it breeds. Perhaps at this juncture they would realize that while there is a definite undercurrent of alienation and animosity within the country’s prison population, it is not a radicalization born from the exposure to the vitriolic venom spewing from the mouths of psychotic mass murderers such as Osama bin Laden, an individual I would happily speed on the way to his reward of 72 virgins.

No, my “radicalization” as you describe it, has been incubated and nurtured by this cesspool you call a penal system, and every day your brutality adds yet another name on the rolls. At what point will you sit up and take note?

This entry was posted in RagBlog and tagged Federal Prisons, Prison Conditions, Prisons. Bookmark the permalink.

6 Responses to Life in American Prisons: Radicalizing the Masses