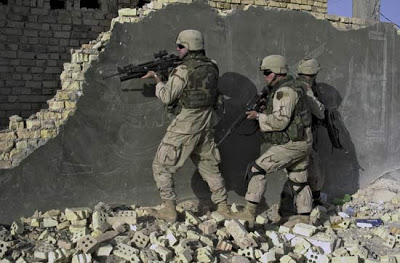 BAGHDAD -Iraqi lawmakers say the United States is demanding 58 bases as part of a proposed “status of forces” agreement that will allow U.S. troops to remain in the country indefinitely.

Leading members of the two ruling Shiite parties said in a series of interviews the Iraqi government rejected this proposal along with another U.S. demand that would have effectively handed over to the United States the power to determine if a hostile act from another country is aggression against Iraq. Lawmakers said they fear this power would drag Iraq into a war between the United States and Iran.

“The points that were put forth by the Americans were more abominable than the occupation,” said Jalal al Din al Saghir, a leading lawmaker from the Islamic Supreme Council of Iraq. “We were occupied by order of the Security Council,” he said, referring to the 2004 Resolution mandating a U.S. military occupation in Iraq at the head of an international coalition. “But now we are being asked to sign for our own occupation. That is why we have absolutely refused all that we have seen so far.”

Other conditions sought by the United States include control over Iraqi air space up to 30,000 feet and immunity from prosecution for U.S. troops and private military contractors. The agreement would run indefinitely but be subject to cancellation with two years notice from either side, lawmakers said.

“It would impair Iraqi sovereignty,” said Ali al Adeeb a leading member of Prime Minister Nouri al Maliki’s Dawa party of the proposed accord. “The Americans insist so far that is they who define what is an aggression on Iraq and what is democracy inside Iraq… if we come under aggression we should define it and ask for help.”

Both Saghir and Adeeb said that the Iraqi government rejected the terms as unacceptable. They said the government wants a U.S. presence and a U.S. security guarantee but also wants to control security within the country, stop indefinite detentions of Iraqis by U.S. forces and have a say in U.S. forces’ conduct in Iraq.

The 58 bases would represent an expansion of the U.S. presence here. Currently, the United States operates out of about 30 major bases, not including smaller facilities such as combat outposts, according to a U.S. military map.

” Is there sovereignty for Iraq – or isn’t there? If it is left to them, they would ask for immunity even for the American dogs,” Saghir said. “We have given Bush our views – some new ideas and I find that there is a certain harmony between his thoughts and ours. And he promised to tell the negotiators to change their methods.”

Maliki returned Monday from his second visit to Iran, whose Islamic rulers are adamantly opposed to the accord. Iran’s Supreme leader Ayatollah Ali Khamanei said following meetings with Maliki that we have “no doubt that the Americans’ dreams will not come true.”

Hoshyar Zebari, the Iraqi foreign minister, criticized the lawmakers for poisoning the public discussion before an agreement is concluded. He said U.S. officials had been flexible in the talks, as well as “frank and honest since the beginning.”

“This is an ongoing process,” Zebari said. “There is no agreement yet. Proposals have been modified, they have been changed and altered. We don’t have a final text yet for them to be judgmental.”

Zebari, who said a negotiating session was held with U.S. officials on the new accord Monday, said any agreement will be submitted to the Iraqi parliament for approval. Leaders in the U.S. Congress have also demanded a say in the agreement, but the Bush administration says it is planning to make this an executive accord not subject to Senate ratification.

Republican presidential candidate John McCain didn’t respond for requests for comment, but the presumptive Democratic nominee, Barack Obama, said through a spokesman that he believes the Bush administration must submit the agreement to Congress and that it should make “absolutely clear” that the United States will not maintain permanent bases in Iraq.

Lee Hamilton, a former Democratic congressman from Indiana, said he had not heard of a plan to seek 50 or more bases in Iraq, and that if it is the case, Congress is likely to challenge the idea. “Congress would have a lot of questions, and the president should be very careful in negotiating,” Hamilton, who now directs the Woodrow Wilson Center for Scholars, told McClatchy.

“Look, there is going to be no occupation,” said U.S. spokesman Adam Ereli. “Now it’s perfectly understandable that there are those that are following this closely in Iraq who have concerns about what this means for Iraqi sovereignty and independence. We understand that and we appreciate that and that’s why nothing is going to be rammed down anybody’s throat.

“It’s kind of like a forced marriage. It just doesn’t work. They either want you or they don’t want you. You can’t use coercion to get them to like you,” he added.

U.S. officials in Baghdad say they are determined to complete the accord by July 31 so that parliamentary deliberations can be completed before the Dec. 31 expiration of the UN mandate.

The agreement will not specify how many troops or where they will be deployed, said a U.S. official who asked not to be named due to the sensitivity of the subject, but the agreement will detail the legal framework under which U.S. troops will operate. The U.S. official said that in the absence of a UN resolution authorizing the use of force, “there have to be terms that are in place. That’s the reality that we’re trying to accommodate.”

Iraqis are determined to get their nation removed from the purview of the U.N. Security Council under Chapter 7 of the U.N. Charter, which allows the international body to declare a country a threat to international peace, a step the U.N. took after Saddam Hussein invaded Kuwait. Iraqi officials say that designation clearly is no longer appropriate.

But even on that basic request, the U.S. has not promised to support Iraq, Saghir said, and is insteadn withholding that support as a pressure point in negotiations.

U.S. demands “conflict with our sovereignty and we refuse them,” said Hassan Sneid, a member of the Dawa party and a lawmaker on the security committee in the parliament. “I don’t expect these negotiations will be done by the exact date. The Americans want so many things and the fact is we want different things.”

“If we had to choose one or the other, an extension of the mandate or this agreement, we would probably choose the extension,” Saghir said. “It is possible that in December we will send a letter the UN informing them that Iraq no longer needs foreign forces to control its internal security. As for external defense, we are still not ready.”