Liposuction: The Key to Energy Independence 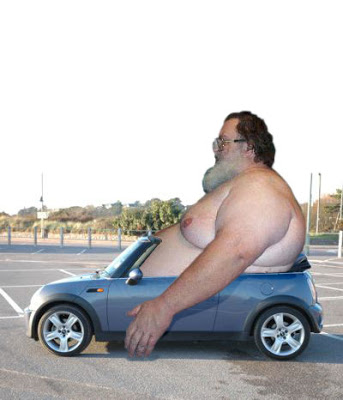 Everyone talks about our terrible dependency on oil — foreign and otherwise — but hardly anyone mentions what it is. Fossil fuel, all right, but whose fossils? Mostly tiny plants called diatoms, but quite possibly a few Barney-like creatures went into the mix, like Stegosaurus, Brontosaurus and other giant reptiles that shared the Jurassic period with all those diatoms. What we are burning in our cars and keeping our homes warm or cool with is, in other words, a highly processed version of corpse juice.

Think of this for a moment, if only out of respect for the dead. There you were, about 100 million years ago, maybe a contented little diatom or a great big Brontosaurus stumbling around the edge of a tar pit — a lord of the earth. And what are you now? A sludge of long-chain carbon molecules that will be burned so that some mammalian biped can make a CVS run for Mountain Dew and chips.

It’s an old human habit — living off the road kill of the planet. There’s evidence, for example, that early humans were engaged in scavenging before they figured out how to hunt for themselves. They’d scan the sky for circling vultures, dash off to the kill site — hoping that the leopard that did the actual hunting had sauntered off for a nap — and gobble up what remained of the prey. It was risky, but it beat doing your own antelope tracking.

We continue our career as scavengers today, attracted not by vultures but by signs saying “Safeway” or “Giant.” Inside these sites, we find bits of dead animals wrapped neatly in plastic. The killing has already been done for us — usually by underpaid immigrant workers rather than leopards.

I say to my fellow humans: It’s time to stop feeding off the dead and grow up! I don’t know about food, but I have a plan for achieving fuel self-suffiency in less time than it takes to say “Arctic National Wildlife Refuge.” The idea came to me from reports of the growing crime of French fry oil theft: Certain desperate individuals are stealing restaurants’ discarded cooking oil, which can then be used to fuel cars. So the idea is: why not could skip the French fry phase and harvest high-energy hydrocarbons right from ourselves?

I’m talking about liposuction, of course, and it’s a mystery to me why it hasn’t occurred to any of those geniuses who are constantly opining about fuel prices on MSNBC. The average liposuction removes about half a gallon of liquid fat, which may not seem like much. But think of the vast reserves our nation is literally sitting on! Thirty percent of Americans are obese, or about 90 million individuals or 45 million gallons of easily available fat — not from dead diatoms but from our very own bellies and butts.

This is the humane alternative to biofuels derived directly from erstwhile foodstuffs like corn. Biofuels, as you might have noticed, are exacerbating the global food crisis by turning edible plants into gasoline. But we could put humans back in the loop by first turning the corn into Doritos and hence into liposuctionable body fat. There would be a reason to live again, even a patriotic rationale for packing on the pounds.

True, liposuction is not risk-free, as the numerous doctors’ websites on the subject inform us. And those of us who insist on driving gas guzzlers may soon start depleting their personal fat reserves, much as heroin addicts run out of useable veins. But the gaunt, punctured, look could become a fashion statement. Already, the combination of a tiny waist and a huge carbon footprint–generated by one’s Hummer and private jet — is considered a sign of great wealth.

And think what it would do for our nation’s self-esteem. We may not lead the world in scientific innovation, educational achievement, or low infant mortality, but we are the global champions of obesity. Go here and you’ll find America well ahead of the pack when it comes to personal body fat, while those renowned oil-producers — Saudi Arabia, Venezuela and Iran — aren’t even among the top 29. All we need is a healthy dose of fat pride and for CVS to start marketing home liposuction kits. That run for Mountain Dew and chips could soon be an energy-neutral proposition.