In Congressman Lloyd Doggett (D., Texas) we have one of the clearer, more conscientious voices in Washington representing some of us.

This is a reminder to keep him informed of your best thinking on these and other subjects of federal concern. You can sign up to receive Lloyd’s newsletter at his official site, and that has gotta be a good thing, too.

I just received the following from Cong. Doggett about the bailout and his renewed communication with the Fed’s Ben Bernanke. 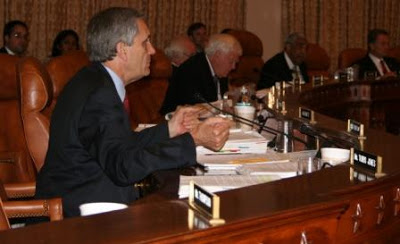 Questioning Bernanke about the alleged oversight of the Bailout
By Lloyd Doggett / October 23, 2008

Returning to Washington on Monday for a House Budget Committee hearing, I questioned Ben Bernanke, Chairman of the Federal Reserve and the Financial Stability Oversight Board, which is supposed to ensure proper execution of the bailout.

As you recall, over my opposition, President Bush signed the bailout into law.

… (Bernanke’s) responses reveal that no federal regulator has been fired or disciplined as a result of the regulatory failures that led to the bailout. Nor have any executives from troubled institutions benefiting from the bailout been required to forgo pay raises and bonuses.

Additionally, since the bailout, the Treasury Department has further weakened the very modest limitations contained in the legislation for ‘golden parachutes’ or departure bonuses. For example, if an executive earned $10 million in compensation annually and exercised stock options worth a total of $30 million in the prior three years, then his average annual pay would rise to $20 million, still entitling him to a golden parachute of $59.9 million. That is not a trimmed parachute.

Because my time was very limited, I could not raise all of my questions with Chairman Bernanke, but I did make additional observations with other witnesses… (W)e now have reports of yet another contradiction from bailout promoters. After being repeatedly told that some financial institutions are too big to permit them to fail, we are advised that some major banks, with the encouragement of the Treasury Secretary Paulson, will use their new taxpayer-funded loans to get bigger. Instead of making new loans available, they plan to acquire other banks.