Lobbyists : The Boys on McCain’s Bus 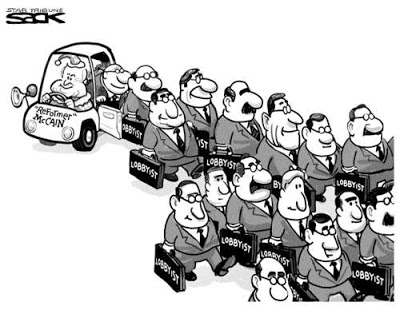 ‘A gang of lobbyist-insiders — at odds with his supposed devotion to maverick change — runs McCain’s Washington-based campaign.’
By Sherman De Brosse / The Rag Blog / October 28, 2008

This is the fifth in a series by Rag Blog contributor Sherman De Brosse, a retired history professor, on John McCain, his shady involvements, past and present, and his wrong-headed and ill-informed political positions.

Trying to rehabilitate his reputation after the “Keating Five” Scandal, John McCain assiduously projected an image of integrity and a myth of greatness. In fact, he continued to run errands for contributors.

Recently, McCain denied ever meeting Lowell “Bud” Paxson, even though there was a 2002 court deposition proving they had met. This is important because in 1999, McCain, then chairman of the Senate Commerce Committee, pressed the FCC hard to let Paxson Communications purchase a Pittsburgh television station. The FCC claimed McCain’s request seemed like a threat and believed he had crossed the line separating propriety and impropriety. The firm had donated $20,000 to McCain. The firm had provided McCain transportation on a company jet on several occasions.

Very briefly, the press raised questions about his relationship with a pretty young Paxson lobbyist, Vicki Iseman, who was often in his company in 2000. The head of the New York Times Washington bureau stood behind the story and said it was based on a lot of hard work and “multiple sources.” When the story about a possible fling came out, McCain acted strangely, avoiding reporters and some thought inadvertently playing the role of the guilty man. He and his campaign issued contradictory statements — a few marked by his characteristic petulance, and the matter of using improper tactics to help a contributor was never cleared up. The press quickly backed off of the entire story when McCain denied there was a sexual relationship and Republicans used it as an example of media bias.

When confronted with information about his conduct in the Paxson case, McCain said he was just prodding bureaucrats and then produced documents to show he had done the same thing in other cases involving large contributors. What chutzpah!

John McCain had very close ties to Cablevision, which gave $200,000 to his Reform Institute. In 1999 he did not recuse himself when Cablevision business was before his committee. Later, Chairman McCain wrote to the Federal Communications Commission urging them to permit the firm to repackage their offerings . When information surfaced about his tight relationship with Cablevision, he resigned as president of the Reform Institute. Recently, Verizon went to great effort to locate a special cell reception tower at McCain’s ranch at no expense to him. Then A,T& T did likewise.

In 1999, McCain staff twice intervened to help wealthy contributor and close personal friend Donald Diamond obtain land from closed Army base Fort Ord in California. That deal allowed him to turn a $20 million profit, and another arrangement in 2005, again with McCain help, promises to be more profitable. This involves as many as 12,000 homes and benefits more than one McCain backer. Two former McCain staffers were hired as lobbyists in this complex deal to get him aboard. Twice in the 1990s, McCain introduced land legislation to help Diamond, and a third measure is now before the Senate.

In 2001, questions were raised about legislation he backed for the cruise industry and the large contributions it gave him. There are also questions about his close ties to the cable TV industry.

On October 18, Howard Fineman of Newseek referred to the “gang of lobbyist-insiders, whose identity is glaringly — almost comically — at odds with his supposed devotion to maverick change, [that] runs McCain’s Washington-based campaign.”

Recently, it was learned that John McCain had more lobbyists working for his 2008 campaign than any other presidential candidate. It is absolutely infested with them, many from industries McCain was supposed to have regulated. A gang of lobbyist-insiders, whose identity is glaringly — almost comically — at odds with his supposed devotion to maverick change, runs McCain’s Washington-based campaign.

Even after six were forced to leave the campaign due to their ties to unsavory regimes, there are 59 who do nothing but raise money. One of them is Ralph Reed, who was shown to be taking advantage of Native American clients in hearings McCain chaired! Over time, 133 lobbyists have worked for the Straight talk Express. This is understandable as McCain has accepted more money from lobbyists than any other candidate in the 2008 primaries and general election.

Others do other things in the campaign. Rick Davis is campaign manager, and Charlie Black is senior political advisor. Davis has played a big role representing Indian casinos before McCain’s committee. Among Black’s clients were AT &T, Rupert Murdoch, and Blackwater. Twenty-one McCain people also represented AT&T. Black had also been paid to assist Ahmed Chalabi, whose distortions helped get the US to invade Iraq. Could this be connected to McCain’s view that American troops must soldier on there, possibly indefinitely?

Two lobbyists were closely tied to the mortgage industry, which could explain why McCain has been so very friendly to the same industry. Randy Scheunemann, McCain’s foreign policy analyst, has represented the Republic of Georgia, and spoke on McCain’s behalf on this issue as recently as August 17. This could explain why McCain is so hawkish about the Russo-Georgian struggle. He speaks as though he is already president, keeping force and all other options on the table. Lobbyist Bill Timmons, head of McCain’s presidential transition operation, had been Saddam Hussein’s chief lobbyist in the US after the first Gulf War.

None of this information is to suggest Mc Cain is a crook. He is obviously very closely tied to the lobbyists and special interests that he frequently complains about. There is no doubt that he has a history of going to bat for them — sometimes appearing to go to far. He has repeatedly promised never to do anything that gives the appearance of impropriety, but his track record is just the opposite.

He probably is not a crook, and deserves great praise for his service in the Vietnam War. But he is only mortal and has a bad track record for consistency and truth telling, despite all his self-praise about honesty.

Any reasonable person would have problems with McCain’s claims to being a “maverick” after he made peace with “the agents of intolerance” and accepted their candidate for vice president. But if any doubts remain, surrounding himself with lobbyists should permanently erase the image of “maverick.” He was a tool of lobbyists in Charles Keating’s day, and remains one today.

1 Response to Lobbyists : The Boys on McCain’s Bus