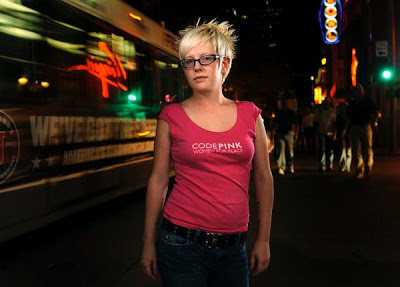 “How can we make ourselves less frightening? We aren’t this scary image that protesters often get painted as.” – Zoe Williams, CodePink. Photo by Joe Amon, The Denver Post.
New generation plans dissent
at Democratic Convention
By Colleen O’Connor / June 22, 2008

That funky fusion of protest, performance and pompoms.

The new generation of activists, and the daisy-in-the-rifle protesters who birthed them, is busy with creative ferment, organizing public dissent for the Democratic National Convention here in August. They are motivated by the desire to create social change with people power, not political power, frustrated by a mounting list of problems, from the housing crisis to soaring prices for gas and food.

“There will be a lot of people at this convention who are progressive and who are angry at the Democrats,” says Virginia Trabulsi, who has worked for years with the anti-war group United for Peace and Justice.

“They’re saying, ‘Why have we not impeached Bush? Why is Homeland Security out of control?'”

Tens of thousands of activists are expected, homegrown and imported. Some plan to drive FEMA trailers up from Mississippi for a media-savvy statement about continuing Hurricane Katrina struggles. Others are coming from Seattle, like the Backbone Campaign, which will haul 70-foot-tall political puppets called The Chain Gang: prison-suited images of Bush, Dick Cheney and Donald Rumsfeld.

Socialists have formed an alliance with military veterans who are against the Iraq war.

Anarchists will give workshops on guerilla gardening, or political gardening, a style of nonviolent action that takes on issues like land ownership by occupying abandoned lots — sometimes in the dead of night — and transforming them into urban gardens.

And then there are the pacifists, groups like the historic American Friends Service Committee founded by Quakers in 1917, which plans to host an exhibition called “The Costs of War,” detailing how the $720 million spent each day on the war could be spent on education and housing.

Beyond that, beliefs differ. So do strategies.

Some protesters espouse the right to active self-defense if they are treated too harshly. On the other side are those who say that violence, verbal or physical, is never an acceptable tool on the path toward peace.

In America, this debate is as old as the war between the North and the South.

“It goes back to the abolitionist movement during the Civil War,” says Ira Chernus, professor of religious studies at the University of Colorado at Boulder.

As Chernus points out in his recent book, “American Nonviolence: The History of an Idea,” nonviolence is an integral thread in the fabric of U.S. history.

“From the 1820s to the 1950s, scarcely a decade went by that a nonviolent movement did not play some significant role in the practical outcome of political, social and economic events,” he says.

From the Civil War to the civil-rights movement, from the labor movement to the environmental movement — and now, in Denver, activists young and old, the progressives and the radicals, will enact the next chapter of the nonviolent movement in America, addressing everything from the Iraq war to global warming.

“If I called my granddad an environmentalist,” says Adam Jung, “he’d smack me, but those are his values.” Tent State workshops will train activists in nonviolent direct action. (Joe Amon, The Denver Post)activists young and old, the progressives and the radicals, will enact the next chapter of the nonviolent movement in America, addressing everything from the Iraq war to global warming.

The local spokeswoman for CodePink is Zoe Williams, a 22-year-old platinum blond with spiky hair, rectangular glasses and a penchant for black-and-white polka-dot canvas shoes.

She’s part of the new face of activism, a youth-driven alliance that includes Students for Peace and Justice, Students for a Democratic Society, and Tent State

“We were putting in all this work” for the convention, Jojo Pease says, and thought, “What’s going to happen afterward?” The answer: a chapter of Students for a Democratic Society, reborn two years ago. (Joe Amon, The Denver Post )University. Her goal is to help restore the image of activists everywhere.

“One of the big things about the colorful, creative protests is to show that we are a very interesting, artistic, positive group of people. We aren’t this scary image that protesters often get painted as.”

She works closely with guys like Adam Jung, a farm boy from Missouri who now studies at the University of Denver and spends his free time organizing Tent State University, mobilizing students to confront the Democrats and end the war.

“I’m definitely not right-wing or conservative, but I do identify with rural values,” Jung says. “If I called my granddad an environmentalist, he’d smack me, but those are his values.”

The base camp he envisions for Tent State University will include thousands of tents staked in City Park, with a music festival featuring political hip-hoppers The Coup and Wayne Kramer, who played with his old group the Motor City 5 during the 1968 Democratic National Convention in Chicago. Tent State workshops will train activists in nonviolent direct action,and focus on building a grassroots movement.

And from this idea sprang the newly minted Denver chapter of the Students for a Democratic Society.

“We were talking a lot about Tent State, which is not actually an organization but more a technique or strategy,” says 25-year-old Jojo Pease. “I was feeling a little disappointed. We were putting in all this work, but I thought, ‘What’s going to happen afterward?’ “

To capture the momentum created at the DNC, they decided to start a Denver chapter of Students for a Democratic Society.

Back in the 1960s, the SDS was the most influential group of radical student activists in the country. It died out in 1969 but was re-created two years ago and is now one of the fast-growing groups of young activists, with more than 300 chapters on college and high school campuses. The goal is to create a society free from poverty, war, racism and sexism.

Whether rooted in the ’60s or the ’00s, activists are driven by the same fuel.

“We are passionate people who really spend way too much time thinking about all the awful stuff in the world that’s so urgent,” says Sarah Gill, program director for the Denver office of the American Friends Service Committee. “We just want to do the right thing, and it matters if we do it the right way, because people’s lives depend on it.”

Six months ago, with his eye on the convention, longtime activist Ron Forthofer created a group called The People Call for Change.

Their action plan for the convention calls not for a protest, nor a demonstration, but a series of events to be held in churches and community centers — educational evenings that will dangle a hopeful vision of how a grassroots movement might lead the country in a new direction. Topics include health care, consumerism, the environment and civil liberties.

“The thing that is driving all of us is that we want to reclaim our country, to restore it and make it be a government and a country by and for the people,” he says.

“There’s a lot of alienation out there today, a feeling that both parties have abandoned their responsibilities to the people.”