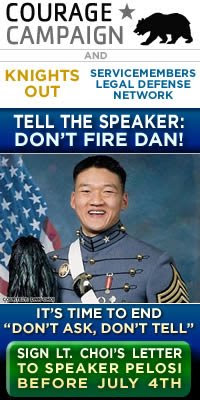 Bolstered by more than 300,000 signatures to letters of support… Lt. Dan Choi is now taking his fight to repeal the discriminatory ‘Don’t Ask, Don’t Tell’ policy to Congress.

On Tuesday, a military board told Lt. Dan Choi — an Iraq War veteran and Arabic linguist — that it was recommending his discharge from the Army for “moral and professional dereliction” under the military’s “Don’t Ask, Don’t Tell” policy.

Despite this setback, Lt. Choi is not giving up. Bolstered by more than 300,000 signatures to letters of support calling for the repeal of DADT, Dan is now taking his fight to repeal the discriminatory “Don’t Ask, Don’t Tell” policy to Congress.

Dan needs your help as soon as possible. The sooner DADT is repealed, the sooner he can return to service.

I just signed the letter below to Speaker Nancy Pelosi that Lt. Choi is going to personally deliver to her. The letter is being launched on Lt. Choi’s behalf by the Courage Campaign, Knights Out and the Servicemembers Legal Defense Network.

We need Speaker Pelosi to take leadership now and speak out publicly in favor of current legislation in Congress that would repeal the “Don’t Ask, Don’t Tell” policy.

More than 50,000 people, including me, have signed Lt. Choi’s letter in just a few hours. Will you join me in signing it and urge your friends to do the same? Just click on the link below to add your name by clicking here: Courage Campaign