M. Wizard and D. Hamilton Discuss the Seizure of the Children of Eldorado 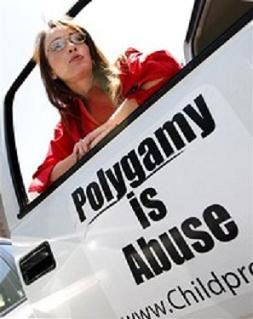 Flora Jessop poses with her truck Friday April 18, 2008 in Phoenix, Ariz. Jessop is a former member of the Fundamentalist Church of Jesus Christ of Latter Day Saints who left the church years ago and leads the nonprofit Child Protection Project. Photo by Aaron J. Latham / AP.
Predators mask themselves with religious trappings.
By Mariann Wizard / The Rag Blog

I have mixed feelings about the El Dorado child seizures by the state, with the situation as it has been reported, not least because of the “as it has been reported” part of that phrase. On the one hand, 40-plus years of First Amendment activism, not to mention an intellectual interest in religious or spiritual belief, attests to my commitment to freedom of religion and the separation of church and state.

On the other hand, one would have to be blind and deaf to be unaware of the many instances in which predators of various types have masked themselves with religious trappings! Where their predation includes child abuse, I do not favor their being protected by their allegedly religious beliefs. On yet another hand, I am personally aware that Texas’ Child Protective Services, like MH/MR, is riddled with a peculiar class of meddling bureaucrat who have probably destroyed as many rural families as methedrine.

Sometimes it is useful, in multi-layered questions of political ethics, to re-cast an issue in slightly different terms for discussion. So, I was wondering, how would you/we feel if:

a) a Catholic childrens’ home had been raided and the children relocated amid allegations of priestly sexual abuse?

b) the Methodist Children’s Home at Waco had been raided, etc., amid allegations of pastoral same?

c) a Santeria (“voodoo”) cult in South Texas had been investigated for alleged blood sacrifice of children?

d) a speed lab in Johnson County were raided and underage children allegedly selling speed at the door for their “cooker” parents were taken into state custody?

e) a pregnant 15-year old illegal immigrant was removed from her family home amid allegations that her brothers, “former members” of a foreign gang, were pimping her out?

Do opponents of the El Dorado raid feel that there are any circumstances in which it is appropriate for the state to remove minor children from their parents, guardians, or homes? If so, what are they? What procedures would have to be followed, in your opinion, to give legitimacy to such actions? If not, and if the allegations in any of the above “hypothetical” situations (most of them based on actual past situations) were true, what options would you envision for the children involved?

Is “religion” a sufficient cloak for any behavior? Instances are rife of corrupt “religious” leaders who’ve served prison terms for financially fleecing their flocks; should they not have been held responsible for doing so?

In revolutionary situations dating back to the year one, religious authorities, institutions, and undercover agents have often tried to play on people’s beliefs to gain support for entrenched authority or the “old guard”, and to undercut revolutionary regimes. (Yes, certainly, there are notable exceptions to this; religious leaders who have served the people.) Should counter-revolutionary religious activism be allowed? Or should, for example, priests be restricted from wearing their ecclesiastical gear in public, as they are in Mexico? Where, if anywhere, does religious practice cross the line into the public sphere and become subject to law? 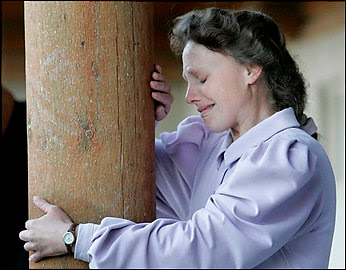 Marie, a mother of three boys, members of the Fundamentalist Church of Jesus Christ of Latter Day Saints gets emotional while on the premises of the Yearning for Zion Ranch in Eldorado, Texas, as she responds to questions about their 11-day experience in a shelter in San Angelo,Texas Monday April 14, 2008. Photo by Tony Gutierrez / AP.
Aren’t we suppposed to have a “system of laws”?
By David Hamilton / The Rag Blog

I’m no lawyer, but here are some of my thoughts on the El Dorado issue.

First, let me admit that I have been known to give gratuitous shit to Mormon missionary kids on the streets of Guatemala and on my front door step on numerous occasions. Of all the world’s ridiculous and offensive organized religions, they may be the worst. I discriminate against them with few reservations, wouldn’t vote for Mitt Romney if he were an anarchist and wouldn’t live in Utah for a million dollars. And that applies to regular Mormons, let alone fundamentalists.

Of course El Dorado is full of racist, sexist incestuous polygamists who probably ought to be in some dark dungeon for their dastardly deeds, but at this point the state lacks a few essential things to convict: people complaining of being victims, witnesses who might willingly testify for the prosecution and much tangible evidence of a crime at all. Another problem is the fact that the phone call that triggered the raid was a hoax, so the original warrant is likely baseless. The evidence the state now has seems to be several pregnant girls under 18 discovered during the raid. Reagan High School probably has just as many and most of the fathers there are adults too.

So the state forces all the El Dorado people to give DNA samples so it can develop evidence. Is this not unreasonable search and seizure? Aren’t they being forced to testify against themselves under duress? And when it is required of everyone living in the compound, isn’t this group punishment beforehand for alleged and unproven crimes committed by individuals?

People say that the state has to act because all these El Dorado people, especially the women, are brain-washed and don’t know what’s good for them. This is more than a little sexist. But besides you and me, who isn’t a little brainwashed, especially in San Angelo? One man’s brainwashing is another man’s bedrock values.

I also wonder whether the fact that these people live very communally has anything to do with what has happened to them. Why, it would hardly be an exaggeration to say that they’re a bunch of communists. They seem to share about everything including husbands. So they start off being in flagrant violation of the sacred American creed of individualism.

Does the state ever have the right to take children away from their parents? Of course they do. Like when the kid shows up at school or at a doctor’s office with bite marks as in the case now being adjudicated here in Austin. In other words, when there is clear evidence of abuse or neglect. At El Dorado, they had a bogus phone call. When they do have well founded allegations, they usually send an case worker into the home to investigate. Why didn’t they do that here?

But let’s say that the state is somehow able to get a warrant based on something tangible. Couldn’t they have gone into the compound and just stayed there as long as they needed to gather evidence without busting up the whole community and shipping the kids all over the state? I can see the police setting up a big tent in the middle of the compound and conducting interviews, having doctors examine the minors, checking birth certificates and marriage licenses, etc, as a first step. Instead, they went in bristling with weapons with buses loaned by the Baptists as the second wave in order to take away all the women and children, which they had obviously planned to do before they even went in.

Now this might all be a bunch of amateur legalistic thinking, but aren’t we supposed to have “a system of laws, not of men”? So what is to be done now? The state should throw in the towel until it has something stronger to go on. Then go into the compound as suggested above. The alternative will be lots of long drawn-out legal proceedings where I think the state will, for the most part, lose. But maybe the lawyers among us can weigh in on this with more authority.
raid on the Eldorado polygamist compound and its aftermath.