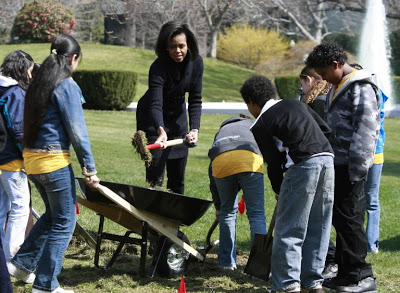 After President Obama was elected, and even before the magnitude of the recession became apparent, there was a push from community food activists to plant a “Victory Garden” on the South Lawn of the White House. Led by Roger Doiron, founder of the Kitchen Gardeners International, a Maine non-profit to encourage home gardening, a petition drive was started through the “Eat the View” campaign that gathered over 100,000 signatures using Facebook and other social networks to encourage the Obama’s to plant a garden. [On March 20, 2009,] Michele Obama, along with 23 fifth graders from the Bancroft Elementary School in Washington, DC, broke ground on an 1100 square foot plot. This will be the first garden on the lawn since Eleanor Roosevelt had a garden at the White House during the second world war. — Sustainable Agriculture. Photo from USA Today.

The Mid America CropLife Association (MACA) has a bone to pick with Michelle Obama. MACA represents chemical companies that produce pesticides, and they are angry that — wait for it — Michelle Obama isn’t using chemicals in her organic garden at the White House.

I am not making this up.

In an email they forwarded to their supporters, a MACA spokesman wrote, “While a garden is a great idea, the thought of it being organic made [us] shudder.” MACA went on to publish a letter it had sent to the First Lady asking her to consider using chemicals — or what they call “crop protection products” — in her garden.

Michelle Obama has done America a great service by publicizing the importance of nutritious food for kids (she’s growing the garden in partnership with a local elementary school class) as well as locally grown produce as an important, environmentally sustainable food source.

I just signed a petition telling MACA’s board members to stop using Michelle Obama’s garden to spread propaganda about produce needing to be sprayed with chemicals. I hope you will, too.