Made in the USA?

Let’s remember that the USA is the biggest arms manufacturer in the world. Using nothing but Las Vegas odds, the likelihood that all those “Iranian” arms being found in Iraq actually came from the USA is rather high. “[T]he US Congressional Research Service estimates that of arms transfers to developing countries in 2003, around 89% came from just 5 members of the G8: the US, Russia, France, the UK and Germany.” (‘Conventional Arms Transfers to Developing Nations, 1996-2003’ by Richard F. Grimmett, Congressional Research Service, 2004.) Of those five, the US exports more than 50% of their total arms exports.

As we see more and more examples of the US press lying outright to us as a result of Pentagon and other US government prompting, perhaps we should keep some basic facts in mind. Perhaps all this crowing about Iranian arms is nothing more than diversionary bullshit to keep us from looking where the guilt is greatest. 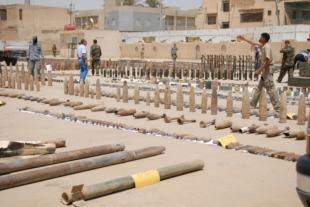 BAGHDAD — There was something interesting missing from Maj. Gen. Kevin Bergner’s introductory remarks to journalists at his regular news briefing in Baghdad on Wednesday: the word “Iran,” or any form of it. It was especially striking as Bergner, the U.S. military spokesman here, announced the extraordinary list of weapons and munitions that have been uncovered in recent weeks since fighting erupted between Iraqi and U.S. security forces and Shiite militiamen.

Not once did Bergner point the finger at Iran for any of these weapons and munitions, which is a striking change from just a couple of weeks ago when U.S. military officials here and at the Pentagon were saying that caches found in Basra in particular had revealed Iranian-made arms manufactured as recently as this year. They say the majority of rockets being fired at U.S. bases, including Baghdad’s Green Zone, are launched by militiamen receiving training, arms and other aid from Iran.

Today brought fresh attacks, including an unusual barrage fired at a military base used by British and U.S. forces in Basra, in southern Iraq. A statement said “several” rockets hit the base during the afternoon, and that initial reports indicated two civilian contractors were killed, and four soldiers and four civilians injured.

It was the first reported attack of its kind since March 27 in Basra.

Iraqi officials also have accused Iran of meddling in violence and had echoed the U.S. accusations of new Iranian-made arms being found in Basra. But neither the United States nor Iraq has displayed any of the alleged arms to the public or press, and lately it is looking less likely they will. U.S. military officials said it was up to the Iraqis to show the items; Iraqi officials lately have backed off the accusations against Iran.

A plan to show some alleged Iranian-supplied explosives to journalists last week in Karbala and then destroy them was canceled after the United States realized none of them was from Iran. A U.S. military spokesman attributed the confusion to a misunderstanding that emerged after an Iraqi Army general in Karbala erroneously reported the items were of Iranian origin.

When U.S. explosives experts went to investigate, they discovered they were not Iranian after all.

Iran, meanwhile, continues to seethe after an Iraqi delegation went to Tehran last week to confront it with the accusations. It has denied the accusations, and it says as long as U.S. forces continue to take part in military action in Iraq’s Shiite strongholds, it won’t consider holding further talks with Washington on how to stabilize Iraq.