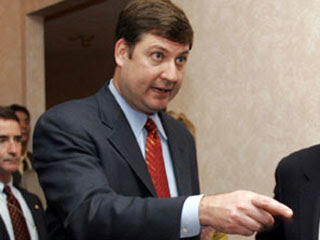 ‘Republican operative Chip Saltsman distributed a CD containing “Barack the Magic Negro” as part of his campaign to be elected chairman of the Republican National Committee; Republican chairman ‘appalled.’

Duncan, who has served the campaigns of five presidents dating back to Richard Nixon, is seeking reelection as the party’s 60th chairman in a hotly contested race that includes Saltsman and several other viable candidates.

Saltsman sent Republican National Committee members, who will choose the next chairman, a CD by conservative political satirist Paul Shanklin, “We HATE the USA.” It contains the controversial track, which was popular on conservative radio. Shanklin’s Web site promises “absolutely the best parodies in talk radio.”

Duncan’s statement, in full: “The 2008 election was a wake-up call for Republicans to reach out and bring more people into our party. I am shocked and appalled that anyone would think this is appropriate as it clearly does not move us in the right direction.”

Saltsman defended his song selection to The Hill’s Reid Wilson, who first reported the gift.

“Paul Shanklin is a longtime friend, and I think that RNC members have the good humor and good sense to recognize that his songs for the Rush Limbaugh show are light-hearted political parodies,” Saltsman told The Hill.

Saltsman said in a statement later Saturday that the title was a reference to an opinion article in the Los Angeles Times in March 2007 with the headline, “Obama the ‘Magic Negro,” which argued that “The Illinois senator lends himself to white America’s idealized, less-than-real black man.”

Saltsman’s statement said: “Liberal Democrats and their allies in the media didn’t utter a word about David Ehrenstein’s irresponsible column in the Los Angeles Times. … But now, of course, they’re shocked and appalled by its parody on the Rush Limbaugh Show. I firmly believe that we must welcome all Americans into our party and that the road to Republican resurgence begins with unity, not division. But I know that our party leaders should stand up against the media’s double standards and refuse to pander to their desire for scandal.”

Saltsman’s marketing campaign comes as Republicans grapple with ways to offer a counterpoint to President-elect Obama at a time when the country is largely supportive of his appointments and policies.

The national GOP ticket lost badly in November among many growing voter groups – including young people, Hispanics and suburbanites. Party officials says that a voter base consisting of the South plus social conservatives is not a dependable way to win elections.

In the “Republican Plan for Victory” that is Saltsman’s platform in the chairman’s race, he writes: “I believe that countering an emboldened Democratic Party, led by the Obama-Reid-Pelosi troika, requires an aggressive national strategy. This campaign’s message cannot depend upon traditional media outlets or communication methods. It will require building upon new media and developing and mastering new tactics.”

The disclosure by The Hill was met with an odd silence from Republican leaders. The story was posted at 12:10 p.m. on Friday, was quickly picked up by Talking Points Memo, and for a time was the banner headline on The Huffington Post, later replaced by Israeli’s strikes on Gaza.

Politico has exchanged e-mails with an aide to Saltsman, and will post a response when it arrives.

Saltsman is a former development director of the National Republican Senatorial Committee, and was elected chairman of the Tennessee Republican Party in 1998.

It may not be enough that Chip Saltsman, a candidate for chairman of the Republican National Committee, has recycled that bad Barack the Magic Negro tune in a CD of satirical songs that he has circulated to fellow Republicans. The tracks also include “The Star Spanglish Banner.”

Radio’s Rush Limbaugh already has been raked over the politically correct coals for supporting the tasteless takeoff on Puff the Magic Dragon that plays on racial prejudices about Barack Obama, president-elect of the United States. But now Saltsman, courting support for the national party’s chairmanship, has recycled the sad tune as part of a 41-tune CD of political songs by conservative satirist Paul Shanklin, as Politico.com tells the tale.

“Barack the magic Negro, lives in D.C…” (“Close-captioned for the thinking -impaired.”)

You get the drift.

Party tactician Chip Saltsman sent an emailing to RNC members with an attachment of political songs by the satirist Shanklin, according to Politico. The 41-track CD entitlled We Hate the USA includes other songs lampooning liberals, according to The Hill, such as Wright Place, Wrong Pastor, Love Client #9 and The Star Spanglish Banner

RNC Chairman Mike Duncan, seeking another term as chairman of the national party, has blasted Saltsman’s tactics in a statement released today, according to Politico.

“The 2008 election was a wake-up call for Republicans to reach out and bring more people into our party,” Duncan says today. ” I am shocked and appalled that anyone would think this is appropriate as it clearly does not move us in the right direction.”