Making an Impact by Stopping the Train 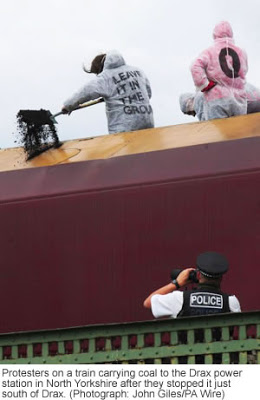 Climate change campaigners hijacked a train carrying coal to Britain’s biggest power station this morning, swarming on to the roof of its 20 huge trucks.

The 40 protesters stopped the regular delivery service to Drax in Yorkshire disguised as railway workers in yellow warning jackets and waving red flags, having read up on standard railway safety rules.

See the video.
Hear the audio.

The ambush took place at an iron girder bridge over the river Aire between the villages of Gowdall and Hirst Courteney at 8am GMT. One group then used the bridge girders and climbing equipment to scale the 12ft high trucks.They hoisted a huge banner reading “Leave it in the ground” – referring to the coal destined for the power station’s furnaces. The protesters carried food, water and even a portable lavatory with the intention of being able to remain on board for several days.

As the driver of the EWS train radioed for advice, a second group of protesters used shovels which they had also brought with them to start emptying the gravel-like power station coal on to the track. Police arrived half-an-hour later and sealed off the area, after calls from motorists stuck at a level crossing which was closed as a safety precaution.

A lone police constable was initially instructed to stay at the level crossing 500 yards from the train, but he was soon reinforced by other North Yorkshire officers. They sealed off the bridge from both sides, while the driver stayed in his cab.

“We are ready to stay here for as long as Gordon Brown and the government keep burning polluting fuel in these power stations,” said one of the protesters before clipping climbing ropes to the train’s wheels and the bridge girders. Although flimsy, the web would risk damage to the train or bridge if any attempt was made to drive off.

The raiders initially lay concealed on the edge of track as two earlier trains took supplies into Drax, whose eight vast cooling towers are guarded by coils of barbed wire. The power station was the scene of a spectacular but unsuccessful siege two years ago by Climate Camp, the group behind today’s action.

The rooftop group included one woman protester dressed as a canary – the traditional warning of dangerous pollution down a coal mine. She said: “The government and the country needs a warning,” before fixing on an orange cardboard beak to go with her bright yellow feather coat.

Commuters in the early morning rush hour included an engineer at Drax who was cycling to work and had to stop at the Hirst Courteney level crossing. He said: “There are interesting arguments to be had, but at the end of the day, these people use electricity like the rest of us, don’t they.”

The Drax line is likely to be closed until the protesters leave, and safety checks including the removal of the shovelled coal are expected to disrupt supplies to the power station for several days afterwards.

Drax responded to the hijacking by defending their record, setting out details of emission cuts of an estimated 3m tonnes a year at a cost of £180m. The plant, which supplies 7% of Britain’s electricity, is improving burning efficiency, says the company, and increasingly using renewable biofuels.

Melanie Wedgbury, head of external affairs at the plant, said: “We are the largest power station but also the cleanest and most efficient. It’s only because we are the biggest that we produce the most CO2. For every unit of electricity we generate, we generate less CO2 than any other of the coal-fired stations.”

The campaigners promised more protests later this summer, when another power station will face an attempt to close it down, similar to the Drax Climate Camp in 2006. One of the coal-shovellers on top of a freight wagon said: “Last year was Heathrow, this year it’ll be a coal-fired power station because those are the two big things, aviation fuel and burning coal.”

This entry was posted in RagBlog and tagged Civil Disobedience, Global Warming. Bookmark the permalink.