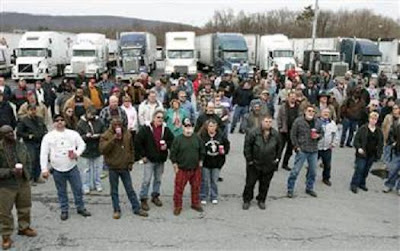 Until the beginning of this month, Americans seemed to have nothing to say about their ongoing economic ruin except, “Hit me! Please, hit me again!” You can take my house, but let me mow the lawn for you one more time before you repossess. Take my job and I’ll just slink off somewhere out of sight. Oh, and take my health insurance too; I can always fall back on Advil.

Then, on April 1, in a wave of defiance, truck drivers began taking the strongest form of action they can take: inaction. Faced with $4-per-gallon diesel fuel, they slowed down, shut down and started honking. On the New Jersey Turnpike, a convoy of trucks stretching “as far as the eye can see,” according to a turnpike spokesman, drove at a glacial 20 miles per hour.

Outside of Chicago, they slowed and drove three abreast, blocking traffic and taking arrests. They jammed into Harrisburg, Pennsylvania; they slowed down the Port of Tampa, where fifty rigs sat idle in protest. Near Buffalo, one driver told the press he was taking the week off “to pray for the economy.”

The truckers who organized the protests – by CB radio and Internet – have a specific goal: reducing the price of diesel fuel. They are owner-operators, meaning they are also businesspeople, and they can’t break even with current fuel costs. They want the government to release its fuel reserves. They want an investigation into oil company profits and government subsidies of the oil companies. Of the drivers I talked to, all were acutely aware that the government had found, in the course of a weekend, $30 billion to bail out Bear Stearns, while their own businesses are in a tailspin.

But the truckers’ protests have ramifications far beyond the owner-operators’ plight – first, because trucking is hardly a marginal business. You may imagine, here in the blogosphere, that everything important travels at the speed of pixels bouncing off of satellites, but 70 percent of the nation’s goods – from Cheerios to Chapstick – travel by truck. We were able to survive a writers’ strike, but a trucking strike would affect a lot more than your viewing options. As Donald Hayden, a Maine trucker put it to me: “If all the truckers decide to shut this country down, there’s going to be nothing they can do about it.”

More importantly, the activist truckers understand their protest to be part of a larger effort to “take back America,” as one put it to me. “We continue to maintain this is not just about us,” JB – which is his CB handle and stands for the “Jake Brake” on large rigs – told me from a rest stop in Virginia on his way to Florida. “It’s about everybody – the homeowners, the construction workers, the elderly people who can’t afford their heating bills… This is not the action of the truck drivers, but of the people.” Hayden mentions his parents, ages and 81 and 76, who’ve fought the Maine winter on a fixed income. Missouri-based driver Dan Little sees stores shutting down in his little town of Carrollton. “We’re Americans,” he tells me, “We built this country, and I’ll be damned if I’m going to lie down and take this.”

At least one of the truckers’ tactics may be translatable to the foreclosure crisis. On March 29, Hayden surrendered three rigs to be repossessed by Daimler-Chrysler – only he did it publicly, with flair, right in front of the statehouse in Augusta. “Repossession is something people don’t usually see,” he says, and he wanted the state legislature to take notice. As he took the keys, the representative of Daimler-Chrysler said, according to Hayden, “I don’t see why you couldn’t make the payments.” To which Hayden responded, “See, I have to pay for fuel and food, and I’ve eaten too many meals in my life to give that up.”

Read all of it here. / The Nation / The Rag Blog

This entry was posted in RagBlog and tagged Dissent, Economy, Transportation. Bookmark the permalink.