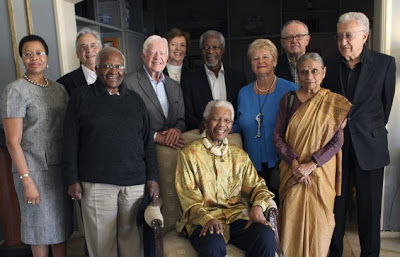 The Elders group of past and present world leaders, including former South African president Nelson Mandela and Archbishop Desmond Tutu, on Monday condemned as “completely inexcusable” the deadly Israeli attack on a flotilla carrying aid for Gaza.

At least 10 [and as many as 16] people are reported to have been killed when Israeli commandos raided the boats on Monday in an operation that has drawn international condemnation.

“The Elders have condemned the reported killing by Israeli forces of more than a dozen people who were attempting to deliver relief supplies to the Gaza Strip by sea,” the 12-member group said in a statement issued in Johannesburg, where it met over the weekend.

The group, which was launched by Mr. Mandela on his birthday in 2007 to try to solve some of the world’s most intractable conflicts, called for a “full investigation” of the incident and urged the UN Security Council “to debate the situation with a view to mandating action to end the closure of the Gaza Strip.” “This tragic incident should draw the world’s attention to the terrible suffering of Gaza’s 1.5 million people, half of whom are children under the age of 18,” the group said.

Israel’s three-year blockade of Gaza was not only “one of the world’s greatest human rights violations” and “illegal” under international law, it was also “counterproductive” because it empowered extremists in the Palestinian territory, they said. 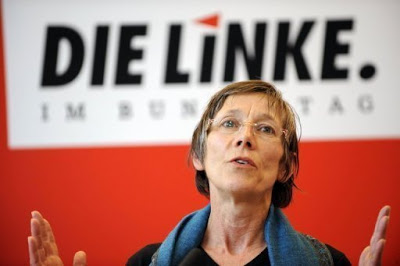 German lawmaker Annette Groth — who was on board the aid convoy when it was raided by Israeli commandos. Photo by AFP.
German activists contest Israeli version

Visibly shaken German activists who were on an aid ship bound for Gaza rejected on Tuesday Israeli claims that commandos were provoked by violence by those on board, saying it was a peaceful convoy…

“The Israeli government justifies the raid because they were attacked. This is absolutely not the case,” former MP Norman Paech, 72, wrapped in a blue blanket, told reporters after being deported back to Berlin…

“We had not prepared in any way to fight. We didn’t even consider it,” he added. “No violence, no resistance — because we knew very well that we would have absolutely no chance against soldiers like this.

“We wanted to show that we were peaceful.” — AFP

On May 31, the Israeli military attacked a flotilla of boats full of civilians attempting to deliver humanitarian supplies to the Gaza Strip. Reports indicate that at least nine and as many as 16 of the activists on board were killed, though details remain sketchy due to Israel’s censorious limitations on media coverage. Much of the U.S. media coverage has been remarkably unskeptical of Israel’s account of events and their context, and has paid little regard to international law.

The New York Times (6/1/10) glossed over the facts of the devastating Israeli siege of Gaza, where 1.5 million people live in extreme poverty. As reporter Isabel Kershner wrote, “Despite sporadic rocket fire from the Palestinian territory against southern Israel, Israel says it allows enough basic supplies through border crossings to avoid any acute humanitarian crisis.”

Asking Israel to explain the effects of its embargo on the people of Gaza makes little sense, especially when there are plenty of other resources available. The U.N. Office for the Coordination of Humanitarian Affairs reported (IRIN, 5/18/10):

As a consequence of Israel’s blockade of the Gaza Strip, 98 percent of industrial operations have been shut down since 2007 and there are acute shortages of fuel, cash, cooking gas and other basic supplies….

Water-related health problems are widespread in the Strip because of the blockade and Israel’s military operation in Gaza, which destroyed water and sanitation infrastructure, including reservoirs, wells, and thousands of kilometres of piping…

Chronic malnutrition has risen in Gaza over the past few years to reach 10.2 percent…

In Gaza, Israel’s blockade is debilitating the healthcare system, limiting medical supplies and the training of medical personnel and preventing serious medical cases from traveling outside the Strip for specialized treatment.

Israel’s 2008-2009 military operation damaged 15 of the Strip’s 27 hospitals and damaged or destroyed 43 of its 110 primary healthcare facilities, none of which have been repaired or rebuilt because of the construction materials ban. Some 15-20 percent of essential medicines are commonly out of stock and there are shortages of essential spare parts for many items of medical equipment.

Those facts, though, aren’t persuasive to everyone. The Washington Post‘s June 1 editorial page had one of the most appalling takes on the killings: “We have no sympathy for the motives of the participants in the flotilla — a motley collection that included European sympathizers with the Palestinian cause, Israeli Arab leaders and Turkish Islamic activists.”

Many of the analysis pieces in major papers focused on the fallout for Israel and the United States, rather than the civilians killed or the humanitarian crisis they were trying to address. The Post‘s Glenn Kessler (6/1/10) framed the U.S. response, not the Israeli attack, as the complicating factor: “Condemnation of Israeli Assault Complicates Relations With U.S.” Kessler lamented, “The timing of the incident is remarkably bad for Israel and the United States,” while a Los Angeles Times account (6/1/10) called the raid “a public relations nightmare for Israel.” The New York Times‘ Kershner wrote (NYTimes.com, 5/31/10) that “the criticism [of Israel over the attack] offered a propaganda coup to Israel’s foes, particularly the Hamas group that holds sway in Gaza.”

Other news accounts presented misleading context about the circumstances leading to Israel’s blockade. Kershner (New York Times, 6/1/10) stressed that “Israel had vowed not to let the flotilla reach the shores of Gaza, where Hamas, an organization sworn to Israel’s destruction, took over by force in 2007.” The Associated Press (6/1/10) reported that “Israel and Egypt sealed Gaza’s borders after Hamas overran the territory in 2007, wresting control from Abbas-loyal forces” — the latter a reference to Fatah forces affiliated with Mahmoud Abbas.

Both accounts ignore the fact that Hamas won Palestinian elections in 2006, which led the United States and Israel to step up existing economic restrictions on Gaza. An attempt to stoke a civil war in Gaza by arming Fatah militants — reported extensively by David Rose in Vanity Fair (4/08)–backfired, and Hamas prevailed (Extra!, 9-10/07).

Much of the U.S. press coverage takes Israeli government claims at face value, and is based largely on footage made available by Israeli authorities — while Israel keeps the detained activists away from the media (not to mention from lawyers and worried family members). The Washington Post (6/1/10) reported the attack this way:

Upon touching down, the Israeli commandos, who were equipped with paint guns and pistols, were assaulted with steel poles, knives and pepper spray. Video showed at least one commando being lifted up and dumped from the ship’s upper deck to the lower deck. Some commandos later said they jumped into the water to escape being beaten. The Israeli military said some of the demonstrators fired live ammunition. Israeli officials said the activists had fired two guns stolen from the troops.

As Salon.com‘s Glenn Greenwald wrote (5/31/10): “Just ponder what we’d be hearing if Iran had raided a humanitarian ship in international waters and killed 15 or so civilians aboard.”

The Times‘ June 1 report included seven paragraphs of Israel’s account of what happened on board the Turkish ship, the Mavi Marmara, where the civilians were killed; the paper reported that “There were no immediate accounts available from the passengers of the Turkish ship” because the Israeli base they were taken to “was off limits to the news media and declared a closed military zone.”

According to Craig Murray (5/31/10), former British ambassador and specialist on maritime law, the legal position “is very plain”: “To attack a foreign flagged vessel in international waters is illegal. It is not piracy, as the Israeli vessels carried a military commission. It is rather an act of illegal warfare.”

© 2010 Fairness and Accuracy in Reporting