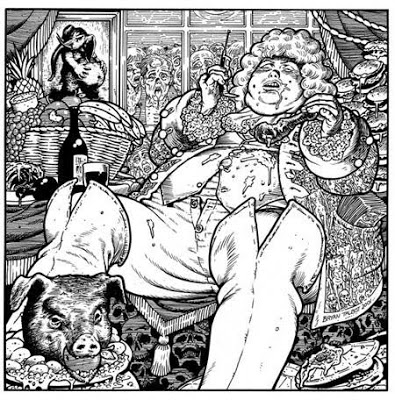 I won’t bore or appall you with the toxic sludge spewing out of the mouths of our CEOs justifying — sans apology — their behaviors, salaries and bonuses. Especially during this week of Haitian horrors.

I will, however, offer you a bedtime story that relates to both. This, a chapter from an unpublished novel, When the Gods Come Home to Roost. George tells it to Demi’s 10-year old daughter, Zoe:

“Zoe, Zoe, puddin an pie,
Tonight, a story that will make you cry…
And though you may eat God knows what
Never again will you eat your snot.”
“I don’t eat my snot, you big bugboo.”
“Oh yes, you do. I saw you. And I saw you pick your head and eat it.”
“Get out.”
“You looked at it, and popped it in your mouth.”
“Get out. Ma, he’s disgusting. Find another one.”
“They’re too hard to come by,” Demi said, and kissed George on the ear. ” Into bed, and the big bad man will tell you a story. I’ll be up as soon as I finish the dishes.”

“Once upon a time, there was a mighty king who scorned the gods. His name was Erysichthon.”
“Erysickthon?”
“You got it.”
“I’ll call him Sickie.”
“And a sickie he was, no tree-hugger he. Sickie once went wild in a sacred grove belonging to Demeter — slashing all the trees with his sword, wounding each of them, lopping off their branches.”
“Why?”
“Good question. Because he was a king and could do what he liked?”
“Because he was a bully,” I think. “The trees couldn’t fight back.”
“Well, we’ll just see about that,” said George. “So he whacked and whacked until he came to a towering oak, centuries old, hung with messages and garlands, the centerpiece of many a dance. It would take a dozen people, holding hands, to circle it.
“But did Sickie care? He ordered his slaves to chop it down, to fell the sacred tree. Not one would do it. So he grabbed the axe himself, raised it up and screamed, ‘This tree may be the goddess’s. This tree may be Demeter herself — too bad!’ and his axe bit hard into the tree’s great body, and it trembled and groaned, and its leaves grew pale, and it started to bleed — red blood.”
“Do trees have blood?”
“Not most of them — and like you, everybody was stunned. Justus, his most beloved servant tried to stop him. His head rolled at Sickie’s feet, and bumped up against the tree. As the murderer turned back to the trunk a voice came from deep in the wood. ‘Hear me now in this hour of my death, Erysichthon, hear me well: You will be punished as no man has ever been.’
“And the oak tree fell, slowly, its huge canopy laying low the trees around. Then all the spirits of the forest went mourning to Demeter, mourning and complaining, complaining and demanding revenge — the monster’s death.
“The lovely goddess nodded, and her nodding caused the fields of grain to tremble. A simple death was too kind an end to such cruel arrogance. Goddess of abundance, she would strangle him in threads through her antipode — the tortured goddess Famine.”
“What’s that — antipode? Like her opposite?”
“You got it. So off Demeter flew on wingèd dragons, over the bleak Caucasus mountains, to the outer rim of icy Scythia, a dismal land where nothing grows, a land of pallid cold and fear. She looked for Famine, her negation, and found her in a stony field, digging her nails into the scrawny grass, and gnawing at its roots. Her hair was matted, her face was pale, her eyes were hollow. A living skeleton she was, with swollen joints and leprous skin.
“’Famine,’ she called, keeping her distance, ‘I must ask of you a favor. Would you be warmed for one night in a royal bed?’ Famine hungrily agreed. She followed behind Demeter’s chariot, blown by the wind, and came to Erysichthon’s palace in the dead of night.
“There he was, asleep. She crawled into the bed, and wrapped her skeleton self around him. She breathed into his ears, her dry tongue searched out the wet corners of his mouth, she warmed her hands between his thighs, and planted hunger deep within him. Then back she flew from the land of harvests to her sterile, fruitless home.”
“This is a yucky story.”
“What do you think will happen?”
“He’ll be hungry all the time?”
“Let’s see. Can you guess what he started dreaming of?”
“Food.”
“Smart girl. He chewed on the air, and ground his teeth, and swallowed, swallowed…”
“Spit.”
“And when he awoke, he was hungrier than he’d ever been.”
“Famished.”
“Ravenous! Unquenchable hunger. He ordered banquets, and at the banquets he dreamed of banquets. He ate enough food to feed his whole town, his entire country, he spent his treasure, and sold off all he owned for food till there was only one thing left to sell.”
“What?”
“His daughter.”
“Why didn’t he eat her?”
“You don’t eat daughters. And she was a very special daughter. Mestra, she was called, and so beautiful that she was loved by the god Poseidon who gave her the gift of changing shape at will. What a business they had — a con game. Sickie would sell her as a slave, and she would turn into a fishing girl. ‘Where’s my slave?’ the sucker would ask. ‘I paid good money for her, and there’s no one here but this fishing girl.’ And then the fishing girl would be sold to another rich chump, and all there was was a milkmaid, or a cow, or a bird.”
“Et cetera, et cetera…”
“You got it, Zoekins. A good scheme, huh? More food for her father — till finally there was no more.”
“Did he starve?”
“Not exactly. He tore apart his own body with his sharp teeth, and ate his shrinking self alive.”
“Did he eat his teeth?”
“No. The teeth were all that were left.”
“Were the teeth hungry?”
“No, they don’t have stomachs.”
“Oh.”
“What do you think the moral of this story is?”
“Don’t eat yourself up.”
“George,” Demi asked, “Why do you tell such stories?” She was standing in the doorway.
“I’m attending to her education.”