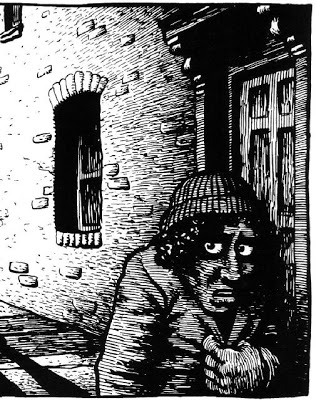 Last week, I wrote about what I consider politically unearned infiltrations supporting rampant consumerism. I will not sing Hallelujah in the mall.

Infiltrations, however, do have real potential for thought-provoking events.

When I was in theater grad school in the 60s, everybody was all hot for Artaud’s Theater of Cruelty, in which the audience was made to shit in its pants, and paradoxically for Brecht’s teaching plays which asked the audience to think cooly and carefully about society’s givens. We young directors were concerned with breaking down barriers between audience and actors — new kinds of staging, new kinds of scripts.

But for me, the prior problem was one of “audience” itself — that there should be people who buy (usually high-priced) tickets, sit comfortably in chairs, applaud, then go out for a meal or a drink to socialize, and perhaps, perhaps, “discuss the play.”

Too compartmentalized, too boxed in, too unengaged with reality.

So I gathered a group interested in practicing Infiltrations — theater pieces which would not be perceived as such, but which would just be reported at home as “something interesting that happened to me today.”

Here are two such Infiltrations to give you an idea of what we were up to, one in an emporium, and one in a smaller store. Next week I will discuss the ethics involved.

Cost Plus and American imperialism

Cost Plus is a mammoth import store on the San Francisco waterfront which caters to tourists and Bay Area bobos by supplying them with hand-wrought goods from around the world — from inexpensive mass-produced trinkets to costly one-of-a-kind curiosities. It is self-help, with no sales personnel on the floor. We began to wonder about the flow of goods that went through the store, and after getting some information from one of the buyers we came up with the following piece.

Five of us, looking as straight as possible, dispersed throughout the store as customer aides. We approach people who were inspecting possible purchases. A typical dialog went like this:

CUSTOMER, generally unsuspicious: No, thank you.

US, waiting a bit, watching over customer’s shoulder: Isn’t it amazing how we can bring you such an intricately carved box for only $4.99?

CUSTOMER: Why, yes it is.

US: Yes. You see, there’s a lot of famine and disease in India, and he has to work for whatever he can get.

US: He has no choice.

US: And since we control the world economy, more or less, we can decide on the right price.

Yes, and you have to realize that what you pay includes the markup for the buyer, the warehouse, the shipper, the import duty, and our own small overhead — so it’s really an incredible bargain.

Thoughtful, non-hostile silence. This was usually a turning point: either the customer began reacting to what we were saying or else we carried it further.

I think it’s right — don’t you — that we in this country should be able to benefit from people’s work around the world? After all, we give them a market. They’d starve without it. And we can have these really nice things. I mean Americans work really hard, right? We have to put up with so much — like the war and everything — we deserve these kind of beautiful things.

People who work hard should be rewarded. Don’t you think so? And the natives? They’re hard workers too, but I mean 25¢ a day is a lot for them, right? Did you know that although we’re only 6% of the world’s population, we consume 60% of its natural resources? That just shows — we’re sort of 10 times ahead of everybody else because were willing to work hard and bring home the bacon.

Etc., etc. Eventually these customers drifted away with an embarrassed “Thank you.” But none of them bought the items they had been looking at.

After an agreed upon two hours, we all met outside the store to trade stories. We were never caught, and the customers, too, would have their stories to tell.

Lawrence Ferlinghetti started the City Lights Bookstore on $500 in the early 50s; it has since become one of the most complete paperback shops in the Bay Area. The store has been busted several times for selling radical or obscene material, and has an open door policy toward its customers: the police are never called.

Once, City Lights was ripped off for $8,000 worth of books and went that much in the hole. This seemed to me like a typical example of Movement bullshit — brothers undoing each other in the name of “liberation” or conflicting ideologies — so we decided to explore our own and the customers’ attitudes toward ripping off City Lights.

During rehearsal, the group rejected playing “roles” in favor of exploring each member’s own position. We lined up pretty heavily for the legitimacy of ripping-off. I was one of the few spokesmen against. But the balance worked out in performance, since most of the customers at least started off by defending the store.

The piece took an hour to an hour and a half to develop (we did it three times) and was done with the cooperation of the management and, as it turned out, at their expense. It’s hard to record the complexities and meanderings of the performances, but the salient points are as follows:

One of us, previously agreed, steals a book, and hides it in his pants. Very quietly, a young woman (one of us) goes up to him and says she doesn’t think he ought to do that here. His very quiet response is “Mind your own business, lady.” Totally private so far.

The woman retreats but keeps her eye on the guy. Some minutes later, he attempts to stash another book, and the exchange begins again, just as quietly. This time the guy is a little more pissed off, and the exchange ends with a little louder than necessary “Fuck off!” For the first time, real customers are aware of tension somewhere in the store.

I wander over and ask the woman what’s happening. She reluctantly and quietly informs me that some guy is trying to rip off books. I approach him very quietly and ask him why doesn’t he do that at Doubleday’s or Brentano’s. He begins to get uneasy and tries to terminate our encounter as quickly as possible, until another one of us, overhearing, supports the thief by asking me,

“Hey, what are you, a cop or something? Let the guy do his thing.”

By now it’s apparent to the thief that things aren’t working out as planned. But on the other hand, he has support, so he doesn’t split. For the first time I chastise the thief publicly.

“Hey man, look, why don’t you go down to Doubleday’s and rip off the book if you need it? Why rip off your brothers?”

“Brothers, my ass! This place is the fucking pig establishment.”

This is the first theme to be taken up — it generally called up a lot of customer support for the store. Other topics for discussion we planted among the 10 to 20 customers are:

Our group, more vocal now than at first, pushes the balance way over to the thief’s side. This helps justify his sticking around. He’s not an outlaw but is acting within the mores of the local population — and this brings an emotional response from the customers. Each time, someone offers to buy him the book or take up a collection. We follow their trips wherever they go.

1 get more and more pissed off with what I consider poor analysis. I station myself on the steps so I can be heard by everyone, wait for a lull, and say to the thief,

“You’re not taking those books.”

“’Cause I’m going upstairs with you and tell Shig [the guy at the desk] you’ve got them.”

A new uproar! Even the customers don’t like it. (There are a few who come over to quietly tell me they agree with me and think I should do it, but no one defends my action publicly.) I am accused of being a pig, of laying my trip on other people, of exceeding my rights.

“What is this, the second grade, you’re gonna tell the teacher?”

I argue briefly that when this man rips off City Lights, he’s ripping me off (I need the store), and that I intend to defend myself. From that time on, I am generally silent, stubbornly waiting for the thief’s exit.

One of us calls for a “rip-in,” and tries to get customers to liberate books together. So far, only our own group has done this publicly, although it’s hard to tell what walks out when we do.

Confrontation at the desk. The first time we did it the day clerk got completely flustered. He had been told what was happening and was asked to act in any way he wanted. He couldn’t get it together, and three people walked out with books. That evening we confronted Shig who, with some kind of invisible karate approach, retrieved two books. A third was grabbed by a customer at the door.

The next night we had a big argument at the desk. Shig surprised us by saying, “Take the books,” and several people did so — to a lot of customers’ anger. Shig just felt that that was his prerogative. That really set off some of the people who had been defending the store for the last hour downstairs.

We still haven’t resolved for ourselves the implications of our positions and actions. We know the piece is credible and sets a lot of people thinking and talking (and stealing?). But when someone in our group presented me with the complete Beethoven string quartets as a present, I had to send Shig a check before I could enjoy it.