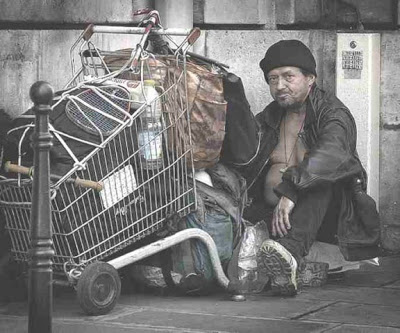 Photo by Eric Pouhier / Wikimedia.
Listening to our local Leiermann:
Night dreams of another life

Every now and then — and again last night — I am awakened at 3 a.m. by the sound of a shopping cart rattling past my house. No voices. Just a lonely, ghostly, shopping cart. It has that eerie sad-ness Woody Guthrie used to sing about — like “that long lonesome train a-whistlin’ down.” Ex-cept it rattles.

The sky is dark, the street lights bright outside my window. All other noise has ceased. Squad cars prowl silently, if at all. Donna is sleeping, and the cats breath quietly at our heads and feet. Wordsworth said it: “The holy time is quiet as a nun/breathless with adoration.” Except there is a shopping cart. Rattling.

Who is out there, pushing? Who is searching the recycle bins and garbage for nickel bottles and cast-off clothing? Who must be up this early in the morning to ensure his meager catch?

In daylight hours I would probably revert to my social/political thought chain: the ghastly state of current American capitalist politics, the ripping away of the safety net from under the free-fall of the poor. But in the middle of the night, my thoughts often go to the amazing end of Schu-bert’s song cycle, Die Winterreise, the Winter Journey.

In the standard frame of nineteenth century romantic poetry, a lover, spurned by his beloved, must “get away” from his memories of her, must avoid the possibility of seeing her with her new husband. He wanders out into the winter, his tears freezing in the icy landscape. He has dreams and nightmares. He longs for mail, though he has no address. He communes with birds and beasts; he hallucinates.

There are many amazing and moving images in these 24 connected songs, but none is more mysterious and compelling than that of the last song, “Der Leiermann,” the Hurdy-Gurdy man. Of all the songs, it is the quietest and simplest, a bare vocal line alternat-ing with a little organ-grinding refrain in the piano.

After all the wildness of nature and passion — this last strange encounter: with an old man out-side a village, playing his music as best he can, his fingers numb, standing near his empty cup, barefoot, on the ice. Nobody listens to the organ-grinder, nobody pays any attention to him — except the dogs, who come — to bark and growl. But the old man just lets it all happen without complaint, grinding out his simple tune, never stopping. Coming upon him, our heart-weary traveler is dumb struck.

We think it is a simple little story, a narration about some striking character met along the path. The first surprise comes in the last verse. Is our sad young man repulsed by the organ grinder, frightened by his situation, thinking “there, but for the grace of God, go I”? No. “Strange old man,” he says to himself, “shall I go with you? Will you grind out music if I sing?” And the sec-ond surprise is — that’s it. That’s the end. The hurdy-gurdy phrase runs it’s course and this in-comparable masterpiece just stops — quietly, with a question, a question leading out into infinity.

As I lie in bed listening to our local Leiermann, his shopping cart singing its sad, repetitive song, I — this person snuggling next to his sleeping wife, nuzzled by his trusting kitties — I want to go out there and join him. I want to experience the emptiness and beauty of the street late at night, the sense of the world stopped around me, the non-hustle and non-bustle and time of my own creation.

I want to give up my deadlines and assignments, my enslavement to the little property I own. I want to simplify my life, and have the basic tasks of my cro-magnon ancestors, to live from day to day, to hunt and gather, to relate to the turning of the sky.

Not to romanticize the brutal life forced on the poor by devil-don’t-care capitalism. My late-night dream does not contain having to figure out where I can poop, or where to get a shower after two weeks without. I don’t have to scrounge for quarters for the laundromat, or worry about my things being stolen while I sleep on someone’s porch to stay dry.

I don’t even have to hang on to my empty bottles and cans — but can give them, a pathetic, inadequate gesture, to those who build their lives around them.

Still, there is freedom out there, late at night. Dream-freedom. We humans have always paid a lot for freedom. At this very moment, somewhere on earth, there is blood being spilled — for free-dom.

1 Response to Marc Estrin : Night Dreams of Another Life