Marc Estrin : Up, Up, and Away 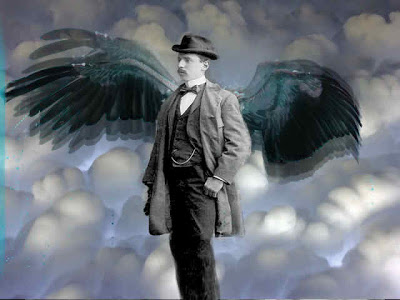 Digital montage image by T.J. Griffin.
Wings over Vermont:
Up, up, and away…

BURLINGTON, Vermont — Though two summers away, an invitation by the mayor to discuss inviting another Burlington air show, “Wings Over Vermont,” has elicited some interesting letters to the Burlington Free Press, the state’s largest paper.

For those outside of Vermont who may not have seen a similar event, such an air show consists of “a blend of high-performance military jets and much more sedate civilian aircraft, such as biplanes.” As the Free Press notes without comment, “The sound impact of jets, generated by the likes of the Blue Angels and other precision flying teams, probably would fill up to two hours of the five-hour program.”

In practice, the show takes place down at Lake Champlain during a crowded day with a July 4th atmosphere. For those not at the event, the cross-overs and low-altitude fly-arounds of the team of “high-performance military jets” is admittedly an auditory trial. Many people leave town while others just gripe.

The virtues or sins of the show are not my subject here. Rather, what interests me is the nature of some of the commentary from the supporters of the show addressing those against.

A most common notion among them is that American freedom to publicly express opinions has been made possible by the existence of the military.

“They are the reason why we all have the freedom to meet,” wrote one. And another: “Your freedoms to express freely your ‘opinions’ have been protected and insured by generations of men and women who proudly served in the military.” (The quotations marks around “opinions” are also interesting.)

To one letter writer, the sound of the jets is “the sound of freedom,” and another asserts that true patriots are “not bothered by the sounds of the people who allow them to live their dream in freedom.”

It seems to me, rather, that the freedom to form and speak our opinions and to freely assemble is not a military issue, but rather a basic gift of the U.S. constitution. If the military is functioning to protect those constitutional rights, you’d never know it as they serve to support administrations in hot pursuit of those rights, dead or alive.

For all the high- and low-tech wonders of flight (it still astounds me to see a huge plane take off), there is a disturbing leitmotif of jingoist war chants among some of the comments:

“There is no better sight in the world than one of those ‘fast movers’ streaking into the battle delivering their payload on top of the enemy,” rhapsodizes one, the enemy, of course, being anyone upon whom a payload is dropped. “Is it noisy? You bet,” writes another. “Does it burn fossil fuel? It sure as heck does. Is it patriotic? You better well believe it.”

Speaking against an anti-show writer, one letter predicts that “When the bad guys from across the pond attack again, he’ll be grateful for our military, but it will be too late.” Concerning his probable reference, 9/11, one may note that our jets — for reasons still unclear — were unable to scramble that day against four errant airliners clearly bent on destruction.

(This has been a week containing a rape by a power-driven, hyper-sexual world leader, and the postponed invitation by a Savior for meeting in the skies with his elect. It is hard for me to avoid sensing a relation of themes here. But I will leave such meta-interpretations to readers so disposed.”)

Perhaps the most disturbing aspect of these freedom-loving comments has been the depiction of those who oppose the air show: “Moonbats,” they are, “whack jobs,” “tree-hugging wing nuts” (these descriptors from different letters). What to do with them? “Progressives and liberals should be MADE to watch the air show. Maybe then they will pack up and leave.”

And a warning: “If you don’t stand behind our troops, PLEASE feel free to stand in front of them.”

The vibes are chilling.

[Marc Estrin is a writer, activist, and cellist, living in Burlington, Vermont. His novels, Insect Dreams, The Half Life of Gregor Samsa, The Education of Arnold Hitler, Golem Song, and The Lamentations of Julius Marantz have won critical acclaim. His memoir, Rehearsing With Gods: Photographs and Essays on the Bread & Puppet Theater (with Ron Simon, photographer) won a 2004 theater book of the year award. He is currently working on a novel about the dead Tchaikovsky. Read more articles by Marc Estrin on The Rag Blog.]