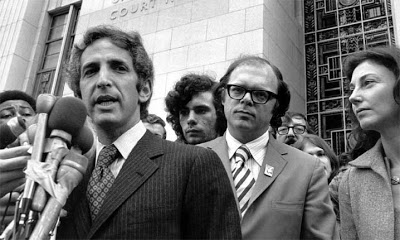 Daniel Ellsberg speaks to reporters outside the Federal Building in Los Angeles on Jan. 17, 1973. Ellsberg’s co-defendant, Anthony Russo is at center right. Photo by AP.
Five reasons to remember
the Pentagon Papers

Call it the granddaddy of WikiLeaks. Four decades ago, a young defense analyst leaked a top-secret study packed with damaging revelations about America’s conduct of the Vietnam War.
[….]
The National Archives released the Pentagon Papers in full Monday and put them online, long after most of the secrets spilled. The release was timed 40 years to the day after The New York Times published the first in its series of stories about the findings, on June 13, 1971, prompting President Richard Nixon to try to suppress publication and crush anyone in government who dared to spill confidences.

Prepared near the end of Johnson’s term by Defense Department and private analysts, the report was leaked primarily by one of them, Daniel Ellsberg, in a brash act of defiance that stands as one of the most dramatic episodes of whistleblowing in U.S. history.

HAVANA — Daniel Ellsberg served in the Pentagon under then Secretary of Defense Robert McNamara. Ellsberg had been on duty on the evening of the Gulf of Tonkin incident, reporting the incident to McNamara.

For those of you who are rusty on U.S./world history, the Gulf of Tonkin incident served as President Johnson’s legal justification for deploying U.S. conventional forces and for the commencement of open warfare against North Vietnam.

When Daniel Ellsberg, back in 1969, photocopied classified documents from the Pentagon to which he had access, he did so because he was disenchanted with the war his government was pulling his country deeper into; he felt he had to do something to stop the lying and protect the lives of so many that would be lost in the end.

The government of course wanted Ellsberg tried and convicted, but due to gross governmental misconduct and illegal evidence-gathering, and the defense work of Leonard Boudin and Harvard Law School professor Charles Nesson, charges against Ellsberg were dropped.

After his trail ended Ellsberg learned that there had been a plan by the CIA to drug him with LSD and have him appear completely incoherent in front of a mass audience. This “Ellsberg neutralization proposal” originated with Howard Hunt and was recounted in G. Gordon Liddy’s autobiography.

Now here comes the punch line of my rant: who did the CIA have on board to carry out this fiendish act? Well, turns out it was 12 Cuban-Americans no less! Ha! We’re everywhere! The good ones and the bad ones! I leave it to readers to decide which are which. 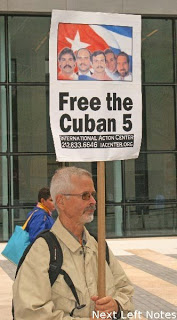 But as fate or karma would have it, it turns out that the lawyers who defended Ellsberg in one of the most important and decisive trials in U.S. history included a young fresh-out-of-law school attorney who also had the first name of Leonard.

Leonard Weinglass had already garnered a name for himself during the trial of the Chicago 8. But little did Lenny know during the trials of Tom Hayden and Daniel Ellsberg that Cubans would be following him till his dying day.

Weinglass’ last case, his last battle against the same windmills of gross governmental misconduct, involved five Cubans unjustly imprisoned in the U.S. for divulging information to Cuba and the United States on terrorist activities against their Cuban homeland — and against all those in the U.S., Cuba, and everywhere else, who wanted to see normal relations between our two countries.

So now, 40 years after The New York Times began publishing the Pentagon Papers — which helped lead to the end of the war in Vietnam — wouldn’t it be great if another truth came to light and President Obama, with or without the help of The New York Times, freed the Cuban 5 and, in doing so, took the next step towards ending the U.S.-Cuba conflict?

[Margarita Alarcón Perea was born in Havana, Cuba, and raised in New York City. She studied at Karl Marx Stadt in East Germany and Havana, and is a graduate of Havana University in linguistics. She has taught English translation and North American twentieth century literature, and worked in the Cuban music industry. She is currently a news analyst for Cubadebate in Havana and contributes to The Rag Blog and The Huffington Post. Maggie’s father is Ricardo Alarcón, president of the Cuban National Assembly. Read more articles by Margarita Alarcón on The Rag Blog.]