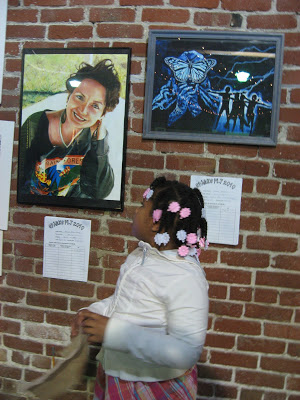 DALLAS — On Monday, August 9, 2010, I had the honor of speaking at what I believe was the first of many memorials honoring Marilyn Buck.

Marilyn, the long-time political prisoner, acclaimed poet, former Austin activist, and my friend who passed away on August 3rd, a victim of uterine cancer, 19 days after being paroled from federal prison, was aware of my planned speech before her death, and told friends that she wanted to hear a tape of it. I joked with attendees at “Free ‘Em All!” — the first public event in this year’s Black August celebration in Dallas — that she must have wanted to check up on what I’d say about her!

In truth, Marilyn would have been more interested in what’s going on in Dallas these days, and in who attended this meeting, than in my rather scattered remarks. Not knowing what to expect when I accepted the invitation to speak, even before Marilyn’s July 15 release, I found myself in the midst of a young, vibrant, committed community of eager activists.

When we arrived at about 6 p.m. and started getting ready — putting programs in the comfortable seats, setting up a book table in the hall –- someone started playing a DVD about rapper Tupac Shakur; I would like to see this whole thing! Assata Shakur, freed from prison by Marilyn Buck and others, was Tupac’s aunt.

About 50 folks were present for an informative and entertaining program. (Latecomers, stuck in traffic or delayed by stifling heat, came in well after the 6:30 start time.) My hostess, Satori Ananda, a non-stop mother of three and poet-activist, opened with a brief welcome and summary of the agenda, then read Marilyn’s poem, Black August.

Comrade Erick made a brief presentation on the history of Black August, established after Black Panther Party leader, theorist, and author George Jackson was slain in California’s Soledad prison on August 21, 1971.

I hadn’t realized it had been so long ago — almost 40 years — but this short presentation brought the events back to me, and were even familiar to many in the youthful audience. Many freedom fighters, it turns out, have died or faced some great trial in the month of August; yet there are events to be celebrated as well.

Black August is an occasion to learn about such fighters, and remember their lives. In Dallas, four presentations are taking place, as well as a month-long PLC program of political education, physical exercise, and, for some participants, fasting or dietary cleansing.

The final event will feature two members of the Africa family, whose story, along with that of their organization, MOVE, is crucial to understanding the story of acclaimed journalist Mumia Abu-Jamal, who sits today on death row in Pennsylvania. 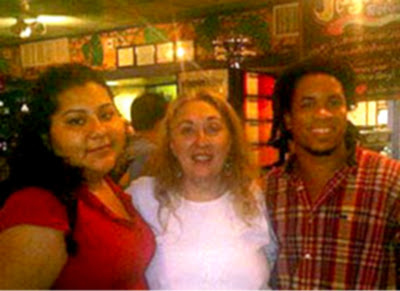 Cassandra Guerra, Mariann Wizard, and Charles Goodson celebrate life of Marilyn Buck in Dallas. Photo by Satori Ananda.
Cassandra Guerra, a second-generation Brown Beret activist, spoke about some current political struggles in Dallas, informing those present of upcoming meetings and actions. The knowledge and assurance of all these young speakers and leaders was impressive.

An “edutainment” portion was presented by the Black Chamber Movement, two young hip-hop poets, Sam-U-Ill and Pihon, who each performed totally off-the-hook poems covering history, current events, and future developments with ease. I could have sworn that these young men were both Dallas born and reared, and was amazed to learn that both are actually African African-Americans!

I was next, with a 40-minute speech that was, I fear, all over the place; I rewrote it three times as events unfolded with Marilyn’s release and passing, while I was also reporting these events here on The Rag Blog and at NOKOA The Observer.

It’s hard to summarize the life of a person you’ve known for 44 years in 40 minutes. It’s hard to detail anyone’s political and personal journey, and relevance for today, in 40 minutes. I tried to do it all, digressing from my carefully-scripted remarks more than once. I read from my poetry, her poetry, and her little-known essay on the practice of meditation that appeared in Tricycle, a Buddhist publication, in 2004, one of the most self-revealing of Buck’s works.

I ended by talking about the defective health care system found in every county jail, and state or federal prison in the world, except for those that may be staffed by well-funded saints. This was an issue close to Marilyn’s heart long before she experienced the first symptoms of the cancer that would claim her, and one many of her supporters will continue to champion. Marilyn’s highly committed legal counsel and extensive network of supporters may have insured better care for her than many prisoners experience, but her concern was always with the powerless.

Past my planned endpoint, I think I won my listeners’ hearts for myself as well as Marilyn with a spontaneously voiced theory about the crucial role of rock’n’roll in revolutionary unity, and a quote from Port Arthur rappers Underground Kings, first asking, “Do y’all listen to UGK?” This is pronounced, for those of you who don’t know (now you know), “oo-gee-kay,” and for some reason the fact that I know this brought down the house. The quote? Not fatalistic, but merely factual, words to live well by: “One day you’re here, and then you’re gone.”

After some lively Q&A, the program resumed with gardening information from Eka, a beautiful dark-brown woman with curlicue locks; I learned later she is a teacher, and would say, from my brief exposure, that she must be a very good one! PLC is working on sustainable organic gardens, to be maintained and shared in by community residents. The Dallas City Council, in response to an evident public desire for more healthy, less expensive produce, is considering new regulations, permits, and fees for community gardens! Attendees were urged to express themselves at an upcoming Council meeting.

Seidah, with colorful locks topping her turban, spoke briefly towards the end of the meeting, reminding everyone of upcoming events, thanking me for coming, and expressing her desire to know even more about Marilyn Buck. She mentioned other political prisoners who need our support.

Later, Satori and her family took me to eat at the Café Brasil, where we were joined by some of those who had attended the meeting and others whose work had caused them to miss it; all were eager to hear more about Marilyn’s life. I moved around our three tables to try to visit with everyone.

Personable Charles Goodson had lots of thoughtful questions. Satori’s daughter and her friend, sitting at the merchandise table in the PAC hallway, hadn’t been able to hear my speech, so I asked if they would like to have the written version; the 16-year-olds responded with actual enthusiasm. Poet Abstrakt and I hit it off right away; this is someone still growing, already with a story to tell!

I was really impressed with the intergenerational acceptance and ease within this group. Satori’s youngest son is already a leader and an avid reader, and not even a pre-teen yet! This is what comes of treating children like thinking, responsible creatures!

The experience left me even more convinced that Marilyn Buck’s real work among us is only now starting, as hundreds of friends and admirers around the world, and those who are hearing about her for the first time, reach out to each other to share memories and discuss her evolution as an activist and human being. A number of creative projects may be in the offing, including, if we are lucky, a collection of Buck’s previously unpublished poems.

Although she clearly wasn’t perfect, Marilyn remained true to her principles and gave herself wholeheartedly to representing them through her poetry, her friendships, her endless networking, and her personal struggles, as well as her overtly political statements. As a result, her presence was clearly felt at this Dallas gathering.

One, Two, Three, Many Marilyn Bucks! 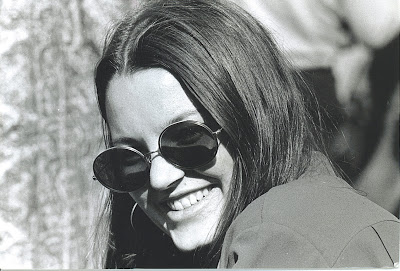 Would you hang on a cliff’s edge
sword-sharp, slashing fingers
while jackboot screws stomp heels
on peeled-flesh bones
and laugh
“let go! die, damn you, die!”
could you hang on 20 years, 30 years?