Mariann Wizard : ‘Palin Will Go Down in Flames’ 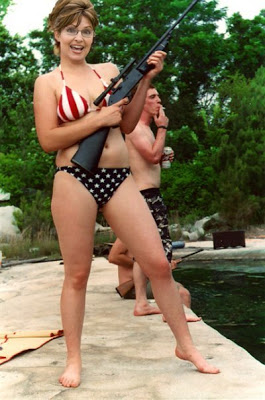 Yeah. Yeah. We know this image is probably photoshopped. And?
Palin Implosion Inevitable
By Mariann Wizard / The Rag Blog / September 9, 2008

As even more evidence comes to light of Gov. Sarah Palin’s anti-scientific, anti-feminist, and anti-democratic views, I am reminded of the classic “time travel” paradoxes: either the time traveler imperils her/his present existence by tinkering with the past conditions which produced life as s/he knows it; or meets her/his past self, triggering an encounter between matter and anti-matter in which the contradictory selves implode.

I predict a similar fate for Palin’s candidacy, and, if she is not careful, for her political future even in Alaska.

Palin’s career has clearly benefited from the feminist movement of the late 20th century. She would never have been elected mayor of Wasilla, much less Governor of Alaska, without the issues raised, and struggles waged, by the women’s liberation movement. Paramount among those struggles, and reaching back to our Suffragette foremothers, a uniting principle of feminism has been the right of women to control their own reproductive organs, by any means necessary. Yet Palin embraces a patriarchal view in which abortion should not be allowed even following rape or incest — two criminal acts that are, by the way, epidemic in Alaska! In Palin’s vision, information, including birth control and human sexuality information, would be subject to censorship. Abstinence would be the birth control method “of choice”, a position no longer held by anyone, especially not by educators, outside of a religious minority which believes it their responsibility to further overpopulate the world in order to hasten its end!

Lack of safe, reliable, effective birth control methods and prohibition of abortion are important factors in keeping women housebound — and political nonentities — when economies have less room for women in the workplace. But especially in our faltering economy, work is not an “option” for most mothers, or for most women, married, single, and/or childless; it is a necessity. Whether gutting fish in a ‘factory ship or plucking chickens in Georgia, running for political office or running a business office, American women can’t go back to a fantasy past of stay-at-home Moms, raising 6 kids with a just kitchen garden and a gutting knife. There is no “there” to go.

While Palin’s nomination is a cynical attempt to manipulate feminists disappointed by Hillary Clinton’s exclusion from the Democratic ticket — and, more importantly, white women looking for any reason not to vote for Obama, the “racist feminist” contingent — the idea of electing a women to one of the two highest offices in the land still exerts strong feminist appeal. Until one of our daughters really does grow up to be “anything she wants to be” — more than one, I’d say; until it becomes routine for the US to have female heads of state, as it is in Europe and even Africa — this is a goal unmet, tantalizing in its elusiveness, still something to strive for. But the Executive, for all its vaunted power, is a figurehead. This goal is not worth casting away the victories that have been won, and are in too many instances today very precariously held, as in reproductive freedom; it is not worth casting away the opportunity to make significant gains in other yet-unrealized goals of critical importance to women, as in health care, childcare, Social Security, and equal pay for equal work.

In Sarah Palin’s vision, the conditions necessary for her rise to power — or any woman’s — would not exist. She thinks she’s Governor because she’s “special” — perhaps one of the Elect, as well as the elected. American women know better. We know that every woman has a story different from every man who ever stood for election. We know that every woman is special, but no woman succeeds alone. (We’ve licked the envelopes and made the coffee in enough campaigns to know that the candidate doesn’t do all the work.) We know that Sisterhood is powerful, and we need to turn that power now onto scrutinizing this nomination, and exposing it for a fraud, and John McCain’s election as unacceptable.

In all probability, Palin’s selection by the Republican Party is an admission that they don’t expect to win in November — although they hope for some freak occurrence, like this novelty selection, to make voters disgusted with eight years of Republican rule think that voting Republican will bring change. Rather than waste the time and credibility of a more valuable team player (read: party hack) like Romney, Hutchison, or even Huckabee, on a losing effort, they’ve put forward a “rising star”. She is not well-liked by the Alaskan Republican establishment, however; she exposed some of their more blatant corrupt dealings and defeated a sitting Republican governor in whom they had a long-term investment. If she does well for McCain, she may survive the experience, win or lose. But if she does poorly, she’s expendable; she is, after all, only a woman. In my opinion, when the implicit feminism of her candidacy meets the explicit anti-feminism of her positions, Palin will go down in flames.

This entry was posted in Rag Bloggers and tagged PresidentialCampaign, Sarah Palin. Bookmark the permalink.

3 Responses to Mariann Wizard : ‘Palin Will Go Down in Flames’