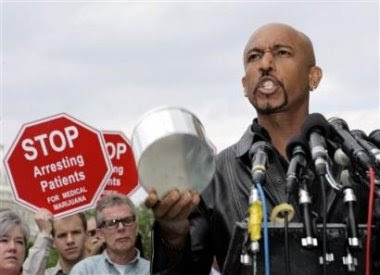 Talk show host Montel Williams is shown speaking out in support of legalization of marijuana for medical uses. Williams has described his need for medical marijuana to deal with the pain associated with multiple sclerosis.

Marijuana-related measures on various ballots around the country did fairly well in last Tuesday’s elections.

In Massachusetts, a landmark initiative to decriminalize marijuana passed 65% to 35%, removing the threat of arrest for possession of an ounce or less of marijuana, and replacing jail time with a $100 fine, payable through the mail. This is the first time that voters anywhere have passed a statewide decrim initiative! Also in MA, four state House districts passed nonbinding public policy questions directing their representatives to vote for legislation allowing seriously ill patients to use cannabis, with the approval of their doctors.

In California, a measure that would have cut public housing benefits for those convicted of recent drug offenses, increased prison and law enforcement spending, and raised penalties for gang-related activities and other crimes, lost 70% to 30%. However, another measure that would have diverted more drug offenders from prison into treatment and improved the marijuana decrim law enacted by CA’s lege in 1975 went down to defeat, 60% to 40%. Meanwhile, in Berkeley, a measure to expand non-residential zones where medical marijuana dispensaries can locate, issue zoning certificates, and bring the city’s marijuana possession limits into line with recent court rulings passed, 62% to 38%.

Fayetteville, Arkansas and Hawaii County, Hawaii passed measures making adult marijuana offenses the lowest priority for local law enforcement, 66% to 34% in AR and 53% to 39% in HI.