Marilyn Buck from the Greybar : Reflections on Liberation and Poetry 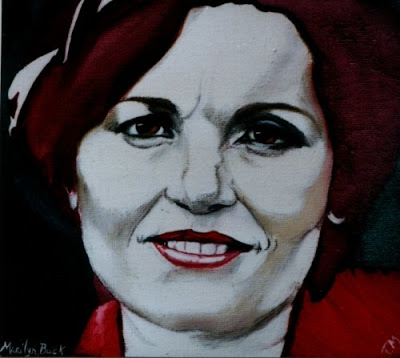 Portrait of Marilyn Buck by Tom Manning from Can’t Jail the Spirit: Art by Political Prisoner Tom Manning and others, 2006.

The following is from former Austinite and Ragamuffin (contributor to our Sixties underground paper), long-time political prisoner and poet Marilyn Buck, the latest of her continuing letters to a legion of friends and supporters hopefully awaiting her release, perhaps in 2010.

Her informal reflections on current events provide an important perspective too often missing from our debates. Far removed, as yet, from the world of blogs and tweets, Buck is forced to observe events unfold on their terms, and to objectively weigh their relative importance.

You can see Marilyn’s work on The Rag Authors’ Page.

‘Already it’s May! National Poetry Month in April, celebrated poetry in… more public quarters. I think of prisoners buried in dark cells (maybe not so dark, but bleak without signs of spring and nature).’

My legs are tied with a rope
and my arms are bound by my side,
but I smell the sweet perfume of woodland flowers
and hear the birds. Impossible
to keep these from me.
Anyhow, now the road is not so long,
and I am not alone.

I didn’t quite get to an International Women’s day/month letter, but as always my spirit is renewed through the evidences of our ongoing struggle for equality as human beings.

My spirits were not renewed at all on learning Uncle Sam’s lackey in Afghanistan signed a law legalizing men’s right — at least in the Shia communities — to forcibly have sex with their wives, turning anti-women culture tradition into modern law. A few giant steps backward for women, everywhere. And then there’s Nicaragua’s and Uruguay’s presidents, D. Ortega and Tabaré, ostensibly “progressive, former leftists,” signed laws further criminalizing abortion and women’s right to choose.

Let us see how the other progressing nations of Latin America develop programs that do or do not benefit more than half of their populations, the women. If a politic or struggle does not work to liberate the women of the country, the country will not be able to advance very far. Not a good sign for anyone, woman or man, especially among those who advocate for justice and liberation.

Nor is it a good sign that our brother Mumia Abu Jamal’s Supreme Court petition was denied. I hope more strategies will emerge to free our comrade. It continues to be dangerous to give voice to the voiceless, especially when the voice and militancy is African.

Already it’s May! National Poetry Month in April, celebrated poetry in [….] more public quarters. I think of prisoners buried in dark cells (maybe not so dark, but bleak without signs of spring and nature). Even though at times it may seem frivolous, excessive, not serious enough for these times in which we live, poetry… is important for the famished spirit. Spring, with its bursting of flowers, greenery and new life gladdens our hearts, despite the dying, torture and brutality that generates poetry of war, incredible loss and anguish.

Many of us like to think of poets as artists-advocates of progress or justice. I am reminded of the Fascist poets, and, recently I read a short essay by Slavoj Žižek , “The Military Poetic Complex” which reminds us of the role of Randovan Karadzic, a poet/psychiatrist/leader in ethnic cleansing and the torturous dismemberment of Yugoslavia. Žižek reminds us that poetry can advocate for the worst of human behaviors.

As for my own poetry, I’ve not been writing much. Nevertheless, recently a graduate music student (now university teacher) in Texas, Lauren Morgan, used three of my poems as the lyrics for a post-modern musical suite, performed in early April in San Marcos, Texas and sung by an operatic-level soprano. She won a competition for her composition! Finally, [my] translation of [exiled Uruguayan poet Cristina Peri Rossi’s] State of Exile was a finalist in the Northern California Book Awards. It was quite a surprise!

May you be well. Spring calls us to renew our energies and to generate collective work towards possibilities of liberation, justice and peace.

[Marilyn J. Buck was an activist in Austin, Texas in the late Sixties. She was a staffer on The Rag, the underground newspaper that was The Rag Blog’s inspiration. She is also a former editor of the original SDS’ New Left Notes, former member of San Francisco’s movement film project Newsreel, an accomplished poet, and a literacy and AIDS prevention educator. She is one of the longest-held woman political prisoners in the US today. To learn more about Marilyn’s history, her incarceration and her creative work, go to her entry on The Rag Authors’ Page.]

Also see Marilyn Buck from the Greybar: Thoughts on the Recent Election, by Marilyn Buck / The Rag Blog / Dec. 28, 2008

2 Responses to Marilyn Buck from the Greybar : Reflections on Liberation and Poetry