Marilyn Katz :
It’s time to speak out for Gaza

Why have American politicians and editorial boards been silent in the face of extreme violence? 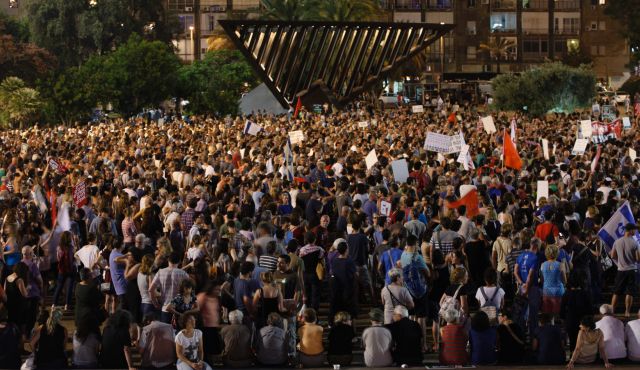 The latest seven-week war in Gaza is over. More than 2,000 people are dead — most of them civilians, 500 of them children. At least 10,000 people have been injured, and 500,000 are homeless. Yet there have been few words of criticism from our nation’s editorial boards or political leadership for these reprehensible, tragic events.

What has happened to us? Where is our sense of outrage at the deaths of thousands of innocents that we show when a single American, 200 airline passengers, or three Israeli youths are killed?

Is it the assumed moral superiority of the perpetrators? Yes, as our mainstream media heads, and elected officials have said, “Israel has a right to defend itself,” but at what cost, in what manner, and to what end?

The label of Palestinian forces as “terrorists” may act as an easy excuse for why our officials and media higher-ups have refused to empathize with those in Gaza. But terrorism is a funny term, often used by those with state power to describe those without it. Although the word itself wasn’t in modern usage until the 19th century, the British likely would have referred to Americans as such in 1776, as would have the Confederacy to abolitionists and John Brown, or the Soviets to Polish freedom fighters.

Israel itself is not without its own history of terrorism.

And Israel itself is not without its own history of terrorism, for that matter. More recently, two men who later would become Prime Ministers of Israel — Menachem Begin and Yitzhak Shamir — were denounced as terrorists for the assassinations of British officers and troops and their dynamiting of the King David Hotel, which killed 91 people, including hotel employees and civil servants.

It might be useful to remember, too, that though Israel may refer to Hamas as a terrorist organization, it was also the elected government of Gaza in 2006 and formed a unity government with Fatah earlier this year. For that matter, it is an organization whose initial growth and development was encouraged by the Israelis as a means of countering and undermining Yasser Arafat and his secular-leaning Palestine Liberation Organization.

Even without such context, however, our nation’s moral outrage has been ignited before by the actions of a government, even when it claimed self-defense against those it defined as terrorists.

Take, for example, the Sharpeville Massacre of 1960, in which the South African government claimed that its killing of 69 demonstrators was a necessary defense against the terrorist activities of Nelson Mandela’s African National Congress and the Pan African Congress. Rather than simply accept the explanation, other countries — including the United States — investigated the underlying issues, eventually opening the world’s many eyes to the injustice and unsustainability of South Africa’s apartheid system.

We in America even found it possible and necessary to condemn our own nation’s actions, when U.S. troops in Vietnam slaughtered a whole village — My Lai — in retribution for its harboring of our then-enemies, the “terrorist” Viet Cong.

Yet in this case, our leaders and huge swathes of the public seem content to take Israel’s side without the same commitment to the entire narrative. This week’s New Yorker suggests another scenario: that the reticence to show outrage might be the result of the strength of the Israeli lobby in the United States.

It would be a mistake to assume that all Jews support the war on Gaza.

Its theory has some merit. It is true that unlike the situation in South Africa — or, more recently, in Ukraine, Russia, or Myanmar — there are millions of Jewish voters, whose sensibilities politicians and perhaps even media outlets fear offending. It would be a mistake, however, to assume that all Jews support the war on Gaza, Netanyahu’s policies, or the continuation of Israeli occupation. Many recurring opinion polls in the United States and Israel show that a vast majority of citizens of both countries support an independent state for Palestine.

Even beyond the poll data, too, there is action. In recent weeks, Israelis’ ability to fight Netanyahu’s policies has been threatened by the Israeli government, which has placed travel restrictions on demonstratins, journalists, and human rights groups in addition to expelling members of the Knesset who disagree with its current policies. Right-wing groups, too, have attacked peace demonstrations and leaders. Even so, last week, an anti-war protest attracted 10,000 supporters in Tel Aviv — and more actions are surely to follow.

In the United States, there is similar, perhaps even stronger criticism. Last week more than 300 Holocaust survivors and their descendants living in the United States placed an ad in The New York Times vilifying the recent violence.

“As Jewish survivors and descendants of survivors and victims of the Nazi genocide,” the ad read, “we unequivocally condemn the massacre of Palestinians in Gaza and the ongoing occupation and colonization of historic Palestine.”

That same week, hundreds of Israelis living in the United States published an open letter further denouncing the Israeli actions in Gaza as dangerous both to peace in the Middle East and to democracy in Israel.

I was raised on Jewish values honed in the diaspora: that it is my responsibility to make the world a better place.

There is a growing group of American Jews who believe that while Israel needs and deserves to exist as a “homeland for the Jewish people,” the actions of the Netanyahu government imperil the “project in democracy” that was the promise of the enterprise. As a Jew myself, I was raised on Jewish values honed in the diaspora: that it is my responsibility to make the world a better place. I took the lessons I learned from Holocaust survivors as a mandate to fight for justice for all, regardless of their country of origin.

If those virtues of the Israelites disappear, what is left to support? It is time for the rest of us to speak out, and to demand that our elected officials and media representatives do the same. Our silence, and our leaders’, is only allowing Netanyahu’s violence to continue unchecked. The Israeli government must learn that we will hold it accountable, no matter what narrative it chooses to justify its actions.

One thing is certain: no military solution will end the Israeli-Palestinian conflict. Only by stopping the 47-year Israeli occupation of Gaza and the West Bank can we hope for an end to this seemingly ceaseless war. For, as so many Jews and non-Jews alike have said and continue to believe, “Without justice, there will be no peace.”

[Marilyn Katz, an anti-war and civil rights organizer during the Vietnam War, has founded and led groups like the Chicago Women’s Union, Reproductive Rights National Network, and Chicago Women Organized for Reproductive Choice in the 1960s and 1970s, and Chicagoans Against War in Iraq in 2002. The founder and president of Chicago-based MK Communications, Katz can be contacted at mkatz@mkcpr.com. Read more articles by Marilyn Katz on The Rag Blog.]

1 Response to Marilyn Katz :
It’s time to speak out for Gaza