Marilyn Katz : Our Bodies, Their Politics 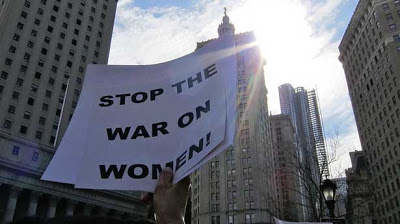 Image from The Raw Story.
Our bodies, their politics

The last few months have made abundantly clear what women must do: rid America’s capitols of misogynists.

In the first half of 2011, close to 1,000 measures related to reproductive health and rights were introduced into state legislatures.

The first “women’s group” that I was involved in was not born out of feminist theory or organized by intellectual women on campus. Rather it was in 1966 in Chicago’s Uptown neighborhood, and its members were poor African-American moms on welfare and thirtysomething (looking 50) Appalachian women, newly arrived from Kentucky and West Virginia.

Not much older than me, many of the women in the group provided physical testament to the possible effects of multiple childbirths while young and poor. The work of the group ranged from food co-ops to welfare reform, from rent strikes to learning to read.

The impetus for the group, however, was a clear-eyed view that welfare was a “women’s issue,” and the need — among the Appalachian women in particular — for protection and camaraderie in the face of their husbands’ explosive anger upon learning that “their” women were seeking information about birth control from government VISTA volunteers.

Back then the outraged cry from men was not about “religious freedom,” but about male prerogative and the duties of women.

I have been reminded of those meetings in recent months by the series of controversies surrounding the contraception mandate in the federal healthcare reform law — from the exclusion of Sandra Fluke’s testimony at congressional hearings (GOP Rep. Joe Walsh said the birth control debate is “not about women”) to Rush Limbaugh’s virulent rant (and limp apology), to the barely audible denouncements of his statement by the Republican presidential candidates.

Contrary to the posturing of politicians and bishops alike, religious freedom is not the core issue. Consider, for example, the Catholic hospitals, schools and universities that have, for many years and with little fuss, provided insurance that covers birth control in the states that require them to do so.

The reality is, as it was 40 years ago in Uptown, that the debate about birth control is firstly and fundamentally about women — their rights and their lives. From Biblical times on, women — who bear the brunt as well as the joy of childbearing — have struggled to curtail unwanted pregnancies, often resorting to extreme measures in the face of possible death or the poverty that another child might bring.

More than 500,000 women die around the world each year from pregnancy-related causes, according to the World Health Organization. A majority of those deaths occur in developing countries, but only a century ago American women faced similar fates.

It was not until the 20th century that pregnancy-related death rates in the United States declined — a result of modern medicine, better sanitation and the advent of modern female contraception. According to a 2011 study, more than 99 percent of “sexually experienced” American women, including 98 percent of such Catholic women, use or have used non-natural (i.e., not abstinence or the “rhythm method”) birth control.

In the past year, as elected Tea Partiers have aligned themselves with religious fundamentalists, Republicans in the House have introduced eight anti-choice bills, each of which received the support of the same 225 GOP representatives. In the first half of 2011, close to 1,000 measures related to reproductive health and rights — from those curtailing contraception to those mandating transvaginal ultrasounds — were introduced into state legislatures.

Of the 28 states controlled by Republicans, 26 have passed laws that limit women’s reproductive choices. According to the Guttmacher Institute, 55 percent of American women of reproductive age lived in states characterized as “hostile” to abortion in 2011 — up from 31 percent in 2000.

The danger is to women, but among us also lies the remedy. Perhaps we owe a debt of gratitude to the Limbaughs of the world — they have brought to public view and hopefully to public attention the attack on women’s reproductive health and rights that has been steadily building over the past years.

And while it would be uplifting to get Limbaugh off the air, the real task is ridding our nation’s legislative bodies of misogynists. Women fought for and won a great deal in the last century. It’s time to say on the Web, in the streets, and of most importance and effect, in the ballot box: We’re not going back.