Marilyn Katz : We Built It — But Not Alone 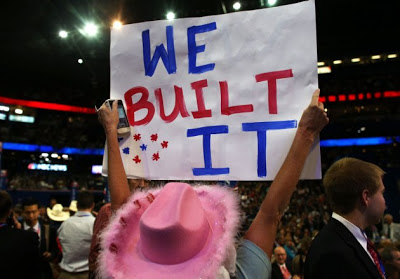 …with a little help from our friends. Photo by Spencer Platt / Getty Images.
But not alone:
Yes, GOP, ‘We built it’

[As the Democrats kick off their convention in Charlotte, Marilyn Katz addresses a major theme of last week’s Republican gathering in Tampa.]

Campaign rhetoric is to be expected, but let’s not let it cloud our minds. The partnership of American business and government has been a good one, in which personal ingenuity is allowed full realization by public investment in education, roads, bridges, research, and technology.

Listening to the RNC rhetoric, I thought: I could be the poster child for the “We Built It” theme. Without inherited wealth, without financial banking, I founded a small business in 1984 on my wits alone that I have run continuously and successfully for the past 28 years.

The Republicans appear to think so, too, as they call me at least once a month asking for money and spouting some screed about Obama’s secret Muslim plot.

However, like Chris Christie’s, my momma always told me to face the truth, and the truth is that I — like everyone else in this country — am not the sole author of my accomplishments.

My business depends on my reading, writing, and thinking skills, all of which I gained in public schools — schools fought for by our forefathers and mothers to ensure an informed electorate that could counter the sway and privilege of inherited wealth. It’s true that my parents paid for my education at private colleges, but my brother was — and I could have been — educated at one of the many public state and land universities that, for most of the 20th century, ensured that America was one of the most educated nations in the world.

My initial and current employees were also educated not at my expense, but by the public. Most attended public schools throughout their educational lives, from kindergarten through college, and many relied on publicly financed loans to afford further higher education.

I set up shop relying on the publicly-financed and -constructed U.S. mail system and telephone grid to communicate with clients. And when my business was revolutionized by computers and then by the Internet, it was the government investment in military and intelligence research to which I owed my gratitude. My business benefits from the public roads and bridges on which I drive. I rely on the publicly financed Federal Aviation Administration to ensure that the planes on which I fly, fly safely. I have never taken any of this for granted.

When I was in college, it was often implied that inhabitants of the “third world” (i.e. Latin America, the Middle East, Africa) lacked the drive of Europeans or Americans. I’ve lived in Latin America and visited many other regions of the Global South, and in none did I witness innovation and social mobility being stymied by a lack of creativity or drive; rather economies and people were impeded by the lack of infrastructure and education.

It is the public infrastructure that supports entrepreneurship, that supports social mobility, that drew our forefathers here from foreign lands (and yes, that is true of all of us except Native Americans), and that continues to draw the most entrepreneurial folks — documented or undocumented — from across the world today.

Campaign rhetoric is to be expected, but let’s not let it cloud our minds. The partnership of American business and government has been a good one, in which personal ingenuity is allowed full realization by public investment in education, roads, bridges, research, and technology. Our tax dollars for education, for health care, for infrastructure, are not charity or extortion; they are the foundation of our collective wealth.

Yes, “We Built It.” But the “we” in this case is not just we entrepreneurs, but the “We” who together constitute these United States.