Marilyn Katz : What Every Woman Should Know (About Paul Ryan) 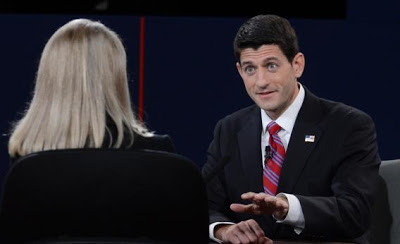 Rep. Paul Ryan faces moderator Martha Raddatz in the vice presidential debate. Photo by Saul Loeb / AFP / GettyImages.
One sure thing:
What every woman should know

Paul Ryan has voted 59 times to support legislation that ranges from declaring a fetus a human being with full legal rights to allowing hospitals to refuse treatment to a woman needing post-abortion care — even if she will die without it.

Paul Ryan offered few details on most issues of domestic and foreign policy in his debate with Vice President Biden, but there was one on which he had both a clear position and a clear path: women’s ability to control their pregnancies.

While women had mostly feared the advent of a Ryan/Romney SupremeCourt that might overturn Roe v. Wade, Ryan let the nation know that his administration would also pursue a congressional strategy to outlaw abortion as well as end federal funding for contraception (already outlawed for abortion) and, by overturning Obamacare, eliminate the guaranteed insurance coverage of contraception and other reproductive health services.

This actually should come as no surprise as, while Ryan would like to be known these days for his economic policies, the only issue on which he has consistently put forward bills in Congress is that of reproductive choice. According to The Progressive, “Of the 81 bills Ryan has sponsored or co-sponsored in this congressional session, only three have dealt with the economy,” while 10 have as their aim the control of women’s bodies.

In fact, his position during the debate was somewhat moderate as, during his 13 years in Congress, Ryan has voted 59 times to support legislation that ranges from declaring a fetus a human being with full legal rights to allowing hospitals to refuse treatment to a woman needing post-abortion care — even if she will die without it.

Ryan is not alone — his bills are the stock-in-trade of a slew of Republicans, from California’s Issa and Missouri’s Todd Akin to Illinois’ Walsh, Roskam, and Schilling. In fact, during this congressional session — where the most bills put forth by Republicans were about women’s health — each bill received the unanimous vote of House Republicans.

And as in the Congress, so to in the 26 state legislatures now under Republican control, in which more than 1000 anti-choice bills have been introduced, and many passed, over the past two years.

While they may hide their positions under the cloak of religious freedom, we should be clear — it is about anything but. No one is telling Catholic women that they must choose abortion or use contraception (although all estimates say that 98 percent of Catholic women of child-bearing age who have ever had sex have) but the law does say that the vast majority of non-Catholics who use or work for Catholic hospitals and schools should not have to give up their religious freedom and beliefs (nor their right to full health care) in order to keep their jobs.

Nor are there any Republican-sponsored bills to compel Christian Scientists to vaccinate their children or bills that outlaw vasectomies. It is somewhat ironic and important to remember that this is the party that, in 1960, railed against the possibility of a John F. Kennedy presidency, saying that it would violate the nation’s ethos and open the door for Vatican control of our nation.

What it is about is Paul Ryan and the other Republicans attempting to impose their personal religious views on the rest of us — imperiling women’s health and the separation of church and state on which this nation was founded. Women comprise approximately 58 percent of America’s vote. They can determine the fate of this election and, in doing so, will determine their own.

[An anti-war and civil rights organizer during the Vietnam War, Marilyn Katz helped organize security during the August 1968 protests at the Democratic National Convention. Katz has founded and led groups like the Chicago Women’s Union, Reproductive Rights National Network, and Chicago Women Organized for Reproductive Choice in the 1960s and 1970s, and Chicagoans Against War in Iraq in 2002. The founder and president of Chicago-based MK Communications, Katz can be contacted at mkatz@mkcpr.com.  Read more articles by Marilyn Katz on The Rag Blog.