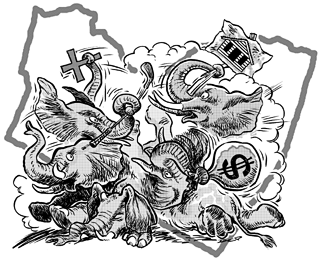 ‘The Republicans are leaving Obama with a mess…’ Drawing by Doug Potter.
Obama’s second term: ‘a diverse group of people are working on a progressive agenda within the Demo Party that demands a second New Deal.’
By Mark Rudd / The Rag Blog / October 9, 2008

I’m thinking a lot about the 2012 election, for Obama’s second term. All of his advisors are Clintonites, ie., Republican lite. They did nothing to reverse the privatization, anti-union, free market trend begun under Reagan, quite the contrary. They laid the basis for the current wars, accomplishing next to nothing toward diplomacy and international law. They will inevitably fail to rescue the economy from depression and will win no war in Afghanistan or anywhere else.

But meanwhile, a diverse group of people are working on a progressive agenda within the Demo Party that demands a second New Deal (with disarmament and international law). That’s our four year goal. It will take that long to set up an infrastructure for the Demo Party that will do what the right-wing think tanks did for the Republicans. They took power and held it for twenty years and dominated the intervening eight with a network that included university endowments, publications, prizes, fellowships, radio and tv stations, internet outlets. They even had whole universities of their own with schools to feed them.

Of course one big difference is that the Repubs for the last 35 years have had a single unifying concept, to shrink government (except for the military) and let the markets rip. The strategy was to create a coalition of ideological conservatives and Christian conservatives. What’s the left’s unifying concept? What’s its winning strategy? The most common formula I hear is the reversal of Reagan’s dogma: the state, as the concentration of the democratic whole, has the responsibility to use its resources to help the citizens and the planet. The coalition to achieve power for this concept is much less clear.

People in the progressive political class are beginning to build a progressive infrastructure in the Demo party. Good examples are Media Matters, the Center for Independent Media, with a network of ten statewide online newspapers. There are funding organizations coming into existence behind them. Many other institutions and outlets are in place, mostly small and on the young side, which is great. But this infrastructure needs to expand very quickly to challenge the center-rightists of the party, who have been in power since at least 1992, actually longer. They’re a legacy of the McGovern defeat of 1972. At the Democratic National Convention in Denver I saw no indication that this new progressive infrastructure was even noticed by those in power. Not even a tip of the hat. Tom Hayden says that not one Obama foreign policy advisor is an anti-interventionist or of the peace camp.

The Republicans are leaving Obama with such a mess that free-market, trickle down remedies will fail and will have been exposed as bankrupt, corrupt, and insufficient: the wars will continue, at least in Afghanistan, if Obama makes good on his campaign promise. So the reelection campaign four years from now will be an historic opening for the progressive agenda. This will be equally true if, perish the thought, McCain/Palin are elected. But in that case the right-wing populist movement—racist and militarist—will be much stronger than had it not been nurtured by the government.

Sooner or later there will be a power struggle within the Demo party between the progressives and the rightists, the Clinton/DLC wing. It won’t be pretty, but it has to be, just as the conservatives had to wrest the Republican party away from the Rockefeller wing. It’s still not clear who “we” are. This election will go far to solving that problem.

For over a year, Tom Hayden’s been urging people to think about the movement necessary to push Obama to the left. That’s our goal. The Obama field campaign has been making good progress at building actual grass-root electoral organization. I haven’t seen the peace movement do anything comparable in the last five years, have you? The top down, progressive infrastructure model has zero chance of working unless there’s a movement at the base. Obama has built that structure and will maintain it. We’d better be in it or near it or we’re out in the cold.

Is all this obvious and known by everyone, or does it bear further discussion?