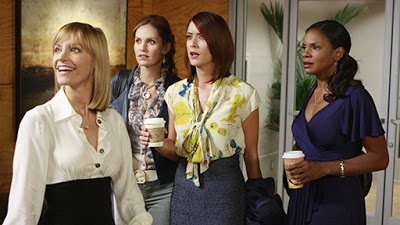 Reproductive rights, and the patronizing lectures that television depicts and Texas now requires.

Last Friday afternoon, I watched an episode of Private Practice that had aired the week before and was not all that surprised when one of the story lines focused on abortion.

The show, which follows the lives of a group of doctors in Los Angeles, has dealt with the topic a number of times before. It is clear that the writers and producers don’t just support a woman’s right to choose but are willing to risk alienating some viewers in order to use the show as a platform to promote reproductive rights.

In fact, though I often find the writing predictable and overly melodramatic (the show is one of those guilty TV pleasures), I think the writers have done a great job with the abortion debate. They have given characters a chance to express both sides of the issue but in the end they always present well-reasoned, and even well-researched, arguments for why the right to “safe, legal abortions, without judgment” is so important.

Still, I was struck by one scene in this episode which reminded me of the mandatory “counseling” some states are now making women go through before they can exercise their legal right to terminate a pregnancy.

The episode, “God Bless the Child,” focused on the clashing views of two OB/GYNs, Dr. Addison Montgomery, who performs abortions (and has had one), and Dr. Naomi Bennett, who is opposed to abortion for religious reasons.

A patient, Patty, comes to Addison with uterine cramping and stomach pains about a month after having had an early abortion. It turns out the procedure was not done correctly and the woman is now 19 weeks pregnant.

Addison explains that she can still legally have an abortion but that at this stage of the pregnancy it is a more complicated procedure. Patty decides to do it, but Naomi approaches her in the waiting room and pretty blatantly tries to talk her out of terminating her pregnancy.

During the scene to which I am referring, Naomi is bouncing her one-year-old granddaughter on her knee. Patty explains that she is not ready to have a baby:

Naomi: No one is ever ready to have a baby. You just do it. My daughter was 16 when she got pregnant with Olivia here, she hadn’t even finished high school and I almost, no I tried, to force her to have an abortion and I’m so grateful that she didn’t. (She looks lovingly at the baby.)

Patty: She had you to help her. My boyfriend, Charlie, couldn’t get away fast enough.

Naomi: That just proves that he wasn’t ready to be a father.

Patty: I can’t be a mother. I have nothing. I have to work all the time.

Naomi: Being a mother isn’t about what you have. It’s about who you are.

So, basically, a wealthy, well-educated woman is trying to convince someone who has had to put off graduate school to work two jobs that being a mother will be fine despite her lack of resources. If that wasn’t bad enough, she moves on to some of the manipulative tactics common to crisis pregnancy centers.

Naomi: At 19 weeks do you know that your child can hear you? It can be startled by loud noises. Your child already has vocal chords, and finger prints, and air sacs in her lungs. She can move her arms and legs not unlike Olivia here. (She looks lovingly at the baby again.) I know you’re confused, which is why I think you need a little more time to think about it.

First of all, a 19-week-old fetus is nothing like a one-year old child. The comparison is unbelievably manipulative, as is having this conversation with a baby in the room to begin with.

Moreover, the character of Patty was not at all confused. She knew that she wanted to terminate her pregnancy. She had made a rational decision based on the circumstances of her life; she had determined that she did not have the emotional or financial resources she needed to carry the pregnancy to term or become a parent.

Suggesting she was confused just because she wasn’t making the same choice that Naomi would have made is patronizing, belittling, and insulting.

And yet, state lawmakers all over the country are doing the same thing when they impose 24-hour waiting periods, mandate ultrasounds, and require “counseling” sessions.

I don’t know if it was irony or coincidence (or totally unrelated) but while I was watching this scene and becoming infuriated — the governor of Texas was signing a law that will force women in his state to sit through a similarly humiliating lecture before they will be able to have an abortion.

The new law, which goes into effect on September 1, says that at least 24 hours before an abortion is performed, a doctor must perform an ultrasound and then provide “in a manner understandable to a layperson, a verbal explanation of the results of the sonogram images, including a medical description of the dimensions of the embryo or fetus, the presence of cardiac activity, and the presence of external members and internal organs.”

Exceptions are made for women who live more than 100 miles from an abortion provider (they only have to wait two hours between procedures) as well as for women who were raped and those who are carrying fetuses known to have “irreversible medical conditions that will cause a disability.” Most women in the state, however, will have to endure the sonogram and the lecture.

When pushing for such laws (Texas is not the first state to enact one), abortion foes argue that they are just enhancing informed consent, making sure women know what they are getting into, and protecting the life and health of the mother (and the fetus, of course).

It’s obvious to me that what they are really doing is trying to put as many roadblocks between women and legal abortions as they can while they work on other fronts to overturn Roe v. Wade and eliminate the right to abortion altogether. What bothers me most about it, however, is how demeaning it is to women.

Most women who seek abortions are like Patty, they have made a well-informed, well-reasoned decision based on their own unique circumstances. Nonetheless, doctors are now forced to say, essentially: “Okay, but are you really sure? Before you really decide, look at this picture of your baby and listen to this description of her development. I know you think you want this, but why don’t you go home and sleep on it and come back tomorrow?”

These laws suggest — not so subtly — that women are not capable of making such decisions on their own. I can’t help wondering whether those who support these laws think women are capable of making any rational decisions. (And, on a slightly different note, whether anyone would ever impose a remotely similar restriction on men.)

In the end, the character of Naomi came through. When Patty affirmed her desire to go through with the procedure but admitted she was scared and lonely, Naomi came into the operating room and held her hand.

Somehow, I doubt the supporters of the Texas law will ever show women that much understanding or compassion.

[Martha Kempner is a writer, consultant, and sexual health expert. She has authored numerous publications for young people, parents, educators, and policymakers. This article was first published at RH Reality Check and was distributed by truthout.]