Martin Luther King in the Age of Obama : Why We Can’t Wait 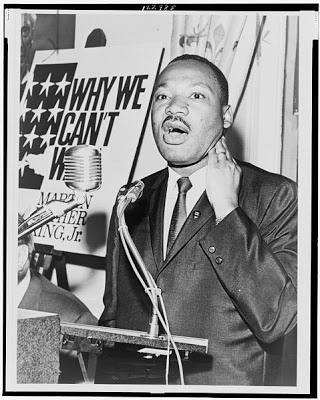 Elections do not deliver social change:
Reading Dr. King in the Age of Obama

Albert Boutwell’s election as Birmingham, Alabama’s mayor in 1963 might have signaled the end of the modern civil rights movement. As a moderate Democrat, Boutwell promised to temper the harsh repression unleashed by the city’s notorious chief of police and his mayoral opponent Eugene “Bull” Connor.

Mainstream leaders of the Black community were told to wait it out — let the storm pass and incremental changes could begin. Dr. Martin Luther King Jr. refused to wait. Instead, he launched Plan “C” (confrontation), a large-scale protest campaign that broke the back of Southern segregation.

Today, Barack Obama is held up as the logical outcome of the movement King led. Such a claim avoids a basic fact of American history. Elections do not deliver much in the way of social change. More often they provide sleeping pills — skillfully crafted illusions meant to de-mobilize, to dull the senses and to prevent serious demands for justice from emerging. King understood this process well.

One can assume that if King were faced with two active wars, 48 million people without health care and more than 20 million unemployed, he would be able to see through the illusions being offered at the top of the state. The good news is that a new movement for justice need not start from scratch — it can learn the lessons of history. The Civil Rights movement offers nearly all the instincts necessary for movement building — a skepticism about elections, an unquenchable desire for grassroots mobilization, and a firm conviction that the movement is operating on the side of justice.

King’s small essay entitled “New Day in Birmingham” should be seen as a blueprint to the pivotal Birmingham campaign. In it, he rails against the request by the white population to accept “polite segregation.” He views the election of Boutwell as less a sympathetic act by white voters, than an expression of how little they understood about the aspirations of the Black community.

When the hardcore segregationists dug in and filed a lawsuit to maintain themselves in office, even greater pressure was applied to the Black community to wait. The judicial process was then held up as the ultimate arbiter of justice. A simple formula was offered — the polite segregationists would prevail in court, Connor and his allies would be removed, and peace would be restored to Birmingham. According to mainstream commentators, all the established Black leaders needed to do was keep agitators like King out.

Instead of backtracking, King and the movement entered the city and launched 65 nightly meetings held at various churches in the Black community. Each was aimed at mobilizing the base of the community and exerting enough moral force to stiffen the will of local leaders. Freedom songs with provocative titles such as “Ain’t Gonna Let Nobody Turn Me ‘Round” captured “the soul of the movement.”

All along, King and others understood that, “we possessed the most formidable weapon of all — the conviction that we were right.” Mass meetings were the method to build what King called a “special army” of civil rights protesters armed with soul force not military force. Those unwilling or unable to participate in mass arrests still had a place in the movement, contributing to the organizational structure by answering a phone or running an errand. Community building and movement building were tightly linked.

Despite the energy generated by the mass meetings, King identified two challenges that threatened to stifle Plan C. “The Negro in Birmingham,” he argued, “had been skillfully brainwashed to the point where he accepted the white man’s theory that he, as a Negro, was inferior.”

The consciousness of inferiority bred a social paralysis fueled by fear. Authorities from Birmingham to Washington sensed this weakness and used it to market the idea that the proposed demonstrations were “ill-timed” and organized by outside agitators. Critics claimed to agree with the cause of civil rights, but to disagree with the tactics of this movement. This was a time, they proposed, for patient negotiations not impulsive escalation.

King cut through this Gordian knot with a simple, yet powerful argument. “It was ridiculous,” he wrote, “to speak of timing when the clock of history showed that the Negro had already suffered one hundred years of delay.” To the charge of being an outsider, he remarked that any American seeking to enhance the cause of freedom and justice ceased to be an interloper.

The pressure to abandon the mobilization, the precarious position of the hardcore segregationists, and the increasingly boisterous demands and bold acts from the Black community created a volatile situation. Small-scale sit-ins at white churches and segregated libraries began and a large march accompanied the opening of the voter registration drive.

On April 10, 1963, the final fuse was lit as the segregationists were granted an injunction to prevent the protests from going forward. The movement was faced with a difficult choice. Never before had they violated a court injunction, yet King knew that the segregationists had vowed to employ a “century of litigation” to force an end to the mobilizations. Things became even bleaker two days later as a court stripped the movement’s bondsman’s ability to issue bonds for bail. All bail would have to be paid in cash.

After another round of community consultations, King opted to escalate the campaign into its final phase. Connor responded by unleashing the police armed with dogs and fire hoses, to repress demonstrators, thus producing scenes of brutality that have come to define the Southern part of the Civil Rights movement.

King was arrested almost immediately and placed in solitary confinement for more than 24 hours. While in jail, King issued his “Letter from a Birmingham Jail,” now a seminal document in American history. On July 2, 1964, President Lyndon Baines Johnson signed the Civil Rights Act.

Such mighty historical moments were made possible by people “more concerned about reaching our righteous aims than about saving our skins.” No compromise would do, no election result could de-mobilize and no judicial decision could reverse the conviction that they, and not the segregationists or Northern liberals who preached patience, were operating in the name of justice on the right side of history.

Today, Americans suffering from the effects of a massive financial crisis would do well to familiarize themselves with the version of Dr. King that appears in the pages of “New Day in Birmingham.” This is no McDonalds “I Have a Dream” commercial. This is Martin Luther King Jr. as a militant, a self-described extremist for justice, and a brilliant activist dedicated to community building in the service of social change.

What this country needs most right now is a new “Plan C” that confronts the increasingly unbearable problems of lack of health care, homelessness and unemployment. The Civil Rights Movement is proof positive that no election or any judicial decision, no matter how slick the public relations scheme, can replace the powerful ability of regular people to create movements that change history and society for the better. Eventually, the time for waiting will end.